A busy and expensive Day

Unusual to sleep at another place. Jamesons Memorial. Place has history but that wasn't why I was here...

After all Planning had gone through my head, it was time for the new Equipment to show up - Industry had been working hard.
Fighters, a new Ship to haul Passengers and brand new Transfer services - and still the most well-stocked place in the Galaxy, 10% discount ain't too shabby.
Plus, there's Credits to burn and those don't grow children while parked in the Credit Balance.

Beluga Liner, good base price. Turns out she ain't cheap to kit by a far margin, but I didn't make the trip for sub-par gear.

The Federal GunShip... once again, I find myself revisiting it.
Don't know why, I paced that very Ship through (and beyond) its outer Performance Envelope more than once already.
But now she's carrying a Fighter and I'll soon have a Crew Member. Mixed feelings about that - but I can't resist.
Plus, what good is a Crew on a steady paycheck if I can't put them to good work?

The Diamondback Scout... Deja vu, we've met each other but eventually parted over her limited Internals.
But I do vividly remember Scanning new Expansions and their new neighbourhood for 61 and getting pulled out of SuperCruise by a Wing of 3...
The Diamondback Explorer did well - but not well enough. She's a pure Exploration build after all.
40% hull and a scratched ego is what remained after the egress. Sure remember that.
Thus, it's time for a dedicated near-field Combat Explorer, and that one thing I liked about that DBS is its ability to put up a good fight.
She'll be taking me to the local neighbourhood only, so she can be heavy. Inhabited Systems. Anarchy Factions. Interdictors.
No need for an SRV but good use for its fighting performance. This time, she'll be a keeper.

The Sidewinder. I know. I don't need it. But that's not the issue, not the case. I want it. Shipyard services increased my available space, so why not use it?
She's known for many things, but not for making her owner poor, nice cheap ride.
So although I know I'm being nostalgic, that Ship gets her kit. I wonder how fast she'll be if I take her on an Engineer tour? Going to be a long round-robin, but that'll be the case for the other rides anyway. No harm done.

Station is bursting with activity now, I wonder when the 1st CMDR is asking others to vacate a Pad.
Been a very long time since I've seen such a busy place - typical signs of living at the fringes for a long time now.
Looking at the (shockingly) reduced Credit Balance, I ponder the high activity level and occasional gunfire I hear outside.
Station is definitely occasionally giving someone a "live firing demonstration" out there.
Heard bad things about this place when it gets busy - and busy it is now. Local Top Bounty Board also looks like a few guys like to stay local.

Thus I look at what's parked. The fully modded Hauler I came here in sure won't put up any fight.
But... that little critter is fast, >600m/sec might be something I could find very useful as soon as I make my way through the mailslot.
And she's got Jumprange - something I can't yet see on my new acquisitions, those are Mil-Grade but non-engineered stock. Rebuy also looks very promising, should something go wrong.

So a "chicken departure" it is then. Grab what I came here in and have it Shuttle me back home.
All the shiny new toys will have to test that new delivery Service. Let's face it, they're not Mission-Ready yet anyway, at least not by my Standards.

Surrounded by Cutters, Corvettes, Anacondas, FdLs, Belugas and other heavy gear - and here I am slowly floating towards the Mailslot in a white Hauler at 90m/sec.
Scanner looks clear but I better double- and triple-check that. Little room for error in this tiny rig.
Passing the slot looks all good, just a few heavies testing out their Equipment or just arriving.
That noise though... coming closer. An F63, launched by an unknown mothership... Still floating at 90m/sec.
How big is that NoFire zone? Wait, huge Orbis Starport. That'll be almost 10km then please.
The CMDR name on that F63 sounds remotely familiar and the guy seems interested in my Hauler. Making a rather fast approach now - this could get interesting.

"Kill your Speed - not your Credit Balance" , so 90m/sec it is then - if that guy decides to go *splash* on me while speeding here, I'm still well within Station Weapons range, and that will interrupt my trip home quite abruptly... Don't need that.

The F63 veers a tad off though, more or less circling me. On a 2nd high-aspect pass it fires Chaff and rolls - so what the hell, I'll return that favor.
White Hauler rolling FA off and Chaffing like Confetti... still leeching forward at 90m/sec...
With that type of nonverbal salute, the F63 disappears back towards the Station perimeter - and I think I'll be out of that Speeding zone much faster if I tap Afterburner. Said, done, Hauler @ 600m/sec... that's more like it.

Back home the transfer will set me back by a nice bunch of Credits - but the fresh gear will arrive in guaranteed mint condition. Plus, that's nothing a nice Mining Run couldn't cover.

But before that, time for a familiarization ride for my very first Crew member. She's ranked Harmless but she ain't greedy.
Why did I select her over the more experienced Crews I looked at?
Because I'm getting old. She's young and looks good. Looks promising. 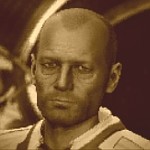