There are many reasons for becoming a pirate.
I'm sure that mine is one that many people have taken, the only reason why I'm writing this is to remind myself why I'm here.

Shortly after becoming a certified pilot and receiving the Sidewinder that we all get after graduating, ("mysterious benefactor" my butt, given the thousands of credits it takes to enroll, the least Pilots Federation can do is give us a ship.) I bounced around the bubble for a few months before heading back to my home in HIP 16607.

HIP 16607 is a system of ringed planets, hell, I'm pretty sure some of the moons even have rings. So you've probably guessed it's a mining system, pristine metallic rings, nearby docks, it's a haven for miners.

My parents were miners, they operated out of Thome Gateway, the only "proper" starport in the system, plus it was less that 3ls away from quality rings. I used to travel with them in the school holidays to the rings, staring in amazement as the little collector drones whizzed around, almost dancing through the debis.

Even back then pirates have always been a risk, luckily we had enough point defenses to scare off anyone interested in our cargo.

When I got back to Thome Gateway after receiving my pilots licence, I quickly realised that I didn't have the patience for mining, but that I could help the miners by protecting them. So that's what I did, I picked up a small Viper Mk4, kitted for combat with my earnings from my gap-year in the bubble and became a bounty hunter.

It was about two years later that everything changed.

For me, bounty hunting was less of a career and more of something I did out of a sense of responsibility. Mining was full of risks, if you weren't being harrassed by other ships or threatened for your cargo, then there was a real risk of a large rock deciding that your cockpit is the best place to travel the galaxy.

But then, as I was hunting, a stray multi-cannon round dinged off the shields of a System Authority ship as it passed between me and my target.

Suddenly I was surrounded by the Eagle which had gotten in my way and three Anacondas.

Now my Viper (which I had christened Ellie) wasn't some flimsy light fighter. The armour was rated higher than one of those new Type 10s and could certainly take a beating.

Not against three 'condas though.

So I was carted off to the nearest prison ship about 30ish light-years away to pay my fine.

And that's where I got stuck. Literally.

Ellie had the smallest FSD availble as it was just for use in-system, she wasn't going to leave HIP 16607, ever. She couldn't make the jump to the nearest star, and the local authorities turned a blind eye to my pleas for help. I spent three days fiddling around with Ellie's FSD trying to squeeze an extra light-year out of the drive, just enough to make one jump to an inhabited system. In the end though I had to do the unimaginable, an embarrassment that will make me cringe for the rest of my life.

I called my parents.

To be honest, it was good to see them again, although the mock telling off and mickey taking was what I wanted to avoid in the first place. On the flight home I realised that although the owners of Thome Gateway considered me an ally and treated me favourably, and despite running numerous missions (mainly involving chasing down criminals), they didn't care about me.

That's when I lost my faith in them, and, by extension, all governments.

So after spending a week or two with my family, and giving Ellie a proper FSD, I took off, swearing I'd only work for myself.

I had this urge to rebel, to fight the system, I decided to become a pirate, to go against evertyhing I had ever stood for.

It took nearly 200 light-years of self-reflection to decide to be a pirate, 194.64 light-years to be accurate, the distance between HIP 16607 and my new home.

If HIP 16607 is a miners paradise, this place is a pirates paradise. Anarchy, with plenty of ships carting diamonds and more stations than you can shake a discovery scanner at.

And Ellie is loving it, maybe it's the fact I've removed all the amour plating and she doesn't weigh as much as a small star (it most definitely is, HRP's are insanely heavy), but she just feels happier.

Plus I'm not risking anyones life doing this, which eases my conscience.

I guess it's a pirates life for me!
Do you like it?
4
Shiny! 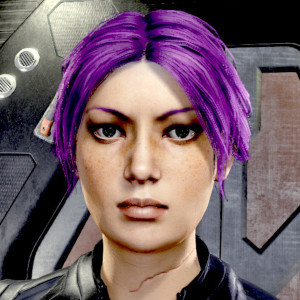