"Tread very carefully, first time you go into a combat zone..."
TripleRazor's words rang in her mind as she cursed and slammed Danse Macabre round. The Chieftain shook as incoming fire slapped into the shields.
"Remember everything, no matter how big or small, is going to be much better protected than your average pirate. And well-armed too; they sure do love their plasma accelerators! Pick your targets with caution. Ships you would normally tackle without a thought will kick your ass."
And already she had had to hastily retreat twice, tail between her legs, for exactly that reason. Other times were when another opponent had suddenly joined in the combat. TR had warned her about that too...

"Target's shields offline," reported the COVAS. Kodeyne pressed home the attack. A not-so-humble Cobra Mk3 managed to evade her guns.
"Come on!" she growled, rolling the ship and arcing round. The next salvo was on target. Burst lasers and multi-cannons tore into the Cobra's hull. It replied with a glowing ball of plasma. Her shields dropped further. "Bollocks!" she yelled. All this to get access to one of the Engineers. Ishmaak. He wanted proof of 'worth' - fifty confirmed combat bond kills.
She had six so far.
Fifty seemed impossible.

On the plus side, it was weirdly soothing, the frantic fandango of gunfire and evasion. Her mind was confused of late, angry, relieved.
The knowledge that she did, in fact, have a living mother had stunned her to the core. At the same time, rage and sorrow over  the birth mother who had died; the vanished father; the thief who had taken Niugnep's precious frozen eggs and sold them.  The absolute concentration needed in the middle of a dogfight, the adrenalin - her troubled mind could blank out these things, just for a little while.
The Cobra finally exploded. She barely registered the amount paid as it flashed up in the HUD. She boosted Danse Macabre away, to let the shields recharge, and to choose the next opponent.
She was finding out the three things you needed in a combat zone: lots of firepower, bloody good shields and a shitload of patience.  The ship was ready to fight again. She let out a big sigh, turned around and headed back to the fray.
Do you like it?
8
Shiny! 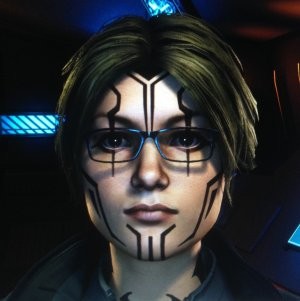