It is fun when someone wows to spend their time and energy just to kill you!

I and my clan have been at war with Civitas Day since late October. Lately we have started to come out with the winning hand in PvP enconters and apparently this has pissed our dear enemies off. Yesterday a few well-known gankers visited me in a station where I was resting after the day's war missions, seemingly led by this Harry Potter character. They attacked me as soon as I excited the station, but I escaped. Two of them followed me to another system where I again escaped them without problems.

A little while later I and my clan were contacted by these criminal elements and they woved to get me. Apparently Potter was "asked by someone" to kill me while the others said they were attracted by the not inconsiderable bounty on some of my large ships after months of killing Civitas ships. So now I am apparently being hunted by a bunch of directionless gankers.

So be it, I have been through worse. These people have little to no honour and I will not be forced into a fight on their terms. Fortunately, I have better things to do.
Do you like it?
2
Shiny! 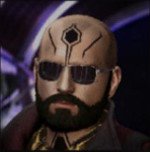