Caoimhe flipped on the video recorder and sat back in her pilot's seat, exhaling with a sigh of relief.  "Wow.  That was intense."  She straightened herself and pushed an annoying lock of hair out of her eyes.  "Remember how I said I kind of got distracted and was watching too much of this old tele-programme?  Well, two things..."

"First, I decided I needed to get going and thought I'd try out a neutron star.  Wowie-zowie!  I jumped one hundred and forty light years!  It was amazing!  But it did mess up my FSD a little, so I flipped on the AFMU -- only I forgot to drop out of supercruise first.  Whoops!"  She waggled a finger at the camera.  "Don't--Ever--Do--That!  It's like driving down the highway and suddenly throwing the car in to park!  I knew I wasn't unconscious very long because my dash was still on fire.  I got everything taken care of, thankfully, but my power plant now has a funny hum."

"Second, I found out I can watch these shows while flying!  I cane across an old logbook entry from our Distant Worlds 2 leader, Dr. Kaii himself.  In it he explains how to forward a video feed up in to your cockpit while you're flying!"  [OOC: sorry, only for VR players]

"Now, I'm addicted to a new show.  Something about dwarves and thrones and some sort of game. Anyway, am watching it as I'm heading to Waypoint 4. Yeah, I'm that far behind!"

[OOC: I really like V, but I tend to use Oculus Home's desktop app pinning more often because it's easier. But non-Oculus VR players might really enjoy V]
Do you like it?
1
Shiny! 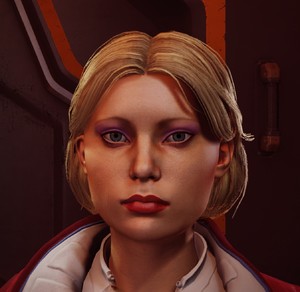