The floor vibrated with bass, as Mikael grooved across the bridge to the sound of instrumental funk. He normally only drank beer, but this justified some champagne. Glass of fizz in one hand, the bottle in the other.
His trip into the black had paid off - literally.  One hundred and fifty-six million!  And here he was, stood on the realisation of his plan.
Danger of Death. A Fer-de-Lance.

His encounter with Anmarie in Angus Manwaring had made him realise just how fortunate he had been to get away from the gang life. And even more so, after he had been given this second chance.
He had never meant to let it get so far out of hand. His parents were both career military types, and naturally had wanted their youngest son to follow that path. But he hadn't wanted that. Their absolute insistence had riled him, and that was where the trouble had started.  The same old, old story...hanging out with the wrong types, skipping his studies.  The usual teenage bullshit. It had all spiralled out of control before he realised it, and ended up in jail. His parents had not disowned him, but their shock and disappointment had been clear to see.
He paused to refill his glass, and reflect on things.  He guessed his family would know he had been released; he had not felt like making contact after being sprung. The anger of his younger self towards his parents was long gone. Had he 'learned his lesson?' Certainly.
And now he would 'pay his debt to society'. Just not in the way most people might think. He would still trade and explore; but with this ship, he intended to make up for his previous life. The upgrades were completed. The trip round Engineer workshops was done. Danger of Death was as ready as it could be.
And so was he.
Do you like it?
4
Shiny! 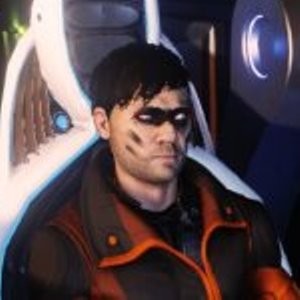