A little shy of a week I've been out here, bored out of my mind digging through Guardian Ruins.  Scanning beacons and keys and jump starting data terminals, the whole thing.  Hopping to and fro all across guardian space, but I've finally loaded up on all the data and blueprints and scrap to get me started kitting out a ship.  Nothing really interesting on that front.

But I've been using the Prospect as my base of operations.  It's pretty well equipped for a small station.  It sits in a low orbit right above a guardian site.  It's the home of the Zende's Partners' guardian artifact drive, those are the guys behind the megaships as well.  They've sunk an awful lot of cred into this system, and they are almost the only game in town.  So, imagine my surprise when I started getting active conflict zones popping up on my sensors while cruising through the system.  The Segnen Exchange is operating in the system as well, I'm not sure what they do.  Maybe they are logistical support or something.  It's a corporation, but they seem to be associated with the Empire in some way, they have similar radio protocols.  Anyway, that's neither here nor there, whats interesting is that Zende nor Segnen are offering official missions out here, at least not through any channels I've seen.  They are paying the combat bonds, but you don't see any official representatives offering me direct cash for blood like you usually do it normal, upstanding wars.  I wonder why.  Another secret war, I love those.

Zende excerts control over the system with about a 2 to 1 ratio, which sounds like a lot, but since their only two factions I'd expect it to be much more.  That means that there isn't much chance of a turn over now, but if Segnen can get a few consistent battles it will be easier to lead to more and more opportunities.  With no other factions fighting over the smaller piece of the pie, every victory cuts twice, first as a win for Segnen, second as a loss for Zende.  And, I don't really like when corporations just through credits around to influence the galaxy, so naturally I'm flying for Segnen, kicking ass taking names.

Well, not exactly.  I still am out here in my smallest ship, after all.  I've gotten used to just melting through ships with my more combat worthy vessels, mostly what I do is pack tactics.  My weapons are outclassed, so I can't slug it out with these ships.  Instead I hit a ship hard and then dance around it until the Segnen regular fleet sweep them up.  Very slow going, but I've moved the needle in each battle I've fought yet, but I'll fight more tomorrow before getting back on the bus and going home.  Slow work, but honest work.

In a few days I should be in my ship with some prototype guardian stuff, then I'll fly that around to get the stuff I need to finish it up.  May write a log then, maybe wait until it's all done.  We'll see.

Additionally, what's up with Zende naming their things 'The' this and 'The' that. What's next, they release a new guardian tech weapon called, 'The Gun?' Or their ships called 'The Fleet?'
Do you like it?
2
Shiny! 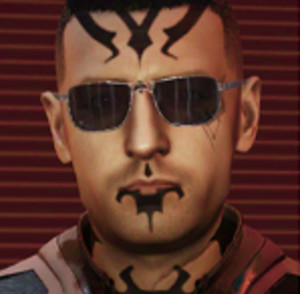