I'm kicking back in Apostrophe, the establishment next to Jaques Bar in Jaques Station, Colonia. The colour of the neon sign on the wall outside matches the one on Jaques Bar and, butting up against it, adds an air of grammatical correctness to the neighbourhood.

Yes, I could be next door, and I'm even rich enough to frequent 'Tropic Scena, the exclusive club for the ultra-rich. What with earning all that money from Amaryllis Dood and saving Colonia from the Strang clan's attempt to overturn the current economic order with an antimatter missile attack, the grateful ruling factions expressed their gratitude with the key to the 'Tropic Scena executive toilets.

I could be elsewhere but I prefer the anonymity that Apostrophe provides. The lighting is subdued, the music is loud enough to render conversations private, and the drinks are surprisingly palatable.

I holster the gun I've been holding under the table and lean back, relaxing. I've just terminated the contracts of my last two pilots; the gun was insurance in case the situation became awkward. I've dismissed them because they are redundant, having recently fitted out the last of my passenger ships with the very latest autonomous navigation system.

Travelling incognito to Colonia with the Christmas Carriers' Convoy, I had flown an Orca in the guise of a travel agent. Despite the stress of the job I had learnt to love the ship and that got me thinking about a change of lifestyle and a change of pace. The life of a private detective is often precarious and unsettling, spending months almost penniless and then rubbing shoulders with the rich and famous when they needed the services of a discreet investigator.

I'd already incorporated Linton Travel as a business so it was a simple matter to start running local tourist and transport missions throughout the Colonia region.

The business grew rapidly; Colonia was expanding and its population was keeping pace. There were always people wanting to move around. New arrivals were curious about the history of Jaques Station; miners, technicians, medical staff—they all needed to get about. I bought more ships—a fleet of Dolphins is not that expensive, a few more Orcas and, the pride of the fleet, a Beluga.

Of course, I needed to recruit commanders to fly them all and, luckily, there was a ready supply of Ubi pilots who had made the mistake of not disembarking before Jaques Station's fateful attempt to jump to Beagle Point. Disconnected from their dispatcher and without the wit to start their own businesses, they came to me. I sat them at the controls of a brand new passenger transport and put them to work.

I saw opportunities to diversify; a chain of boutique hotels came onto the market and I snapped it up; and for those tourists who wanted to cater for themselves I introduced Space B&B. Plenty of explorers based here don't mind renting out their accommodation while they're out discovering new worlds and boldly going etc. They trust me to vet the clients and keep their places clean.

Pretty soon I didn't need to fly anywhere myself, and I have to say, I don't miss the Repairs Concluded tourist beacon; there are only so many times you can tell the story of Jaques Station and answer the dumb questions; pretty soon you get jaded and cynical and that's not good for business.

Anyway, the business administration was occupying me fully and I couldn't afford to be away from my office for any length of time. Then along came autonomous navigation—ships that flew themselves. Using the Galactic Positioning System it was possible to select a set of waypoints and wave goodbye to your ship which would faithfully fly the course you had set and come home at the end of the journey. There was some resistance at first—a ship without a pilot—but the approach was gaining traction as the space-miles without incident were clocked up.

Of course, I no longer needed the pilots and as each ship was fitted out I dismissed its commander. That didn't make me very popular but business is business.

So, here I am, me and my expanding paunch, having an easy time. Life is sweet... 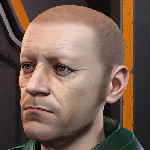