Many years ago during the ill-fated Apollo 13 mission, Jack Swigert, the command module pilot radioed mission control in a panic. Instead of being a breathless report of some new life-threatening failure, Swigert's problem was something far more prosaic: he had forgotten to file his taxes before the deadline and was trying to file an extension-- from space. Later on in the mission, during a congratulatory message to the crew, then-president Nixon quipped: "Don't worry about it. I happen to know the collector."

There are things in this universe that are unstoppable, unavoidable, and if you try to run from them you only die tired. Revenue services. Debt collectors. Jury summonses.

So it goes. Cybele's Reverie, basking in the soft blue-magenta glow of the Veil nebula. Remlok suit airing out on a rack over a vent. Dimmed, night-vision lights sparkling over the Saud-Kruger logos in my cabin. With the room heaters on, the ship only gets up to 13 degrees centigrade when it's parked in the shadows for some downtime, so the cool floor against my bare feet is a bittersweet inevitability every time I get out of this warm bed. It's a shock, but it's a tactile connection to the ship that's eroded by being sealed in a bodysuit for hours on end.

Hutton mug in hand, freshly brewed coffee firing up my synapses, I barely caught the fullness of what Calliope was trying to say as she headed aft towards the vehicle hangars. Message, something, whatever, I'll see it when I get to it.

Sure enough, there's a new message notification. It's not from the Pilot's Federation, not from the MCRN, but from the Federal Congress. It's a jury summons. A jury summons! All the way out here! Hence, it looks as if I'm going to be running through the rest of these waypoints on this expedition solely so I can rush back and get my civic duty out of the way. I'm not even a federation citizen, but such are the "perks" of being allied to a faction.

Ticking off the days before I'm going back home to Colonia.
Do you like it?
1
Shiny! 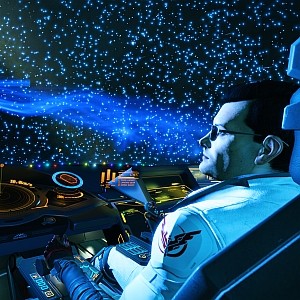