Before we get into the log, I would like to address the many applications I received for my post named Commander With Long-Range Cargo Ship Required.

I was beyond shocked to find out there are so many Billionaire-Fitness Model-Scientist-Commanders with hairdressing skill out there. I’m even more amazed that plenty of them are willing to take so much time off from making sound investments while striking a pose and contemplating ways to overcome the intrinsic limitations the human race is facing, just to bring me my shopping out here on the rim. The Billionaire-Model-Science crowd really are a cut above the rest of us. I am a little confused as to why so many of you endlessly eager Commanders would send along pictures with the application for the job.

Some images of a well-maintained ship with cargo bays stuffed to the gills with gateau, wine and other luxuriant amenities really would have helped me pick a Commander when I was down to the last few.  However I did not expect so many professional-looking portraits, and images of other.. .. body parts. Tell me, is this how you people apply for say, Bulk Data Transport jobs? If so, does it work really well, like do you get higher pay? Coz if that works out great for you, I STILL WOUOLDN’T DO IT! What’s wrong with you oddballs*?

Needless to say, I have convinced a friend of mine to do a resupply run for me and when I get home, I’ll be avoiding anyone that has a professional photographer on retainer, and people that always have a quality camera on hand.  Now, let’s start the log


A Neutron star is a fear-filled temptation for me. I’ve been trapped between the gravitational pull of the star and the push of the gas jet before. I did a short journey before I set out on this expedition because Professor Palin wouldn’t talk to me before I proved I was the traveling type. I had to get a good distance away from the bubble to demonstrate my exploring chops, so I decided to use the Neutron high way to get the job done quickly and get a taste of what I’d be facing on a long trip.

I was doing very well; I’d got far outside of the bubble and enjoyed the experience of charging the jump drive and plotting my course to the next Neutron star to do it all over again. After Palin contacted me to say he would allow me to visit, I turned around to go home eager to get my thrusters tweaked and test out my new speed. That’s when complacency set in and the star got me. I had failed to get my drive charged on the first pass, and I just turned around and headed straight for the cone without rounding back to the star and joining the flow of the jet. 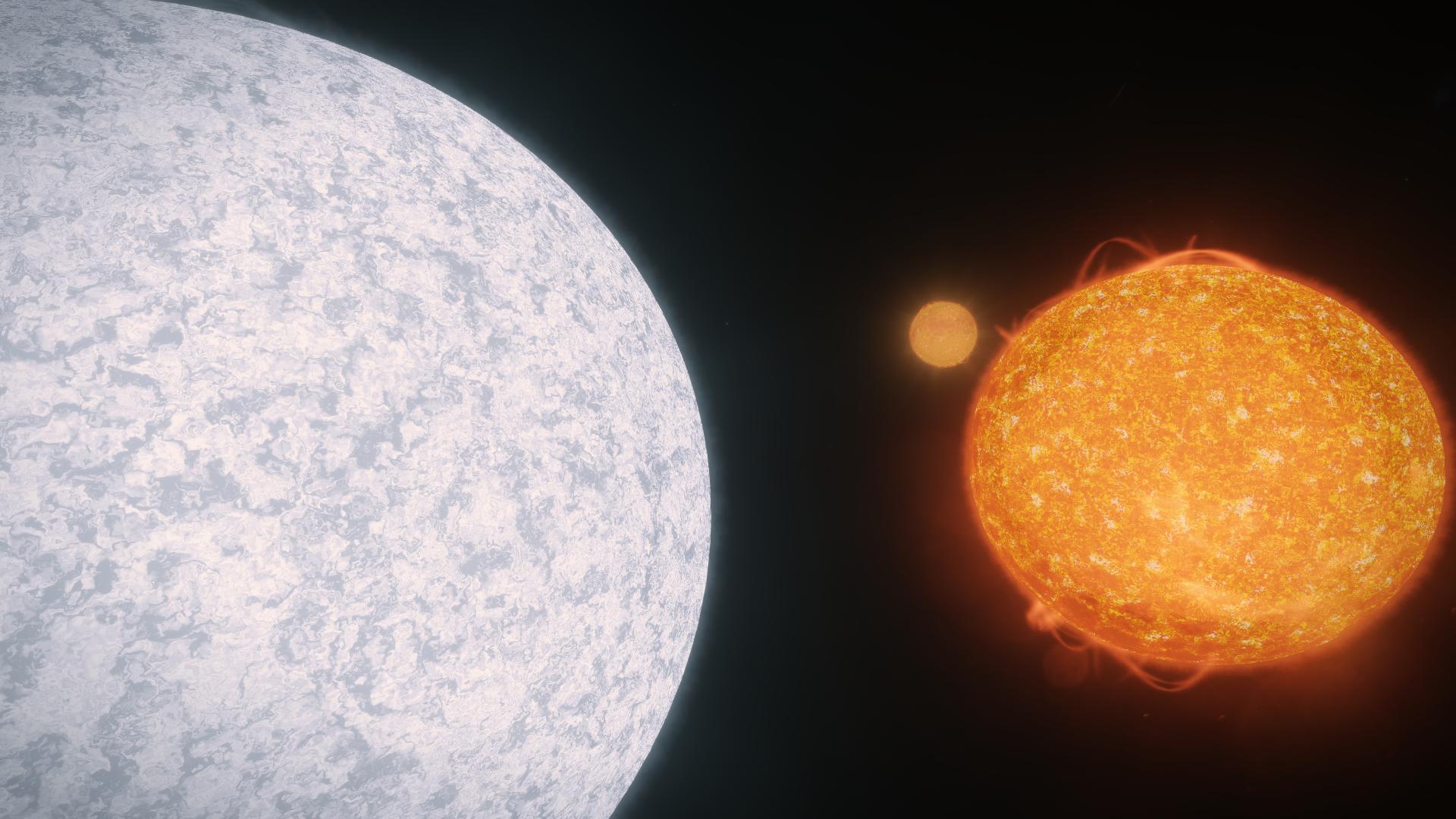 My drive charged quickly but I was trapped in the cone. It’s the second scariest thing that’s ever happened to me in the depths of space. Escaping a pirate with next to no hull and a total lack of canopy was deeply distressing. Add to that I had to hyper glide to a station with nothing but my helmet between my face and the entirety of existence coming at me with unbelievable speed. Just to top it off, my air supply was less than 20 seconds when I entered the station, and seven seconds when I finely landed. That will remain my scariest experience.

However being buffeted around in a jet cone with no control, warning lights blinking on every panel and Holly’ (Leo’) calm voice peacefully telling me what system has malfunctioned this panic-filled second is going to be with me forever. When it happed, I just stared out the canopy and helplessly glanced at the controls. I had not a single thought in my head; nothing came to mind at all. Honestly, I was a total blank for a good while. Out of nowhere, I remembered hearing a pilot can boost out of a jet cone with a lot of luck so I just hit the boost. The stick felt useless no matter what I did, the jet cone was in charge of what direction I was facing. Timing the boost is impossible because your facing is random when the boost kicks in and you have very little idea of what direction you should be heading anyway, however I kept trying.  Just as I was ready to make my peace, the boosters came back online and I hit it one last time. I was so relieved when I just happened to get it right and I was freed from the jet. 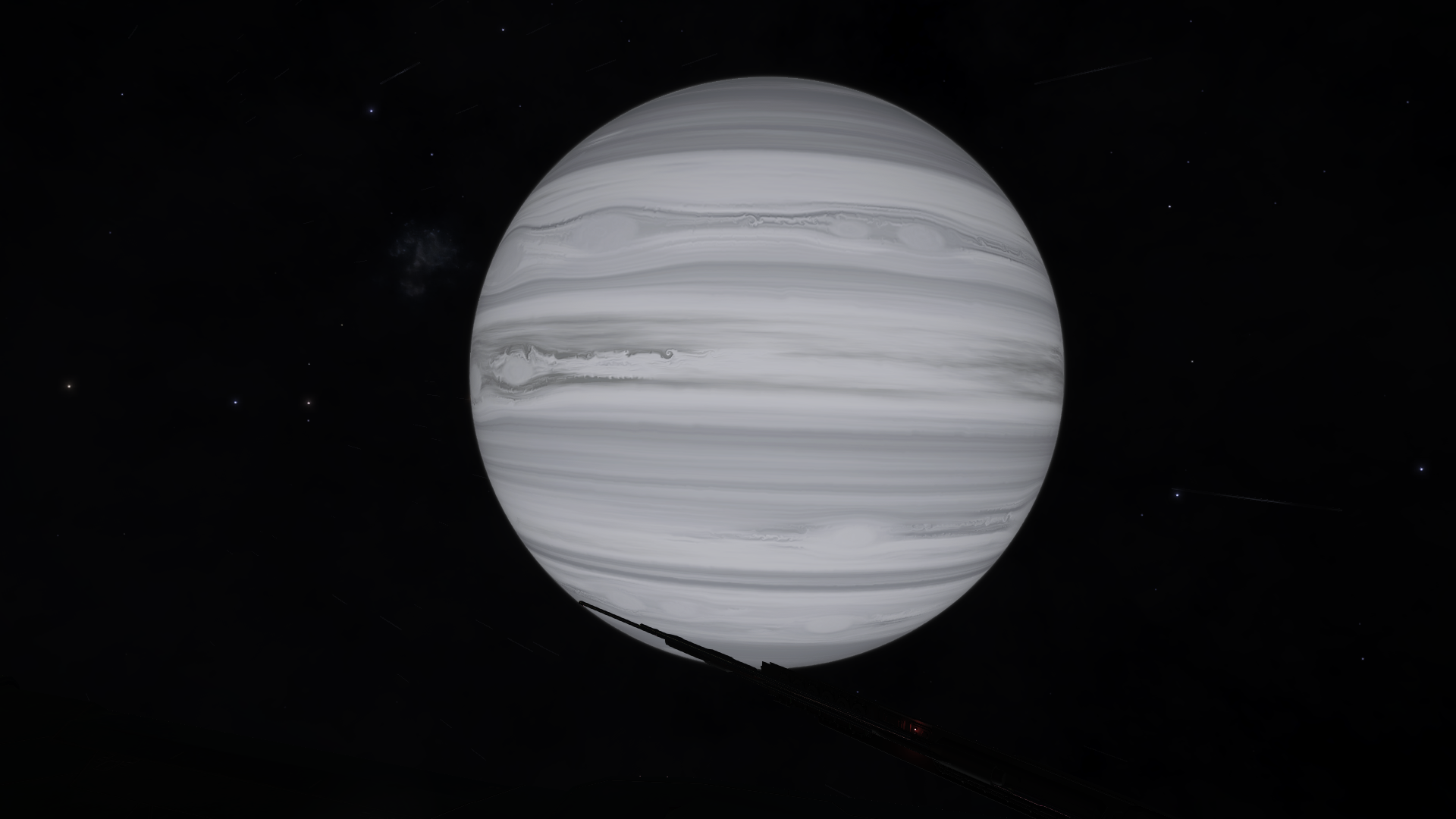 My ship and my nerves were only just holding together, so  I promised myself and the Reach we would never use a Neutron boost again. The slow limp home (because I didn’t take any repair systems) drove in the importance of that promise. Knowing all that, you can imagine how this view impacted me after almost four months of Neutron free jumping. 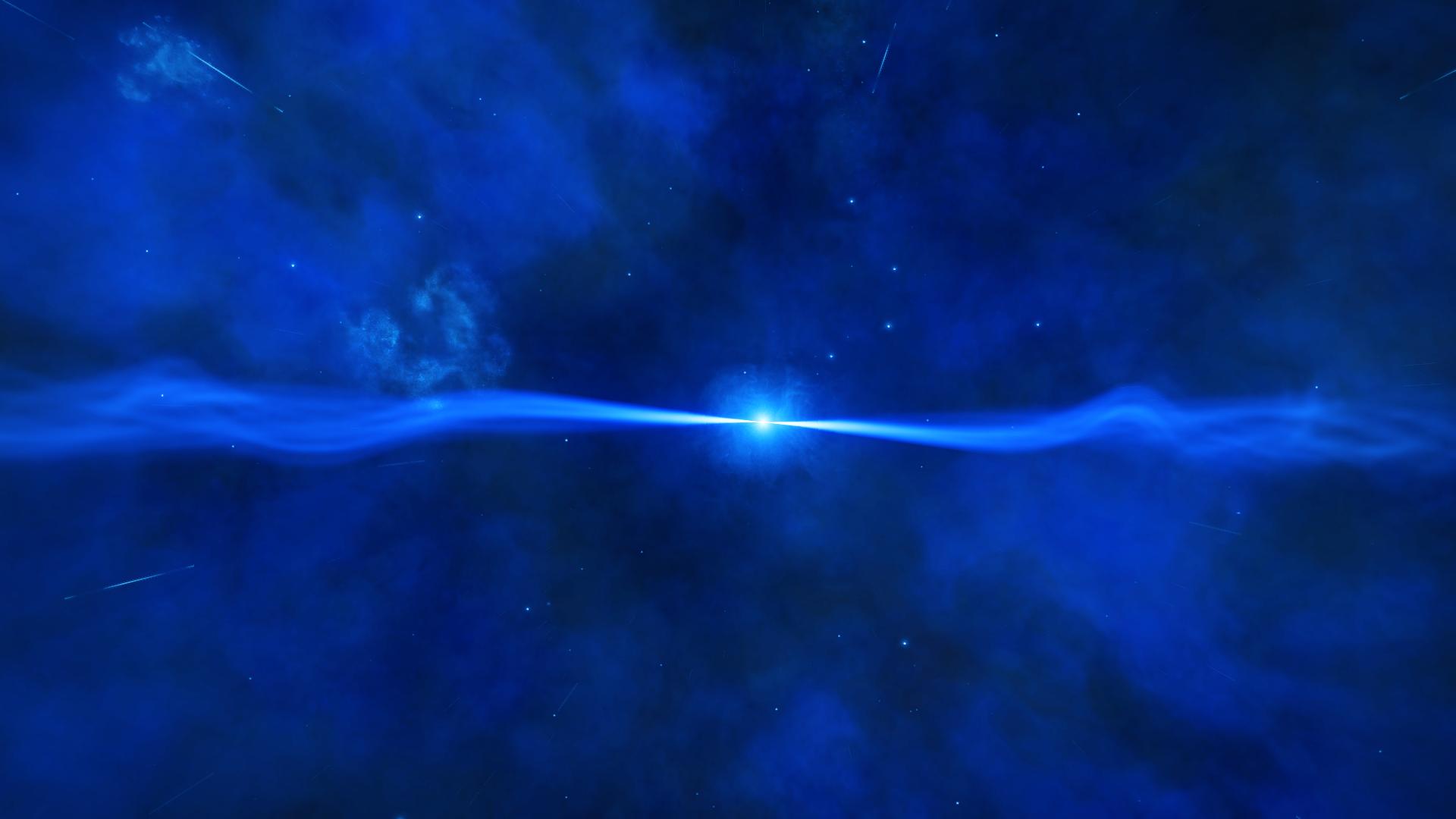 I just sat there for a while looking at it and contemplating whether or not to use the opportunity. To be fair to this eye of terror, it is a good example of a Neutron Star and a great view. The entire system seems to be filled with a miasma of blue gas making it feel like a mini nebula. I decided to go for it in the end. I know what I did wrong last time and played it safe. I needed three passes to get charged, but I managed it and took a welcome long jump. It can get quite hard to plot a route along the rim because the stars are sometimes few and far between, so this lil range increase came along at a good time. Well, it turned into a Neutron-a-thon after that. I randomly came across two more and used one of them to bypass another abyss of starless space and it dropped me in a system with plenty of oh-so-thrilling ice bodies. One of them however has a good few biological signal returns, and as I sit up here before starting my orbital approach, I see it’s also thick with canyons. I feel another high risk, high-speed canyon run coming on. 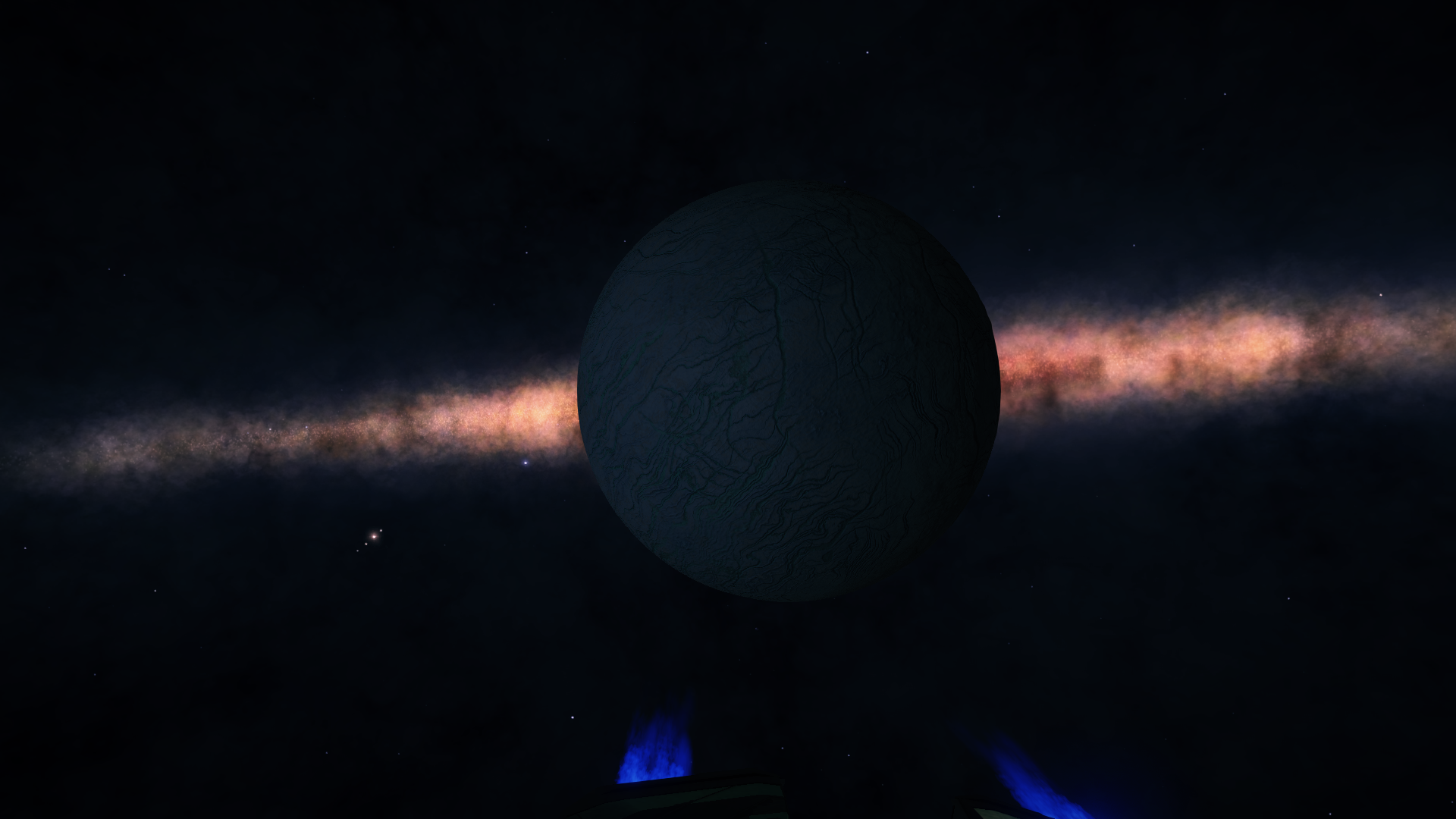 I should know better, after all I could die out here but .. .. ya know. Some things just have to be done. I can’t go down to investigate an interesting scanner return and just ignore the trenches fate has provided. I’m only human. 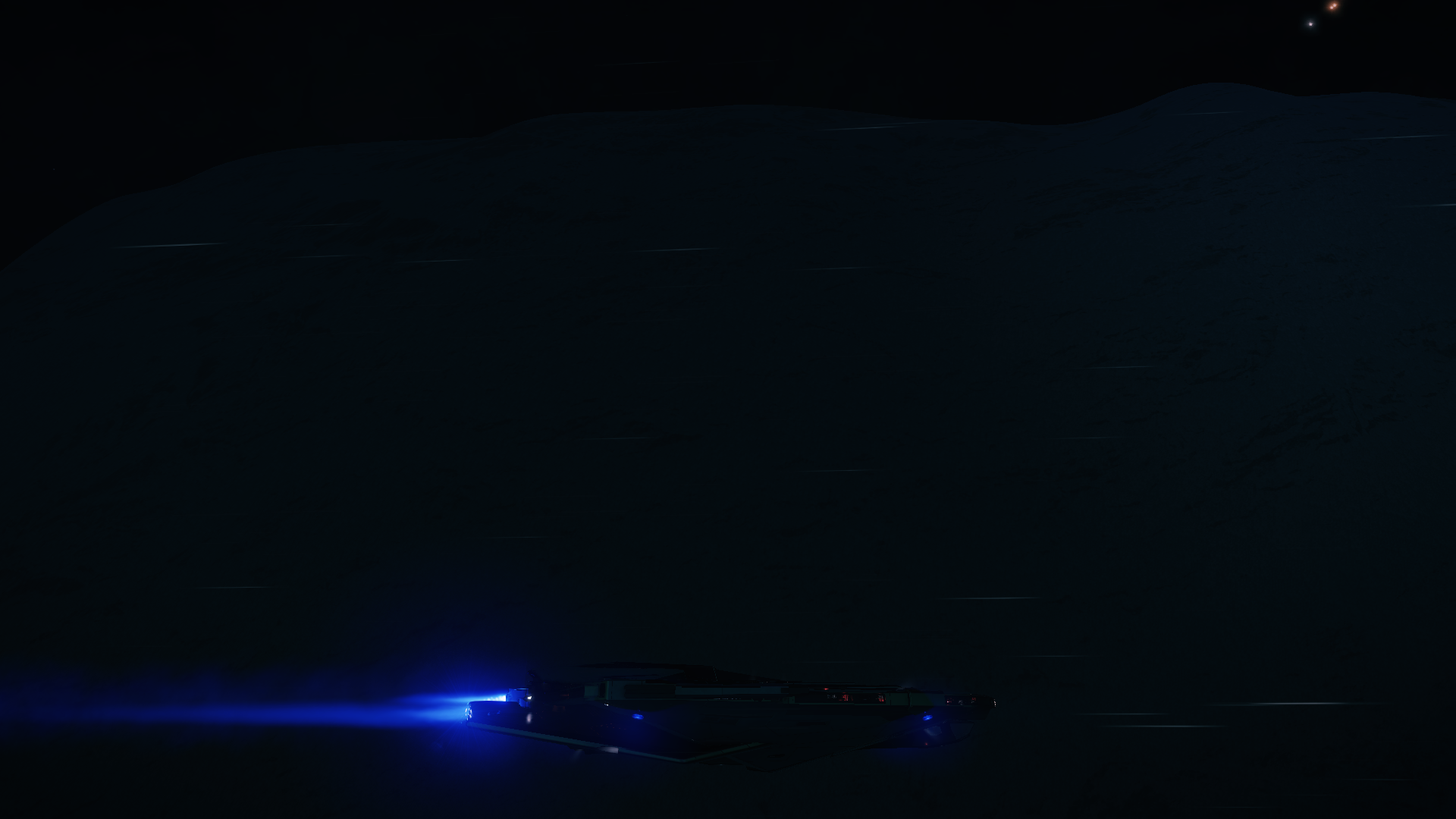 Wow, that was exhilarating! This trench was deep and dark. Flying it by the Reach' headlights is a white knuckle thrill-ride. It was going well and I was leaning in my chair with every close pass and swift turn. My bottle for more risk-taking left the second time I smashed the shields and grazed my hull on the canyon wall. On the last impact, the force pointed the nose of Mercy' Reach skyward and I took that as a sign to lay off the daredevil act and head for low orbit to pick a biological return to investigate. It's a very good thing the canyon run was amazing because the biological site was just a crystal forest again. 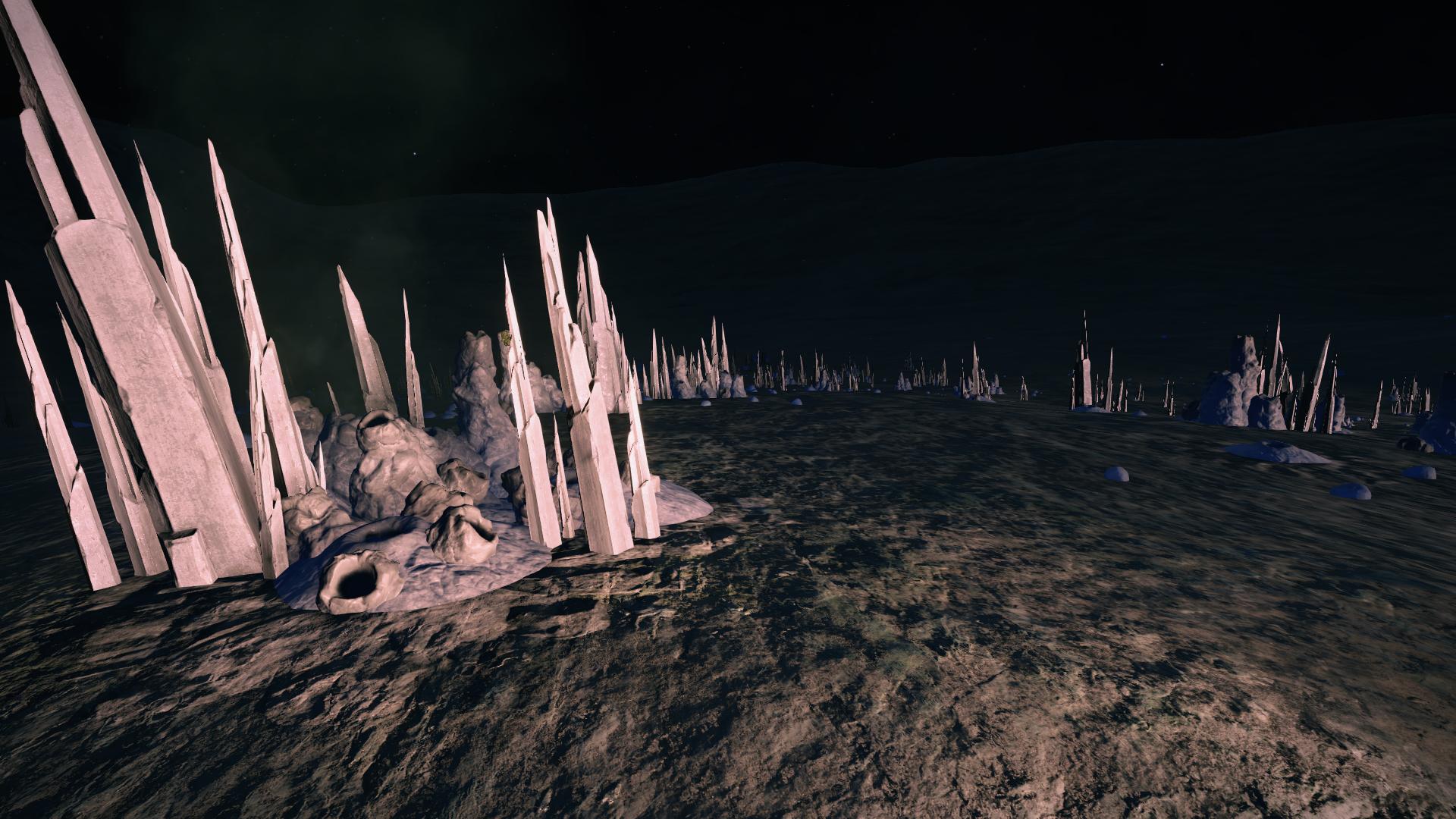 Not many jumps beyond that amazing trench run, Holly alerted me to a star type new to my computer. Apparently, this is the seldom seen AeBe star. Just look at this prime example of orange, so much like an earthen sunset, bright and orange. A luminescent orange hanging from a dark stary tree. It's just another orange star. Something hard to find has no right being so pedestrian. This thing should be a superstar that spins like a top and has golden red go-faster stripes that whistle when you get to close. This thing, while nice to find is just lazy and needs to buck its ideas up. By this point, I was getting close to bedtime. I didn't turn off the drives until I'd compleated my jump quoter and on the last one, I found.. .. 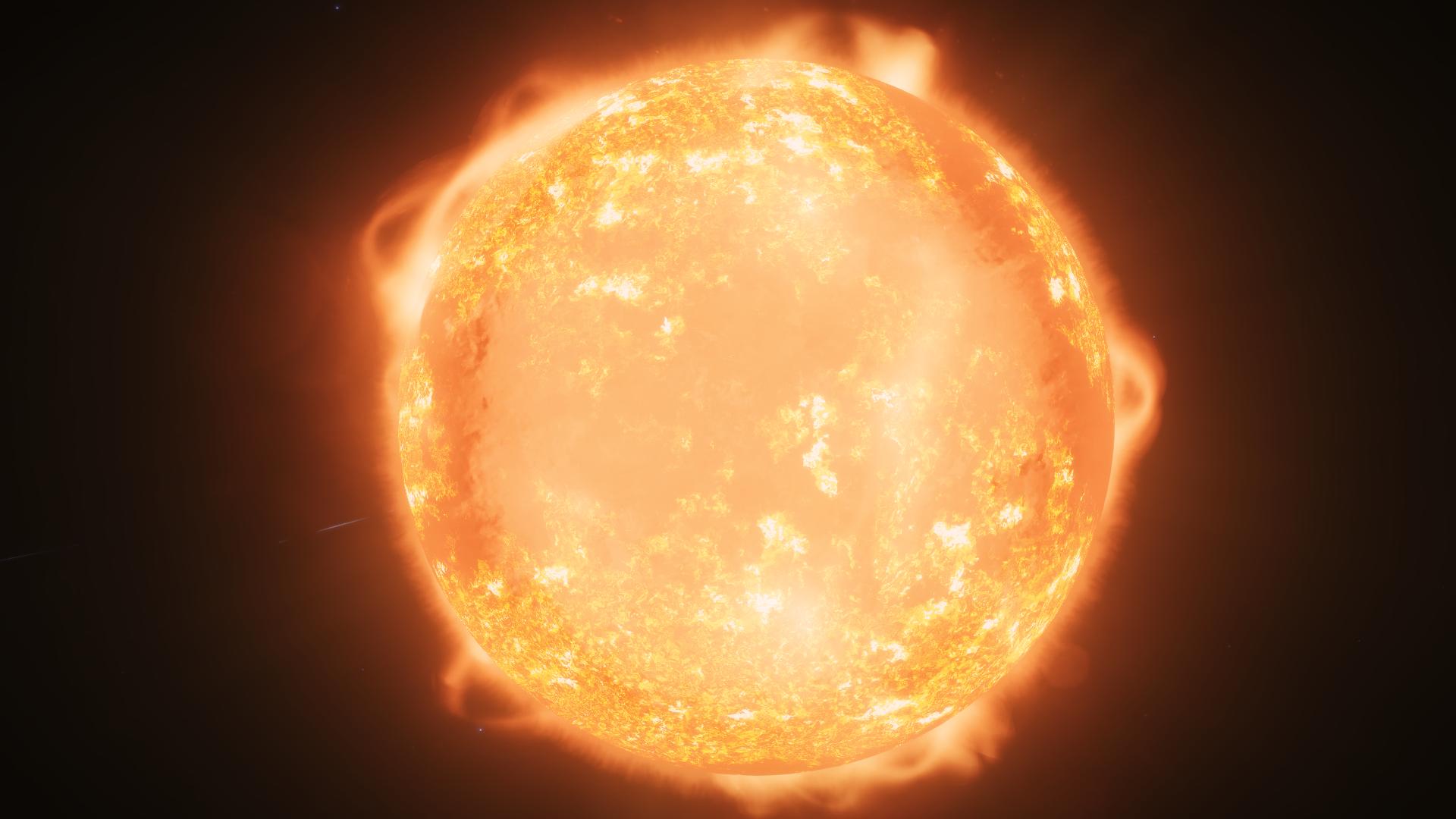 .. .. This. Another Ice body with biological returns on the scan, and many many trenches tempting me in to risk my life again. I'll go down there tomorrow in hopes of finding something more interesting than a bunch of crystals with some vents. 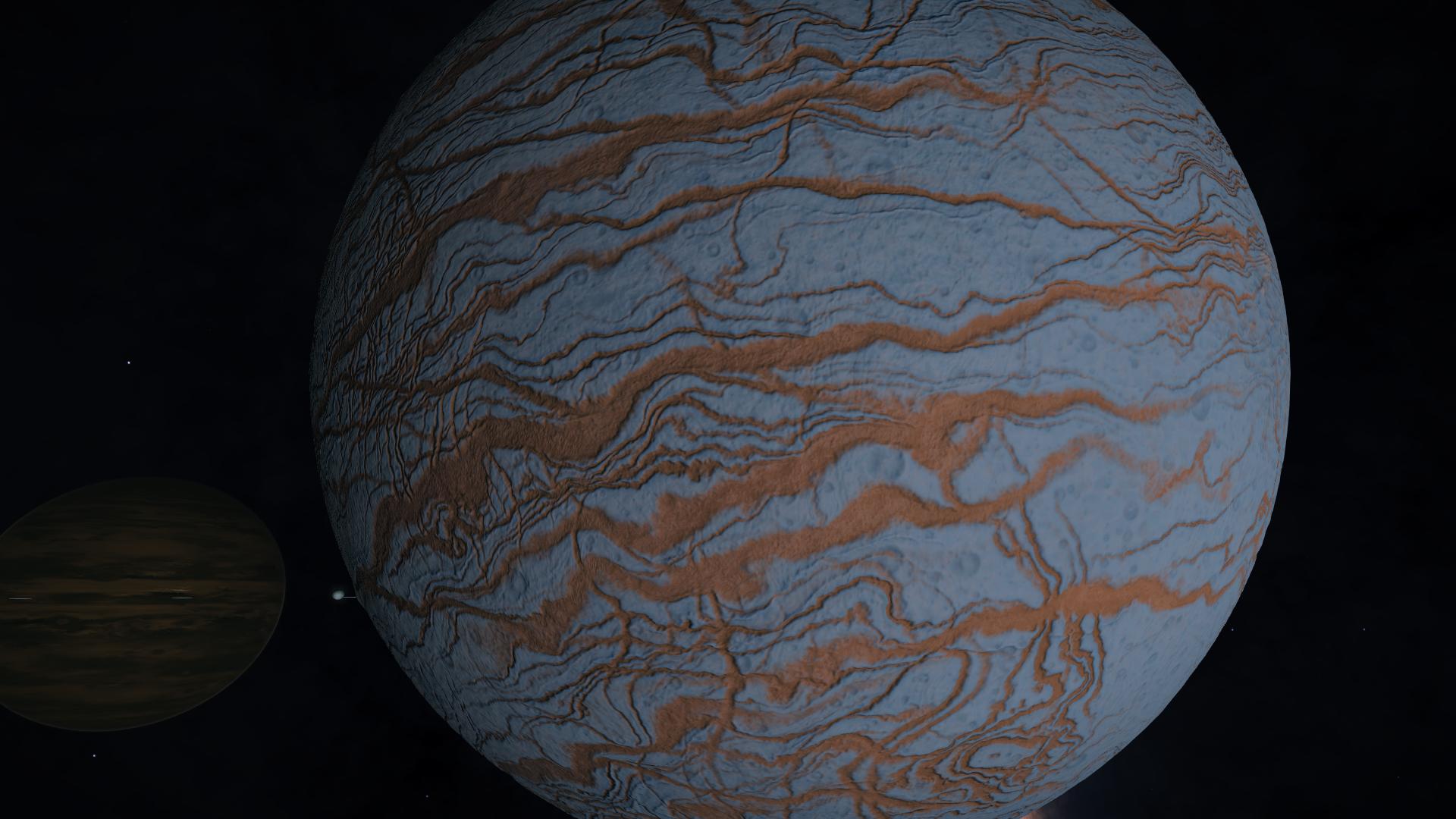 Well, I have unintentionally made this entry much longer than usual. I was aiming to make a bumper read for the twentieth log and I only just realised this will be the 20th. It may not strictly be the twentieth expedition entry, but its close enough. I want to take this chance to thank you all for reading my musings, not just because tomorrow I will be risking my neck speeding down another canyon and this could be the last entry, but mostly because the feedback I receive and the "shiny" appreciation always lifts my spirits and gives me the drive to carry on travelling to find inspiration for the next log entry and chance to communicate with all of you.

Thank you, Commanders and I hope to fly with you when I come back to (un)civilised space. 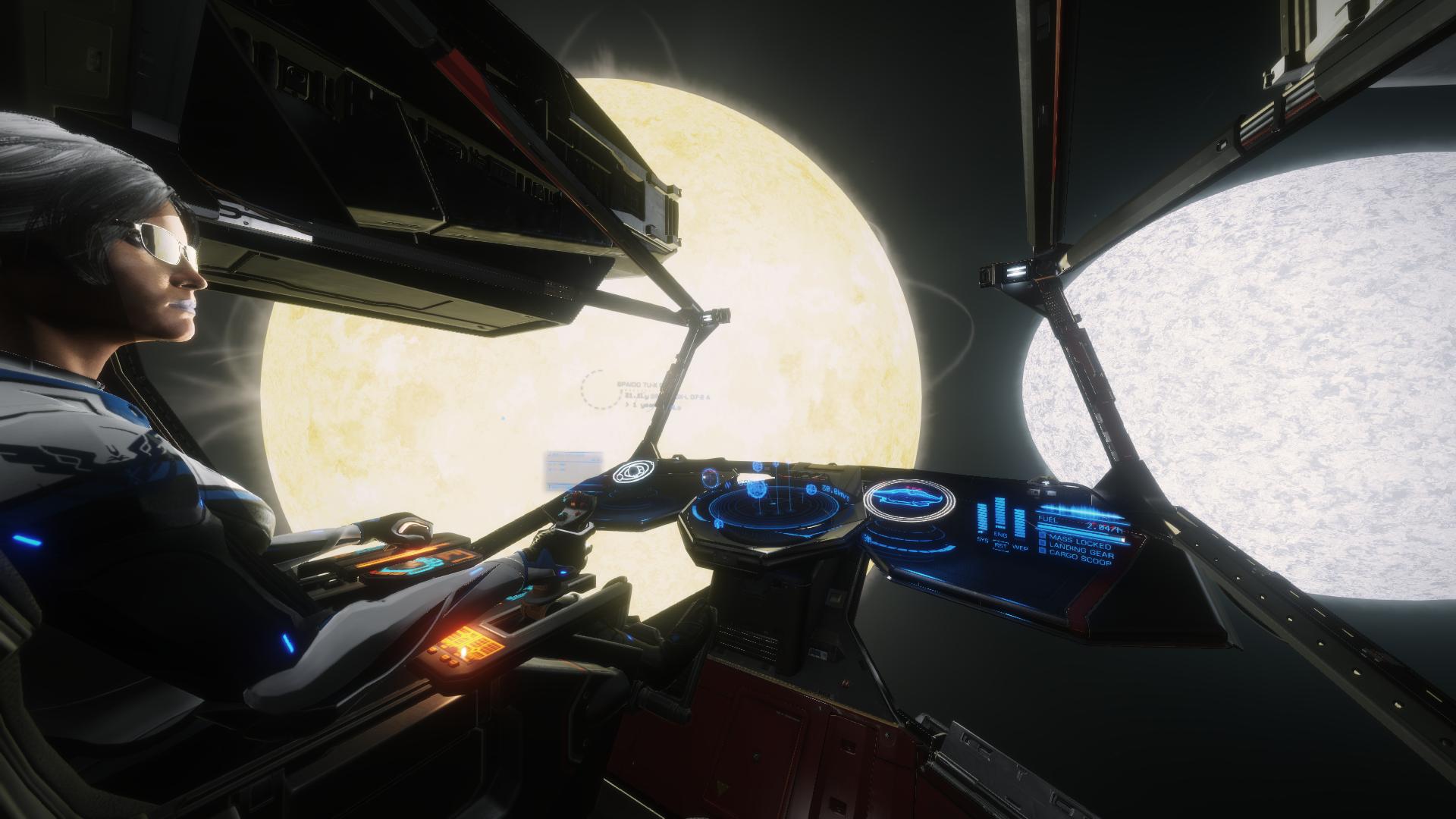