I walked out of the storage hangar, leaving my Anaconda behind me all wrapped in the synthetic storage coating, feeling like a weight had been lifted. I had just seen a text from the stevedores saying that all the supplies that I would need for my trip had been loaded into Col Livingstone and it was ready to go.

I looked at the new wings on my flight suit, indicating my promotion to Dangerous, and smiled. It had been a long road to get these and I was proud of the achievement. Now on to getting out, away from humanity for a little while.

I strapped into the seat in my Asp X and powered it up. Gently I lifted off the pad and eased the throttles forward, exiting the starport. I couldn't resist boosting out of the mail slot, annoying the already angry flight controller and scaring the daylights out of a Sidewinder pilot coming the other way.

First stop - Jackson's Lighthouse, the neutron star slap bang in the middle of the bubble. Arriving in the system I angled toward the plumes of the star, boosted the FSD and aimed at the first system on my destination. I had elected to go straight up and with a boosted FSD I was about to blast 256 LY straight up, out the bubble and into the void.

Nothing prepares you for hurtling your body 256 LY in one go in seconds. Even with the cushioning that is built into every FSD the vast distance just does something to your brain that means it takes a little while to catch up. I zeroed the throttles and sat there looking at Praea Euq UJ-Z d28 A. The bubbling ball of white plasma boiled in front of me throwing plumes out into the void. Once my brain was back in place I honked the system, slipped forward to start scooping fuel, and had a look at what was there.

Turns out I was not the first commander to be here. That's OK. It's becoming harder and harder to find systems that nobody has been to especially this close to the bubble and I have my name on a lot of systems already.

From there I opened the galaxy map and aimed at Thor's Eye. Speaking to nobody in particular I said, "Make it so."

I hit the FSD and did just that.
Do you like it?
3
Shiny! 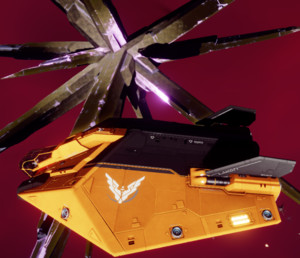