I sell my medical cargo to every station in Sol, and a couple of other systems. Just as I get most of the way back to my home system when my comms panel lights up with a message from an engineer that I had inquired about a few days ago. He has invited me to come visit him at his base to see how we can work together, although he has a rather high "donation" he wants to start working with me.

I stop off and pick up the needed 200 tons of gold to donate to him and head off to his system. We meet and I donate the gold to his services and he starts upgrading my systems. As we go along and keep making changes, he tells me about a friend of his, Ram Tah, but this man is famous all though out human space so I know of whom he speaks.

I finish my work with him and I set off to finally get back home. It doesn't take me long and I am passing through the air lock of Ray Gateway and finding my way to my landing pad. It's late but not too late. I arrange for routine maintenance on "Deep Core" and have her put in storage as I switch over to the hangar where "Syren" is stored. I have a few upgraded parts from Lei to install on my combat equipped python.

Wanting to see how she handles after her upgrades, I take her out and head to war-zone in my own system being fought by two of the local factions.

I side with the Federation aligned faction and go to work. a Viper Mk IV is my first target, he can out turn me but he can't keep me from getting a lock on him, it takes a few hits from my plasma accelerators to put his shields down and then a little work from the three multi cannons, but the Viper goes down without so much as scratching my paint.

Then I lock on to another python that's going at it with one of our Federal Corvettes. I get in on him and bring his shields down much faster that I thought I would, it takes me a few to work through his hull and put him down, but she's done it, and without so much as taking the shields down past 50%.

I give it a minute to get my shields back to full strength, I jump back into the fray and engage an anaconda, I wasn't planning on taking on the bigger ships in this first war-zone fight for Syren, but here we are locked onto the big ship and I am doing a decent job of keeping her nose off of me as much as possible, while delivering strikes from the plasma and multi cannons, she gets her nose on a me a few times, but she can't bring my shields down and I get hers down and start working on taking out that big hull.

I keep the thrusters engaged almost the entire fight, but I keep pounding that anaconda until she finally succumbs to her wounds and explodes, right after she did the other side called it quits and jumped out of the fight.

I stow my weapons and super cruise back to Ray Gateway, I put Syren in her hangar and have her rearmed and cleaned up while I head up to Jeans place to pick up my cat and see Jean for a little bit, I am really tired but I want to see them both.

I get to Jean's place and she understands from our conversations the past few days that I am worn out, so she has a nice Irish Whiskey ready for me when I arrive. I have never been inside her place before, but since it's the same floor-plan as mine, it looks very familiar. I pick up Bella for a a quick pet of the head and let her go back to relaxing on the couch.

Jean comes up and gives me a long slow kiss that lets me know she missed me and wants me to know that. We sit down on the love seat and talk about the past few days. I fill her in on my adventures with trading and working with several new engineers. she tells me about a few ships she's just passed on to their new owners and that she is done with school for the summer session. She has one more semester and she will be finished with her masters degree. Once she has that degree, she will try to work for Faulcon DeLacy in space systems engineering.

We sit talking and sipping whiskey for another 30 minutes, but it's getting late and I am really needing some rest. I give Jean a nice goodbye kiss a take Bella and head home. I think I'll stay at the station on Tuesday and just get stuff done around the apartment and arrange some ship care for my growing fleet. I need to recover from the furious pace I have been keeping up.
Do you like it?
2
Shiny! 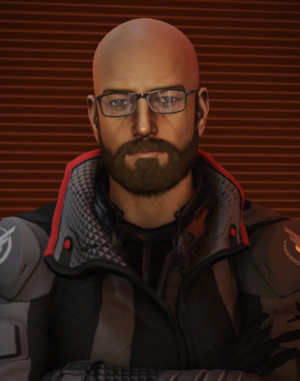