CMDR Yumasai's Captain's Log #13: The Battle of No Cha

Ladies and gentlemen of the cosmos,

This week I have been involved in one of the most intensive battles I have ever participated in during my career thus far at the point of writing this entry. It all revolves around the No Cha system, a system known for it's riches in resources. It attracts many miners, pirates but so too the attention of the Imperium. As such, our Imperator, Hadrian Augustus Duval, had plans set to secure the system. This went well, as within a matter of weeks the No Cha Party's influence within the system was reduced to the point where elections were unavoidable. Naturally, the Imperium managed to convince the populace of the No Cha system that the best path for the Empire is one of autarky; One where we do the best we can ourselves, rather than to weaken ourselves with reliance on external powers, such as the Federation or Alliance. Thus, No Cha swiftly elected Imperator Hadrian Duval to reign over the system, after which the Imperator quickly dispatched the Nova Navy to indeed secure the system and enforce his law, with many bounty vouchers being delivered in the subsequent periods of time.

But this was not to last; Nova Imperium had managed to seize the No Cha system, and as this is a profitable system, the Imperium's nemesis, the Peraesii Empire Consulate (PEC), had decided to thwart the efforts of the Imperator. And the PEC was in luck: A recent expansion from a Temurtian Cartel, The Temurt Drug Empire, had succeeded into making the Temurts settle within the No Cha system. What better opportunity for the PEC to thwart Nova Imperium than to help a drugs cartel with compromising the authority of the Imperator.

At first, PECs efforts were covert and not detectable, albeit the Imperium did noticed that the Temurt Drug Empire kept growing in influence. This was done away as simple criminals trying to challenge the Nova Navy. But to our surprise, they actually intended to challenge the Nova Navy. And not just for a station, no... They challenged the Nova Navy for system control and control over it's administrative station. A challenge which the Nova Navy had no choice but to accept, as denial would mean the loss of one of the Imperator's most profitable systems, and this naturally cannot be explained back at the HQ in Dyson City (Paresa).

At the beginning of the conflict, the Temurt Drug Empire managed to surprise an escort fleet with quick and ferocious fighters. This loss for the Nova Navy was unacceptable for it's Admirals, and they knew they had to scale up efforts to something more than a simple escort fleet. And so, the first of many Nova warships entered the system. And they had only one goal: To take revenge, and crush the Cartel's operatives. And so they did. The second day of the battle was a victory for the Nova Navy. Naval Headquarters back at Dyson City were very happy with the results, and thought the conflict would soon be over and dealt with, crushing the Cartel in a matter of days.

They could not be more wrong however, as the next day, rather strange vessels were spotted. They were not displaying the insignia of the Temurt Drug Empire. Instead, these vessels displayed PEC emblems. The Nova Navy present could not be reinforced in time against this sudden assistance by the PEC to the Cartel. However, it now was clear to the Imperator and his Fleet Admiral why the Cartel managed to thwart the influence of the Imperium to begin with: PEC was using the conflict as a proxy war. But nothing was indirect anymore by now, as PEC clearly became involved by showing it's presence to the Nova Navy as they fought with the Cartel.

The Fleet Admiral, somewhat rather playfull with the naval asset pieces, decided to ramp up efforts even further. The ordeal was serious now: This battle was not to be over in a few days, but could take a whole week instead. This only became moreso a reality when after the 4th day, with the score being 2-2, it was discovered that the Cartel had aid from not one, but two external parties. This second party however, was far worse than the PEC: It was Arissa Lavigny Duval, the Emperor, since she wants the Nova Imperium erased from the galaxy.

The involvement of Lavigny became ever a more pressing matter to the Fleet Admiral and the board of Admirals alike; The Fleet Admiral in the end opted to deploy every single asset of the Nova Navy to the No Cha system, in hopes of sealing the conflict in favor of Imperator Hadrian Augustus Duval. This move worked, as after 6 days of ferocious fighting and interdictions, the score once more was a draw: 3-3. Now it was showtime for both sides: Everything had to be given, or else all what they fought for would be lost. PEC deployed additional Commanders, and so did the Nova Navy. Lavigny did not alter her deployed Commanders. 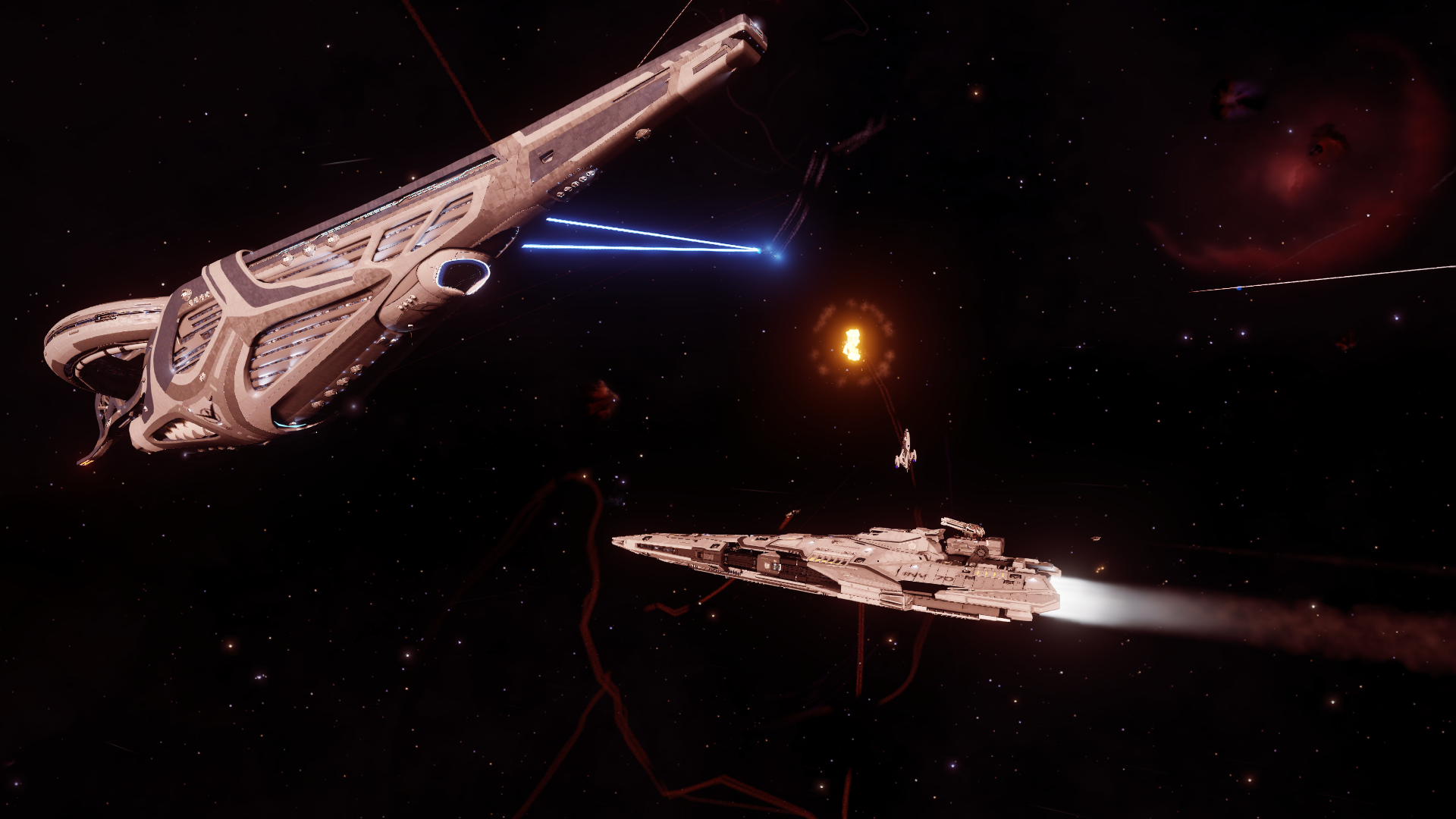 A Majestic-Class and NNV Hadriani Vastator, warships of the Nova Navy, seen in action during the Battle of No Cha

In the end, the Temurt Drug Empire had lost the Battle of No Cha with a score of 4-3 for Nova Imperium. More importantly, both PEC and Lavigny's assets were sent back with their tails down: They had not expected for Hadrian's navy to be able to push back the combined deployments of all 3 powers together. And yet, they did.

Let this be a showcase of true service, loyalty and discipline on the part of Nova Imperium's Commanders. The Nova Navy may not be as big as others, but in lack of it's numbers, it has the material quality to make up for it.