I wake up this morning feeling both excitement and sadness at the same time. Excited because I start my journey to joining the Imperial Navy and sad because I won't winging up with my best friend anymore. I can't sit here and dwell on that any longer. Time to pack up and prepare. Lilli joins in helping me load my ship up. After all is loaded we pose for a picture together in front of our room at Medupe City. It may be a while before we see each other in person again. I hope not too long. The only thing keeping me together is that we still fly for the Empire, so our paths will cross again soon. Hugs goodbye, tears falling, we take one last look before I depart.

Pre-flight checklist complete and away I go. Route plotted for EOTIENSES. "Frame shift drive initiated". I honk 15 new systems on the way to my new home. Got to get some extra cash somehow lol. I was greeted at Parkinson Dock by 3 new recruits for the Imperial Navy. They also had their applications accepted. They served under Emperor Duval. We are shown our room. Apparently the apartments here are bigger then Medupe, so all 4 of us are housed together. We are told that we are to report to Captain Danvers in 2 days time. This allows us to familiarize ourselves with the new station and surrounding ports. That's great because I love sightseeing. As I unpack my belongings, I notice a box with a pink bow on it. Attached is a letter from Lilli. It reads....


Firmando per ora,
Comandante Valkyrie
Do you like it?
3
Shiny! 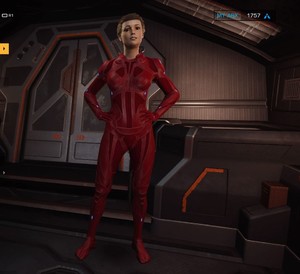