As we head off for the shipyards and tech stations to find the gear we need, I’m given a run down on Thargoid scouts. Raven pilots the Krait as if it her own while she talks on. “OK, there are scouts, and there are Interceptors. The scouts are a doddle to deal with for any experienced pilot, though you may want to exercise caution around large groups of them. The Interceptors are a whole different ball game. For those, you’ll be needing a different loadout - we’ll deal with them some other time.”

The Krait 2 is ideal for hunting scouts, nice manoeuvrability, speed and weapon hard points. Already engineered and kitted out for previous brawls with pirates some time back, the `Solstice`, needs minimal reconfiguration for fighting Thargoid scouts. Aside from a new turreted AX cannon and some hull re-enforcements it remains largely unchanged. The Xeno scanner and de-contamination limpets are handy, but not essential, so I shelve these units for now and take on additional hull re-enforcements and a shield booster in their place.

We then head out to Merope to search for scouts, but before dropping into combat, Raven takes us to a distress call. Inside the rings of one of the planets we find numerous Empire ships, including two large Majestic Class Interdictors. There are no Thargoids, but the wrecks are all badly damaged from a recent encounter – few survivors remain. A reminder of what Thargoids are capable of and a taste of their brutal nature. We salvage what we can and return to Reed’s Rest. Last stop before battle commences. 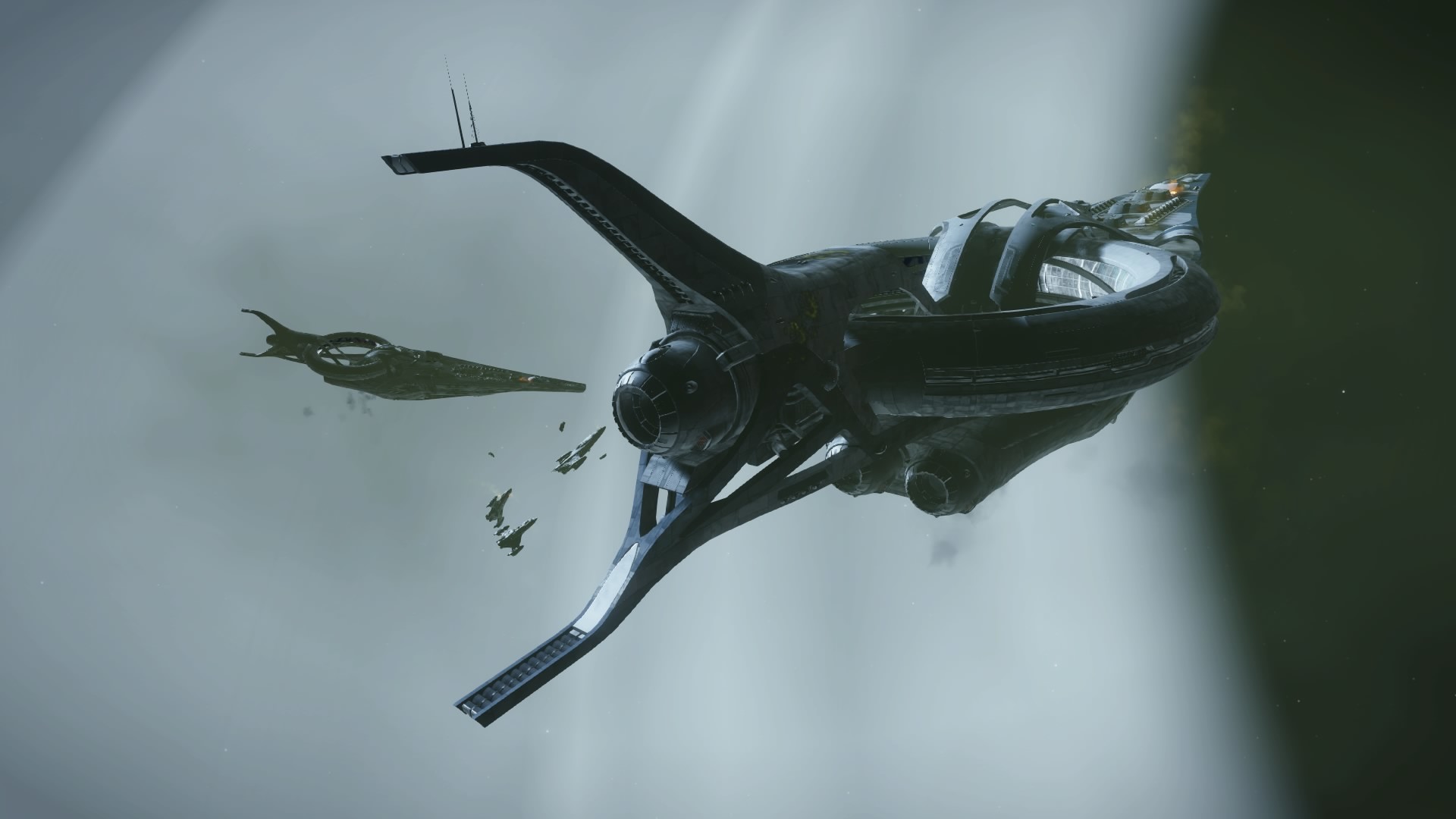 Close to Maia, the surrounding systems are full of Thargoids, with on going battles occurring all the time. There are plenty of data feeds available to view recent activity, who’s fighting where and the current Thargoid activity levels.

We drop out of supercruise into the signal source area. Almost immediately, we are attacked by four scouts, with no warnings. Their weapons are fairly weak, but can inflict damage directly to the hull and some can occasionally fire caustic damaging missiles. “Sometimes the scouts are already about, other times you have to wait a few moments for them to appear.” Raven explains. With relative ease, she systematically targets each one of the scouts and dispatches them within a minute, a couple of passes and they’re gone in a big puff of green slime. 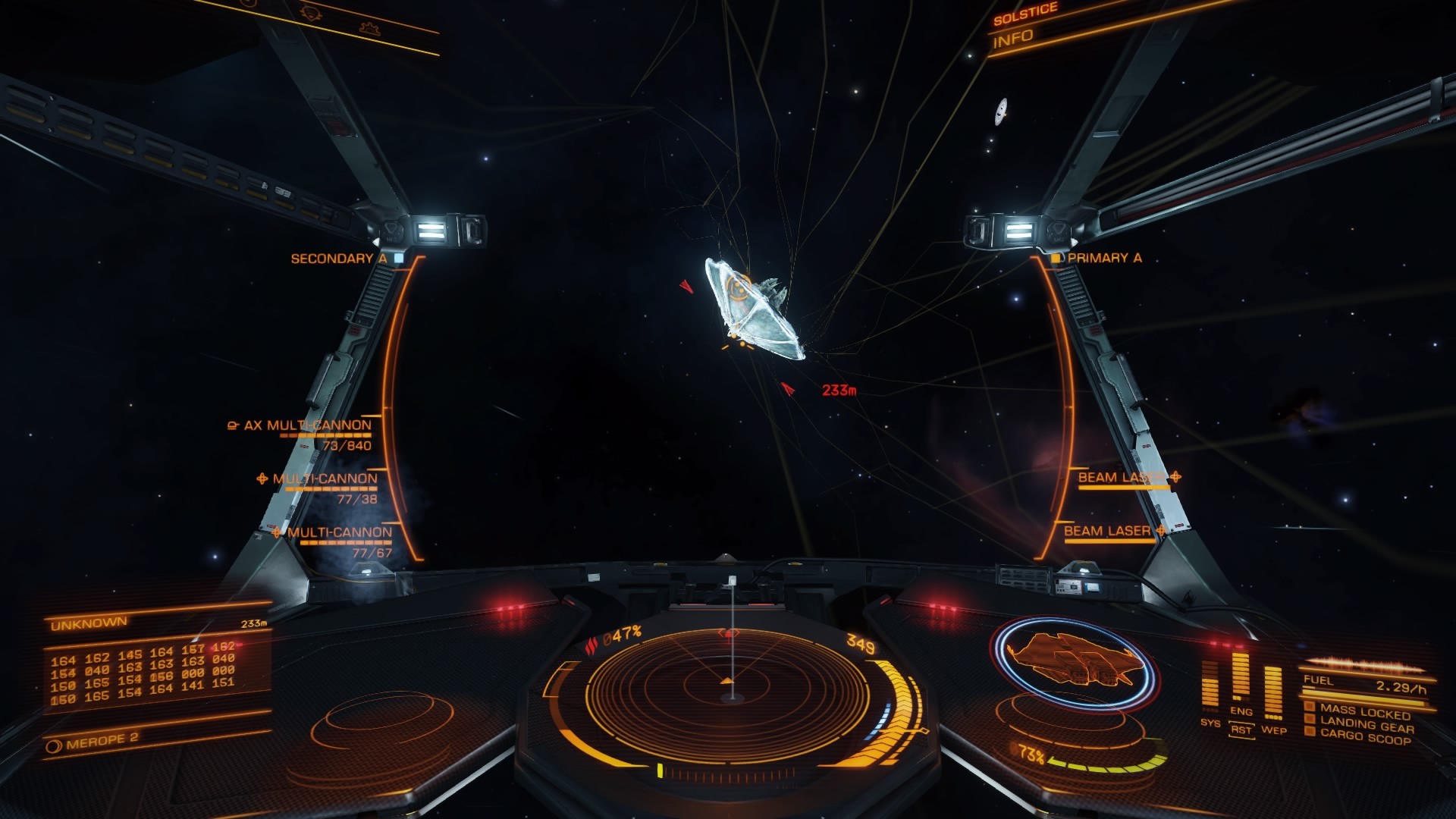 There are four different types of scout, the basic Marauder, the Berserker, the Inciter and the Regenerator. I’ve read somewhere to fight them in a specific order, but the action is so frantic that we end up just going for the nearest one. “The Xeno scanner is useful for identifying the scout type and its health, but you can still target them without the scanner and get an idea of when they’re about to explode by that wailing noise they give off just beforehand. Just be careful not to fly through that green slime when they explode. Like the missiles they sometimes fire, that stuff is caustic.”

We fly too close to the cloud given off by the last scout as it explodes and the ship becomes contaminated. Decontamination limpets would be handy, cleaning the affected areas after battle, but the unit takes up space and the limpets need cargo space too. Raven opts to use the silent running method to quickly heat up the ship to past 200%, firing the beam lasers to accelerate the process. Then its back onto normal running and diverting power to systems while we wait for the heat to come back down below 100%. “Initiating supercruise. Now over to you Captain Jonno” as she hands me the controls. Of my own ship. Which is actually mine (and not hers).

I take the next encounter and we destroy another four scouts with relative ease, then seven more in a much more frantic encounter - enraged scouts hammering us and cracking the canopy. "Oh, that can happen quite a lot." says Raven, looking briefly up at the damaged canopy with no real concern. "Make sure you have a half decent life support system on board."

I see now why she is short of cash, since the damage and ammo costs are almost more than we've made in credits from destrying the scouts. Its not a profitable activity at only 10,000 credits a kill.
Do you like it?
15
Shiny!