Painite In The Ass

This is CMDR Smiley with an update from my most recent trip for any future pilots that happened upon my logbook after my passing.

I took a trip down to Daha Deti. I had heard about some people looking for a lot of painite, one of the more expensive minerals in the galaxy for those of you who don't know. I think the galactic average is somewhere around 150,000 credits. So I figured I could capitalize on this opportunity. I had Baby Blue sitting around at Scithers Hub (In the G 141-21 System), Baby is my Type-9 Heavy. Had just recently bought her after spending years trading in my ole Type-7. Anyway, it took about 8 jumps or so to get there. Almost got interdicted a couple of times. Luckily, I'm pretty competent when it comes to evading pirates. I get off on tangents real easy. After those 8 jumps, I had arrived in Daha Deti at the Carleson Ring station. Parked my ship at one of the bays and made my way to the local bar where alot of pilots stop off while there ships are beginning worked and whatnot. I took a seat and got to listening. Overheard the conversation between some big wig and an amateur pilot about the deal. The pilot turned the guy down. I got up and took a seat across from him. We got to talking and came to a deal. He represented the station market and the going price at the station for painite was almost 800,000 credits! I was thrilled. To think, a little known pilot with a big ass ship was about to strike it rich. I outfitted my ship with the proper mining equipment and started searching for painite hotspots in rings. The hotspot I found? About 22 jumps away in the Hyades Sector DB-X D1-112 system. But it was worth it. I had 240 limpets on me and 400 cargo slots ready to be filled. And I got to mining. After 3 solid days of nonstop mining (OOC about 5 hours), I came away with just under 500 tonnes of painite. Gonna be a nice cozy payday. I made my way back to Daha Deti with my load. Almost ran out of fuel on the way back though. That was scary. But after arriving, I went and the Station Market broke and told him the contract was filled. The guy only wanted like 150 tonnes but I went above and beyond. He transferred ~400,000,000 credits into my account and the station workers began unloading Baby Blue of her cargo. All in all, a good trip that was definitely worth the hassle. This is CMDR Smiley (My IRL Nickname) signing off, see you all in the next one. 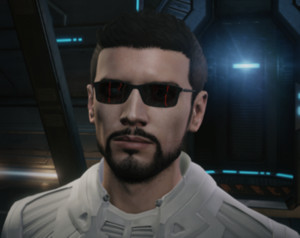