I’ve been working undercover recently, so I have not been able to report on exactly what I have been up to.  Its proper top secret stuff...

Those chaps over at Asterope and neighbouring systems seem to have the upper hand against those Thargoids for now (more stable now anyway), so I and a few others have taken leave of the battle for a while. Besides, I had some more pressing concerns to deal with elsewhere. I’m back working with the Federation, they have given me an opportunity to climb their ranks, provided I play ball with them and get them what they need. This will get me access to that Corvette soon enough. There are some fringe settlements out on the edge of the bubble where there is a lot of political instability and the work is of the data acquisition kind, infiltrating surface bases and hacking into their terminals. Something big is going down with the minor factions, the Peoples Front of Judea…or whatever they call themselves. Lots of spying on each other for economical and poll data.

The pay is ok and there are a few good engineering components to be had, but what I’m really there for is the kudos it gives me with the Feds. There are also a few more courier missions to run, not as thrilling or as well paid as the espionage, but nevertheless useful in upgrading my status within the Federation. Anyway, back to those data acquisition missions..

Phase 1 - Getting the missions. There are numerous data gathering missions available in the nearby systems, but often, many of them point to one particular settlement. I stack about 10 of them up, all for the same two or three terminals in the same system.

Phase 2 – This requires swapping over to a fast ship with good shields. Docked nearby, my Clipper makes a good choice, but it needs a large landing pad, so I have to swap back and fourth with the DBX when taking or handing the missions in at the smaller outposts. I wish I had my Krait nearby with its medium sized bulk rather than large – but no matter.

Phase 3 – Approach the site and drop from orbit down to within 4-5km. Loitering from this distance a few hundred metres off the ground, I can see the base and the support ships guarding it. Pips to engines, activate data link ready to scan (remembering to put it into a fire group and switch to analysis mode). Then it’s a bee line straight for the terminal at relatively low altitude and decent speed. Not too fast though, you don’t want to tangle with the base or overshoot. As you get within 1.8km or so, the terminal itself becomes targetable. 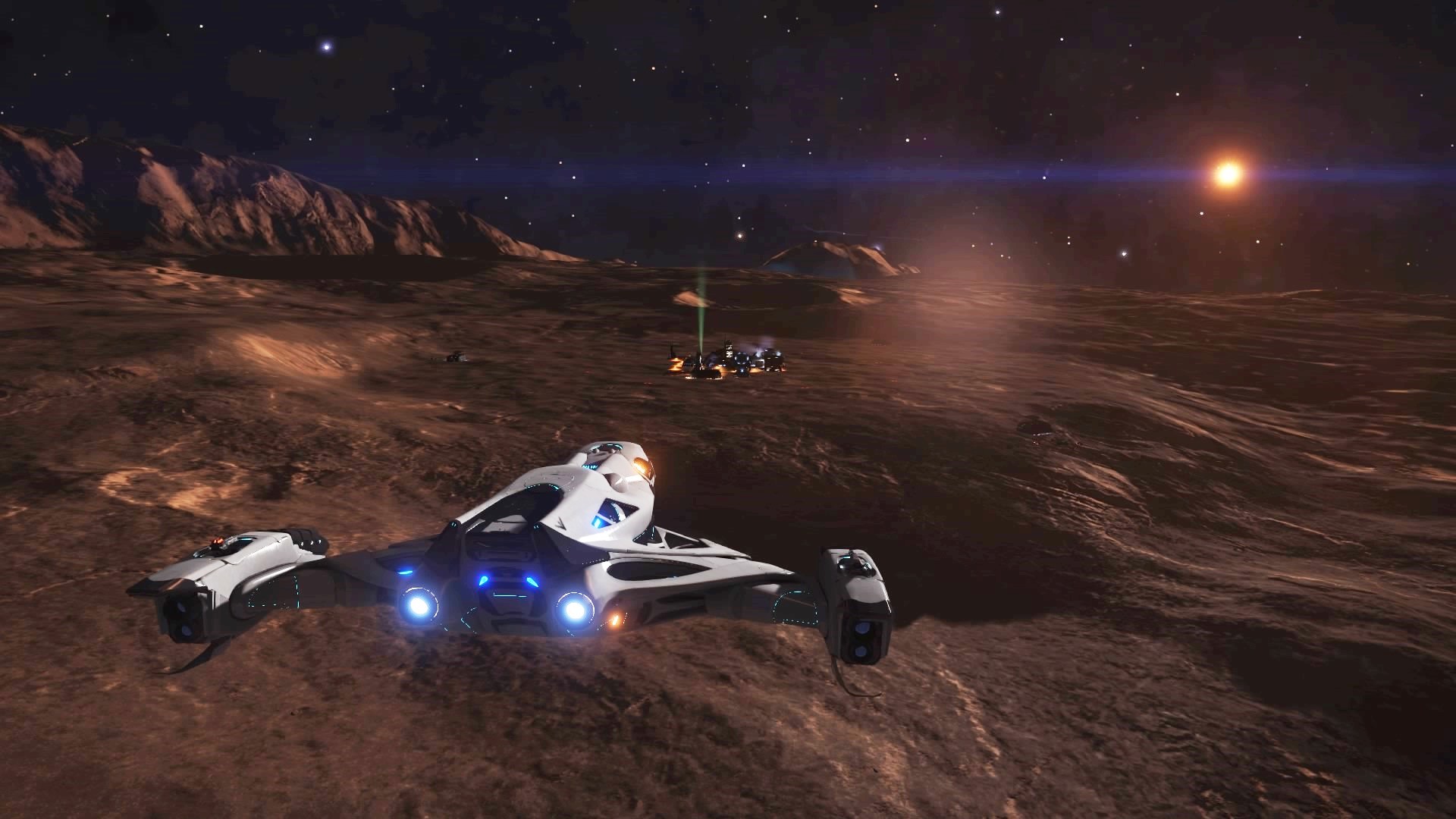 Phase 4 –Fly in very close to the terminal before beginning the data transfer, almost sitting right on top of it. Despite a few warnings of bounties over trespassing, try not to panic at this point. They wont shoot too much…not just yet. Begin the download, but prepare to scramble. 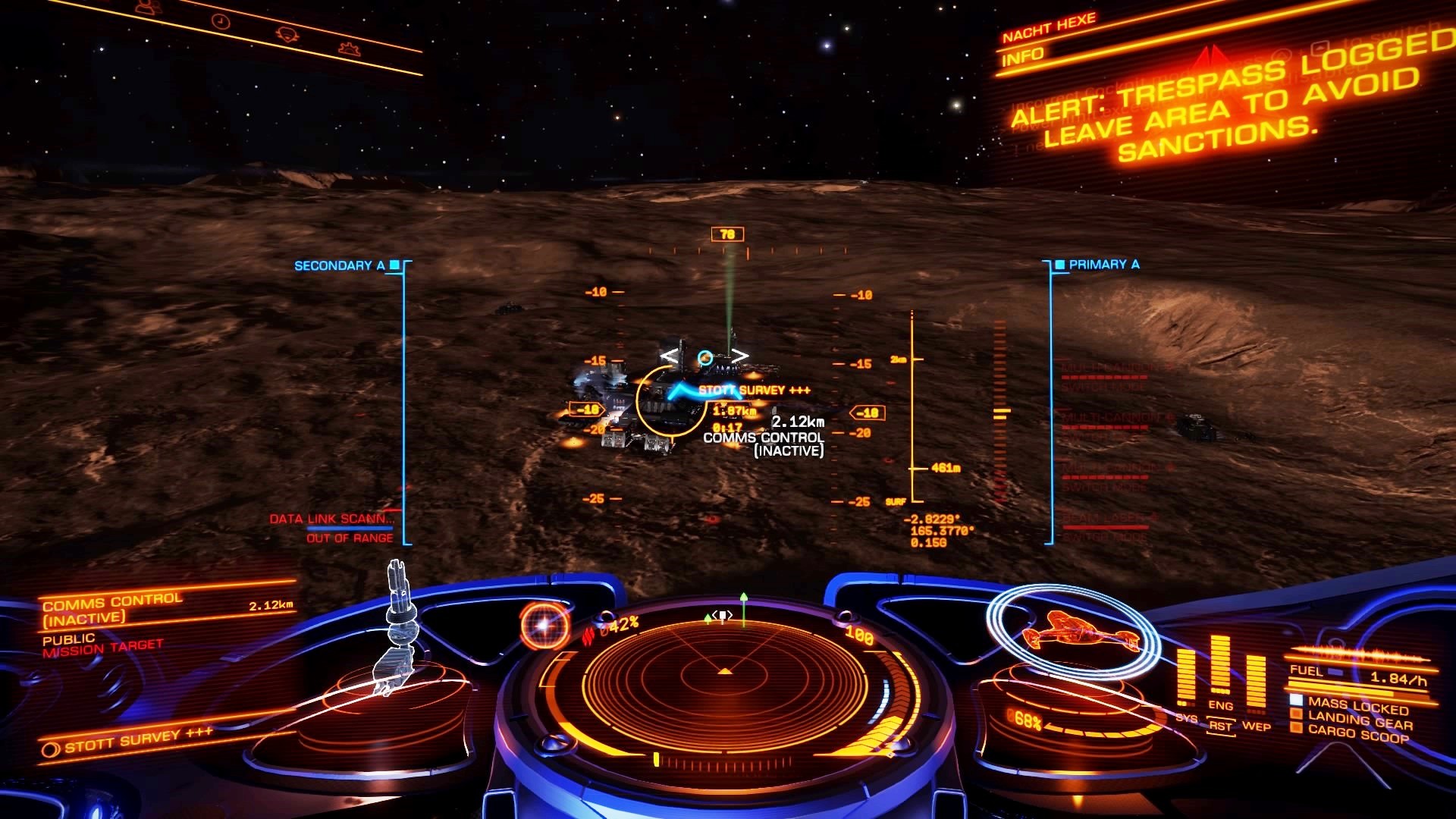 Phase 5 – Run, run run for your life! As soon as that data transfer is complete, the alarms will trigger and every laser that can shoot at you will shoot at you. If you’re quick enough though, a fast ship (over 400m/s) with heavy shields (6A engineered or in my case, 7A somewhat engineering with shield boosters) will give you just enough time to weather the storm. Point up, boost, boost again, retract the scanner and initiate super cruise ASAP. 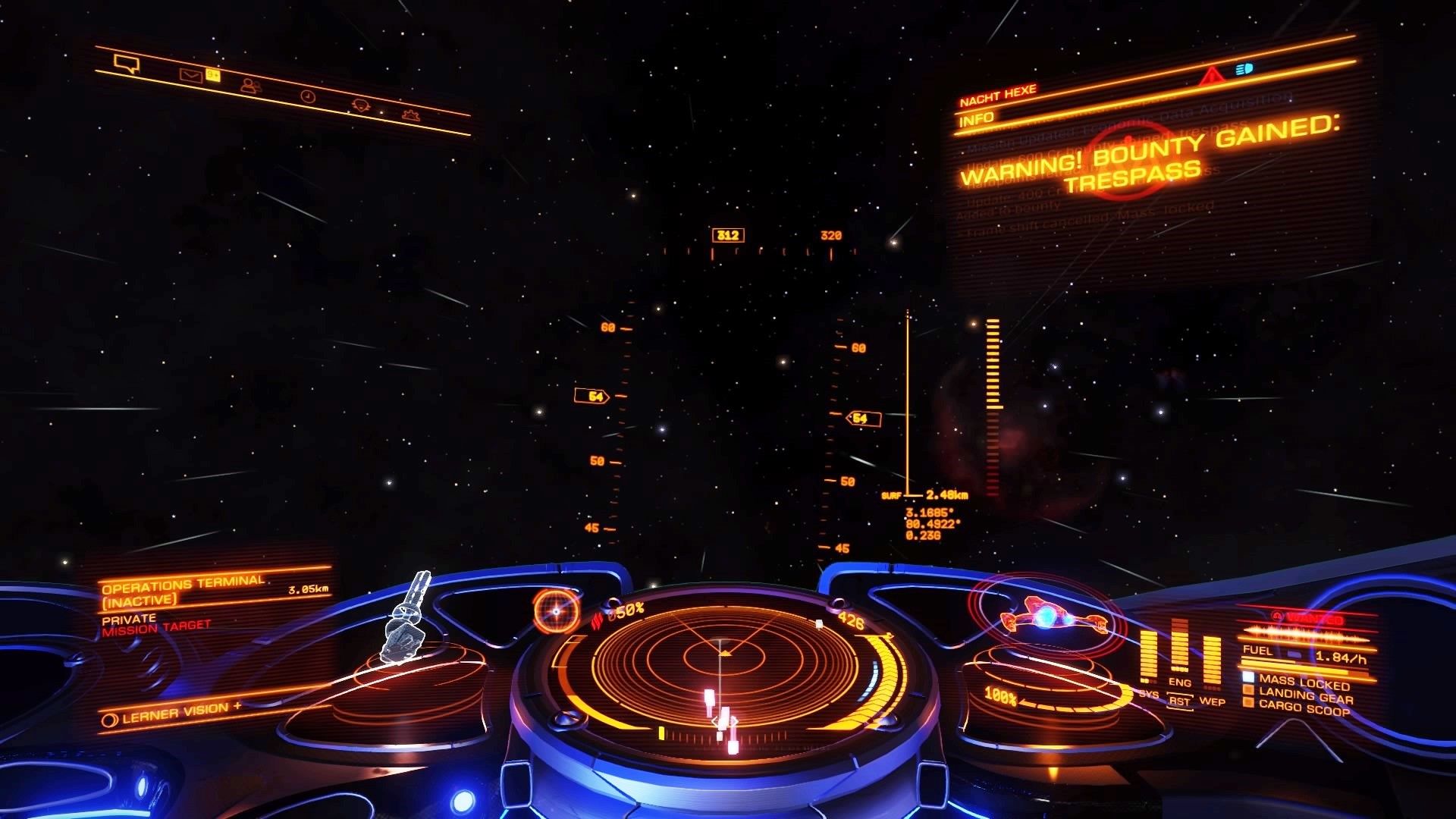 Phase 6 – Interestingly, you can cruise around close to the base for only a short time, recharging those shields before returning back to the same terminal, to continue further data transfers. So repeat the process until you have all the data acquisitions done. Then hand them in for a nice reward!
Do you like it?
2
Shiny!