ADVENTURES OF BRUCE COLDRUM, EXPLORER OF THE GREAT VOID 0011

So I ran a simulation yesterday, to see if the Daedalus could take the stress incurred by flying into the arms of LHS-235. Turns out, LHS-235 is technically a neutron star, but a white dwarf, and I soon learned why this is relevant. Within seconds I had to witness my virtual ship being sucked into the star with catastrophic system failures along her entire operation and no way of saving her. The simulation guy charged me an arm and a leg for that little warning, said something about saving my life before I made an actual mistake. These simulation guys, when it comes to running a business they're like insurance suits, I swear.

Of course, me being me, I had to go out and try approaching the actual star anyway, so I flew into LHS 235 knowing what a risk I was taking, and I got away a tad singed but seemingly in one piece. Nothing beneficial to the FSD drive though, and a few hours later it was made apparent that the Daedalus had suffered some pretty significant damage to her systems thanks to that little stunt, as I started to experience some serious malfunctions. Hadn't looked at the damage report, should have done that, nearly cost me my life. Lesson learned. I got to use the Automatic Repair Unit, at least.

I've set a course for an unknown star, and I have finally figured out the FSS system, which is really handy when you approach a system with 44 orbital bodies in it. Downside is that if you want to surface scan something to map it, you need to still fly up to it, but it is now easier to pick and choose. Which is nice.

My aim for this trip is to shortly leave the Inner Orion sector, and return via the HIP 49355 system I had aimed to visit earlier, mapping everything in between, of course. This may take a me a few weeks, but seeing the sights will be worth it, as will the reward for the starmaps I will bring in..
Do you like it?
3
Shiny! 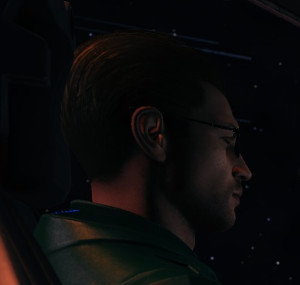