3rd anniversary of Colonia – how it was three years ago

The way to Colonia

Spaceship Anaconda is one of the hugest. But the enormous hull was quickly and nervously changing course with loud creaking - as a tiny sloop, caught by hurricane on the ancient Earth. Al tightly griped the spaceship controls, trying to move his ship away from blue whirlwind, rotating in front of him behind cabin glass. The jet from this neutron star was really large and very dangerous, however, busy Al managed to catch an ironic thought between cautious, but quick and exactly measured movements. “Something like entering the hurricane by myself to sail faster. Old skipper’s cry: “You, MADMAN!!!” is audible through centuries”... But the jump drive, overcharged by neutrons, may throw Al’s ship four times farther -128 light years fully loaded and nearly 200, when empty. “Now! - add more rotation and quick turn right!” Space, full of stars, appeared ahead. Al took a deep breath and exited hyperspace after minute of very quick flying away from the jet. “The ship needs repairing, and I should relax too…” Self-maintenance systems were launched and Al, as many times before in such situations, reminded the beginning of ancient Russian song. The song was nearly two millenniums old, slow and grimly challenging. Exact translating of poetry is nearly impossible, but Al thought, that his translation precisely describes not the original text, but the state of mind:

Al found himself singing aloud. Not loudly, of course – deep space is really silent. The situation is not so dark, as previously - in case of crash he will be alive in escape capsule. Insurance will nearly cover the ship cost. And he have enough money to purchase five new Anaconda ships without insurance. But loosing the cargo, unique cargo, collected by members of his faction… Al turned aside to maintenance monitor and thought about previous month, which really was the busiest in his life.

Mankind, living in starsystems not far from the old Sol, decided to create another inhabited area. And this area is really far away – more, than 20 thousands light years. Men were whispering, that it’s the part of secret preparations in case of alien aggression. Al had no time to think deeply about this – the faction, he joined before, decided to participate a new community goal. Not easy indeed - delivering goods to the center of future human area. Colonia star system, 22000 light years from Sol, near edge of the Galaxy disc. Inside nebula, difficult to find… maybe, something is real in the whispers? Ten factions in top of monthly Colonia delivery will receive own stations in the new world. Transporting goods with such distances is really long, but the company, generally Russian, was ready. By the way, ancestors are glad, if watching us from somewhere – many factions are created by men of one nationality from the old Earth. Ancient nations are still existing and several factions are named accordingly – Spanish Caballeros de Sion, operating nearby, is a good sample. However, old Russians should be not only glad, but proud, if know, that Yury Grom is one of the largest Galaxy powers now. Al’s faction is not the latest indeed, but company management decided to select the most skilled pilots, used to long flights.

Difficulties began during loading goods. To avoid possible fraud, all new world cargo was delivered to one station, marked by special signs and provided, according to strict limits. “No more, than 10 tn for one empty ship in 10 minutes! And no reload operations inside – we already have the real hell here!” Swarm of small ships from all participating factions, flying inside-outside the station, reloading cargo in outer space, regular screams in intercoms… “Stop dropping, I need to collect containers from the previous ship!”, “Are you sleeping or drunk!? Fly to me, NOW!”, “Away! You are too close!” and cracking of force fields after the cry… Six ships are filling Anaconda in one hour, three – two hours, etc. And a long way after loading - around 700 jumps between stars with normal jump range…

Clock changed minutes in upper right corner of the screen. January 4th 3303 and nearly 24 hours before end of community goal. The seventh Colonia flight for Al and the latest ship, supplied by his faction. Loading cargo for Colonia during New Year holidays is much more slow, than usual. Men are celebrating, and pilots are too tired after three weeks of flying. Several commanders were sleeping during cargo transfer, sometimes not waking up after half an hour of loud intercom calls. Al was loaded in four hours yesterday, filling Anaconda by 1-2 ships is long indeed. Now only 1000 light years to go and Colonia nebula is already visible. Previous 6000 light years Al was using neutron stars. Commander turned to look at the star, he successfully left, on it’s jets, barely visible from this distance, and reminded…

Month ago Al thought, that neutron stars are too risky. He read many stories about crashes in jets. But jump range with multiplier four! After the fourth flight to Colonia and successful goods delivery he decided to try. “At least, I’ll not loose the cargo, collected by faction, if crashed on way back”. Al found a neutron router, plotted his way to Sol area, crossed fingers and left Colonia. Neutron route was passing through the areas, no chance to be visited by own free will. Often 2-3 stars only in normal jump range, many of them are impossible to use for scooping hydrogen fuel. And ship without fuel… you may easily continue yourself. In this dark vast hole, below and aside from Galaxy disc, the old song was reminded by Al. The black space raven of danger was flying over his head, getting close when Al enters neutron jet. Many jets were simple, several – not, it’s something unpredictable, like ancient art of sailing, using only wind. Modern art of using jets includes not only additional dimension for turning, but rotating the spaceship. It requires complex, cautious, but quick maneuvers at the same time – not easy indeed. But Al knew, that the raven is following, watching and waiting for his mistake. First time Al learned to fly 24000 light years in four-five hours. Without cargo, of course. Next he managed to use 7000 light years of neutron route with goods. After this Al was making a turnaround between Colonia and Sol area during two days only. The first day – loading and flying the maximum possible distance before dangerously sleepy state, the second – entering neutron stars, if not arrived before, quick reaching the destination, unloading cargo in Colonia and flying back. Jump range is smaller while loaded and neutron router was working OK only for last 1/3 of the way to Colonia. Ship is heavier and less controlled with cargo, the raven became much closer to Al’s head. But during more than 100000 light years the creature remained hungry...

Minutes before this black beast had a very good chance to be fed by shipwreck remains. Flapping wings were just over the head indeed. Several commanders managed to return in supercruise inside jet and escape after dropping out from hyperspace, but Al does not want to receive such practice. Broken cabin glass – and only 7 minutes of oxygen before escape capsule. Life support modules with more time are much heavier, and 30 minutes from the best one is not enough to rescue from this point with cargo. Normal flight with hologram on cabin glass is shorter, but without the glass, targeting by eyes only... Serious problems will have the same end, it’s better to take more cargo and move ship controls quickly and correctly to avoid. Al switched off repair module – the ship was OK. Next he looked on Galaxy map.

“OK, I have 24 hours and 1000 light years to go. It may be passed without jets less, than in one hour. But! This means, that you are slain by your own fear. You must steel yourself and continue the planned route. Do it now, if not - you’ll not be able to use jets, if highly needed. You MUST...” Al took another deep breath, concentrated and copied the next neutron star ID from router to navigation computer. “Let’s go...”

Twenty minutes later Al successfully arrived Jaques Station in Colonia and the raven flew away. “OK, delivery statistics for me... 2367 tn- not the best in company, but a bit worthy”. Several station crew members, unloading cargo, were drunk - not surprising. Robot Jaques, controlling the station, is constructing famous distillers, creating alcohol from nearly everything. “But from what this creature is making the distillers, when market is empty, as now? Maybe, from alcohol...” Al was very tired and slept in the hangar immediately after reporting to faction about unloading. 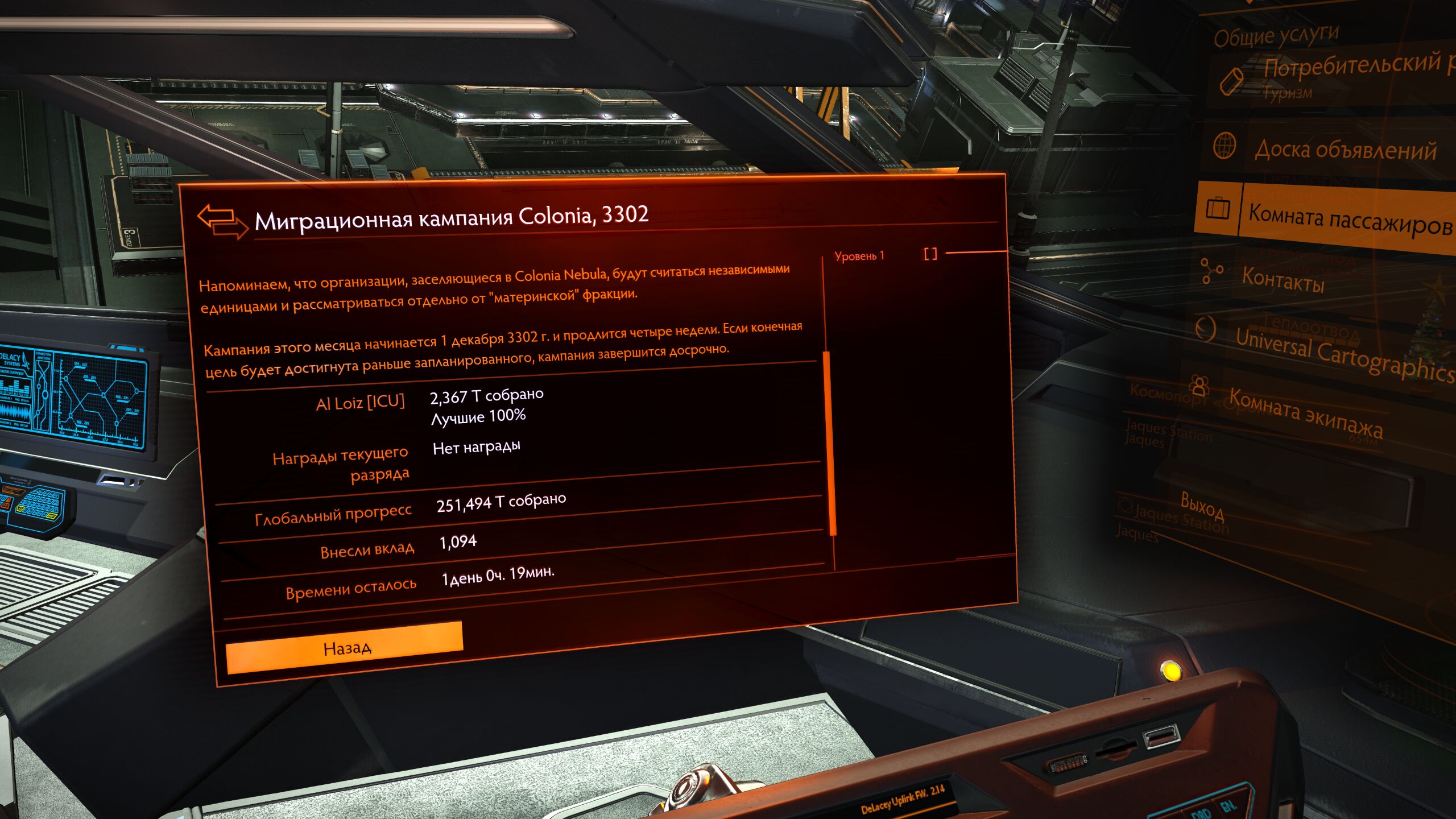 Two following days were extremely nervous. The faction’s common delivery is 19100 tn – will it be enough to pass? Of course, counting more, than 250000 tn of cargo cannot be done in minutes, but 24 hours! Maybe, they are using the distiller during counting!? Will the figures be exact? However, waiting finally ends. Place #5 – we have done it and the station will be ours!!! But another waiting began immediately – next month all the stations will be under construction.

During this month Al visited the Center of our Galaxy. Colonia is not so far from it, as the old Sol. Al reached the Center in three hours after departure, using jets. But his flight back was slow – scanning stars and planets, searching rare materials... Usual explorer’s business. Several commanders are doing this during years, nearly forgetting about the Sol, but Al knew, that he should be back in time.

February 10th 3303 Al landed on Tsiolkovskiy Horizon. The station was untouched - smell of new plastic, fresh colors... Mission board was not working – as usual, something should not work on the new station. Tsiolkovskiy Horizon – the name is not bad indeed. OK, no missions now, let’s take a look on Russian neighbors. The station name is… Dezhnev Landing - good too. Semen Dezhnev, the man, who discovered many lands in Siberia 17 centuries before and made two turnarounds between Moscow and Yakutsk. Al slowed his ship and reminded the community goal. How strange, that this goal, planned by Englishmen, was so Russian. Extremely long space delivery is something like old walking across Siberia – jump, and jump, and jump now, step and step and step before. Dezhnev Point there, Dezhnev Landing here – we really created Colonia and new Siberian frontier at the same place... Ancestors, however, were walking not only through headache, closing eyes and tiredness. They were making their steps through swamps, mud and snow, through frost, rain and wind. Often too far for receiving help in case of something bad. Having very simple medicines, not always with food, and followed by real ravens. But, first of all, they were making the steps over themselves, because each soul contains weaknesses and fears, man often must overstep. Travelers, doing these steps good, were reaching their destination, or successfully returning home, leaving ravens hungry. Our faction is not so large, as winners, but we were walking good enough to reach the new home. During this long way we were doing the things, never tried before, making the steps over ourselves and growing with these steps, leaving many fears behind. And succeeded... Let’s go home to Tsiolkovskiy Horizon.

After landing Al thought about future. “OK, I am home, but what will be tomorrow?” He, as many others before, doesn’t know this. Ahead will be expansions and wars, elections and retreats, problems and decisions, followed by another steps, done by men over themselves... The first Colonia Olympic games, won by a member of the faction… And 5 starsystems in control three years later

P.S. My first attempt of writing in English - sorry 4 possible mistakes
Do you like it?
5
Shiny!