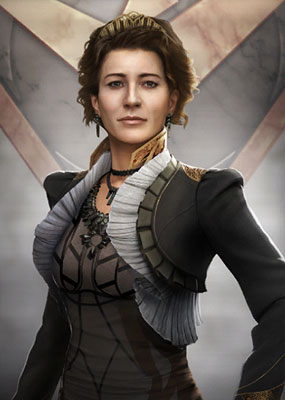 The Imperial Herald published her statement:

“For some time, I have regretted my initial dismissal of Hadrian. Had I known that Arissa intended to carry out such a brutal purge of his followers, my approach would have been different.”

“Although he has been labelled an enemy of the Empire, I found myself unable to ignore this new member of the Duval family, and so requested a meeting in the Paresa system.”

“Another reason to make contact was to verify his claim to be Emperor Hengist's grandson. All the genetic tests were conclusive – Hadrian is indeed my cousin by blood.”

“We have now opened a dialogue to see if there can ever be common ground between us. Perhaps together we can heal divisions within the Empire.”

Here are this week’s main stories.

Pharmaceutical giant Vandermeer Corporation has won the licence to distribute Vitadyne Labs’s nanomedical product. In a statement, Professor Katrien Rook said the organisation’s infrastructure and supply routes meant the nanomeds would soon be available to the galactic community.

Hadrian Augustus Duval has broadcast a message following the purge of isolationist group Nova Imperium, vowing to continue to pursue his claim on the Imperial throne. During the transmission, Duval claimed to have assumed the title of the recently executed Imperator Kaeso Modanticus, and accused Arissa Lavigny-Duval’s regime of brutality and terror.

In other news, actor Consuela Knight, who recently vanished from her private yacht along with its crew, has been located at a luxury retreat. When questioned, Ms Knight admitted that her disappearance was an elaborate hoax designed to enhance her ailing career. Many of Knight’s fans have disputed this account, but authorities have accepted the explanation.

And finally, billionaire investor Lexi October has announced plans to save technology company Supratech from bankruptcy by funding a commodity drive. October confessed an admiration for the company’s imagination and expertise, and said she hoped the enterprise would provide Supratech with the materials necessary to resume its innovative work.

And those are the main stories this week.

“Arissa Lavigny-Duval has revealed the true face of her regime – one based on brutality and terror. The callous execution of Imperator Mordanticus, in conjunction with thousands of Imperial citizens, shows her desperation to cling onto power at any cost.”

“Nova Imperium survives in the Paresa system, a single light in the darkness. We stand for an Empire that respects everyone, from slaves to senators. I truly hope that any who value honour and tradition will help keep our spark alive.”

“Our martyred leader will never be forgotten. In his honour, I have taken the title of Imperator Duval, until such time as the people choose me as their rightful emperor.”