This is Jav Marlo, on board the Deimos, landed at New Beaumont Dock, in Synuefai LX-R D5-28.

Today is my first anniversary as a commander of the Pilots Federation. It was exactly one year ago when I finally got my license back in Asellus Primus. So many things have happened since then. I have crossed the Galaxy to Beagle Point, made a fortune mining Painite and Low Temperature Diamonds, joined the Alliance Elite Diplomatic Corps and gained quite a reputation as a bounty hunter. I am rich now beyond my wildest dreams. I should be celebrating.  Instead of that, I am landed in one lonely outpost halfway to the Bubble from the California Nebula with an undesired and mysterious passenger on my ship.

My bounty hunting operation in the California Nebula was fruitful. For weeks I have been flying combat operations departing from the asteroid base of Darwin Research Facility in order to enforce the law in the very contested system of California Sector BV-Y c7. Like that, I raised my reputation with the local factions and, finally, General Scout Ramsey, from Turner Research Group, handled me a recommendation letter to Bill Turner. The big man himself has said that he will meet me at his facility in Alioth. It is my hope that he can give me a clue about my father’s disappearance, like professor Palin told me. 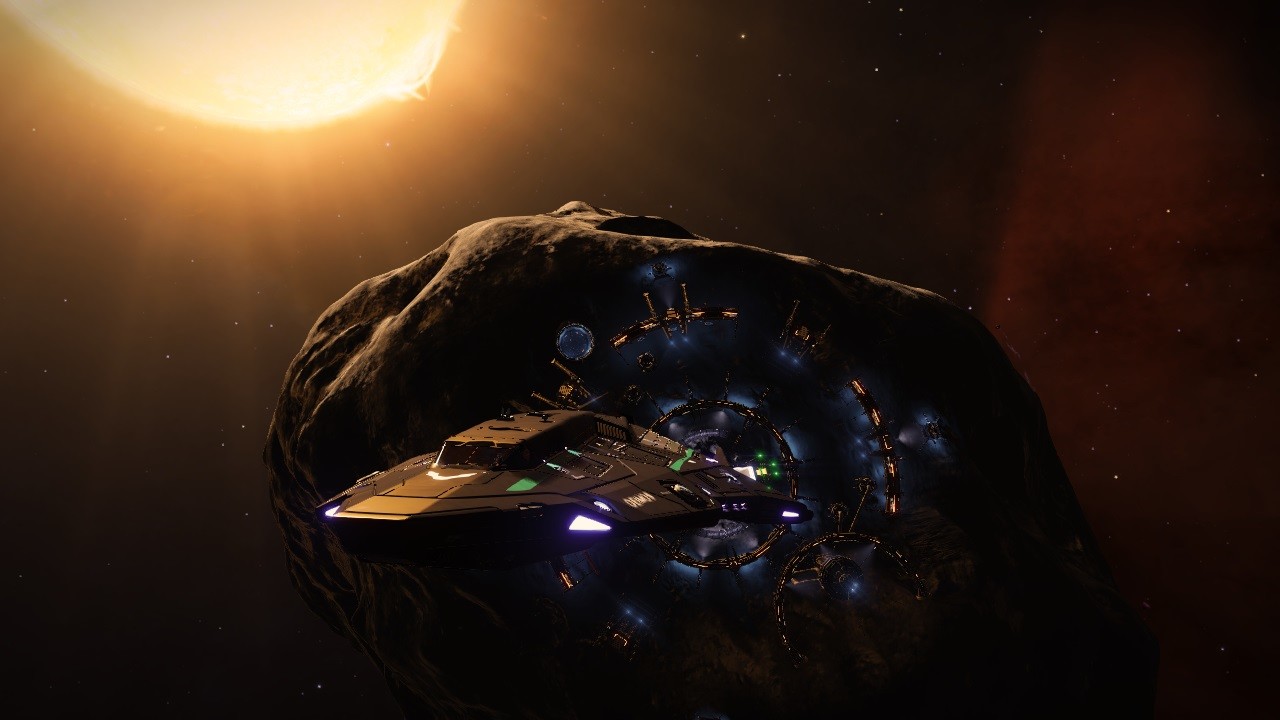 During my stay at the nebula, I have been working too for the Allied Order of Exemplars, a theocratic Alliance faction that have made of the California Nebula their home, where they provide security and stability for any travelers that make the pilgrimage to the nebula. I have passed some time among them in their asteroid base of Darwin Research Facility, and have studied their ways. For them, the galaxy is not about material gain but a tool for furthering advancement and understanding of consciousness through spiritual disciplines, para-science, human augmentation, Noetic enhancers, the arts and social politics. The Order takes great pride in its achievements, both past and present, enacting lawful humanitarian and developmental interventions to the benefit of the Alliance of Independents and its citizens. They claim to be pacifists, but fiercely defend against pirates the inhabited systems of the California Nebula. I know. I have been fighting side by side with them. That is why, when I told them that I was coming back to the Bubble, they asked me for a favor I could not refuse.

One of the Exemplars leaders, Elder Arianna Winkler, asked me to take secretly a passenger back to the Bubble. It seems that I have made a reputation of being good smuggling people. And that is how the mysterious passenger, that is how I call her, got into my ship. And I have not felt comfortable in my own boat since then. I have no passenger cabins, so we both have to share the crew quarters. Despite that, we have not exchanged more than a couple of words during the trip. She tries to avoid me and not use the common rooms like the galley or the restroom while I am around, but that is even worse. Is like having a ghost in the ship. A creepy and silent ghost. 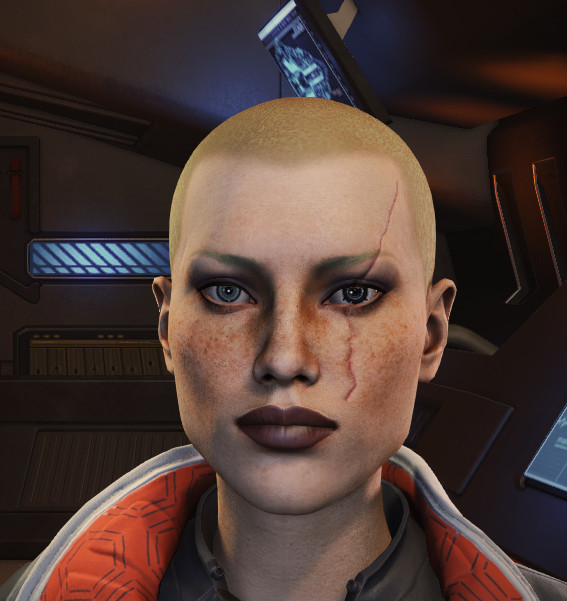 How should I describe her? She is young, but there is a hardness and determination in her eyes quite uncommon for her age. Well, at least in one of her eyes. The other one is a cybernetic prosthetic. That is one of the most polemic aspects of the Exemplars. They believe in human enhancement through spiritual disciplines and cybernetics. And my passenger has clearly been augmented. She moves effortlessly, with the grace of a feline. The life in an asteroid base with minimum gravity takes its toll to the body, but her physic seems not to be affected. She has the musculature of an elite athlete. You cannot get that body tone living in such a place, not without using unconventional methods. Like many combat pilots, she opts for the buzz haircut, quite practical for soldiers or those who pass a lot of time in a starship. And there is the scar. A hideous cut crosses the left side of her face from the forehead to the cheek. I have seen many cuts like that and I can tell that was made with a blade. She probably lost her eye because of that cut. Scar and haircut apart, she could have been quite a beauty, …in other circumstances. I have noticed that she has a subtle imperial accent that she tries to conceal, maybe that is why she barely speaks. She clearly was not raised in Alliance territory, nor the Federation.  Besides all these, the identity of my passenger is a mystery, same as her name, mission and final destination. She just asked me where I was heading and I said Alioth and then Wolf 406. She said that she will disembark at Hamilton Gateway. She does not look to be in a hurry though… (Sighs) Only one thing is sure about her, I will feel quite relief when she is out of my ship. I am used to be alone on my boat. I hate this situation. 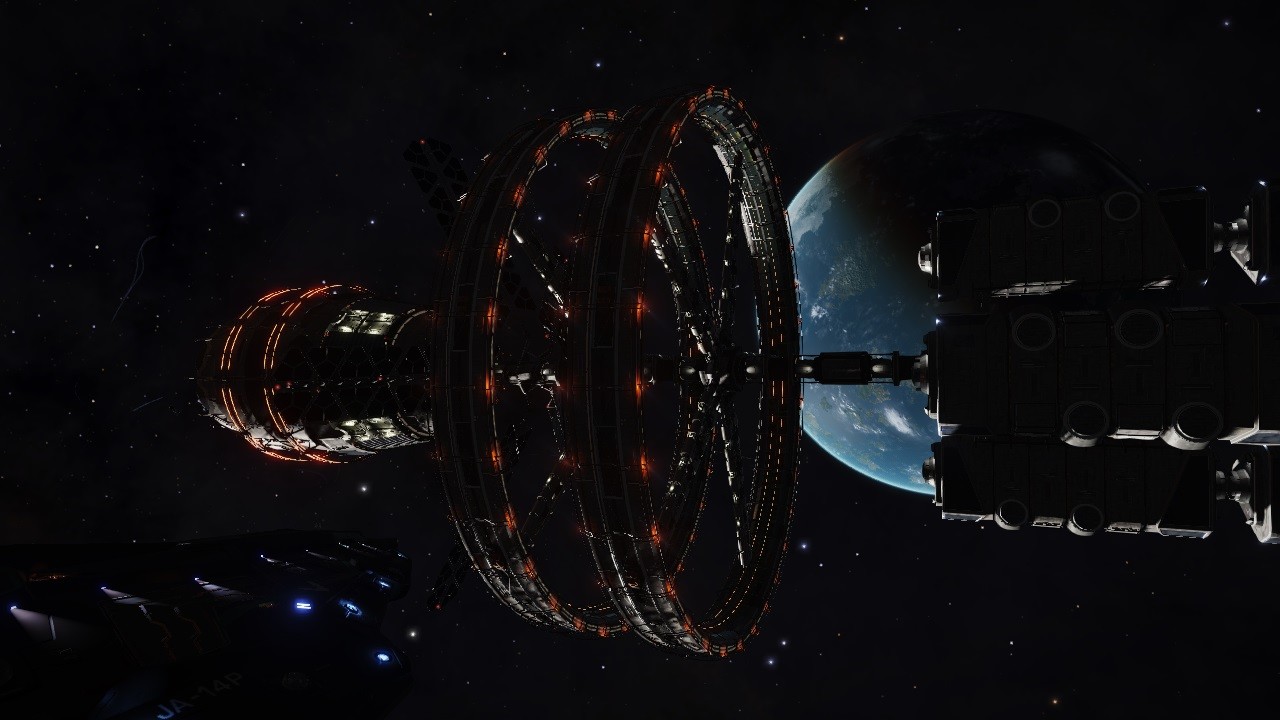 The Deimos is a formidable multirole vessel, but not suited for deep space travelling. Its jump range is mediocre. So, like on the way to the California Nebula, I have decided to make a stop in one of the connection outpost along the route, New Beaumont Dock. From here there are 29 jumps more to Alioth. I will continue my trip tomorrow.

Jav Marlo signing out.
Do you like it?
10
Shiny!