Welcome to the White Scar Contingency!

We are an LGBT+ friendly player group with a focus on enjoyment for all players both new and old.

We were founded under three key principals:

The White Scar Contingency is a faction comprised of 5 cooperating divisions lead by a single executive position known as an Overseer. The 5 Overseers maintain a legislative presence between each other, meeting periodically to hold a council before attending members of the faction in a forum discussion. Within each division pilots are free to create their own hierarchies and wings at the discretion and approval of their overseer. The five divisions are recognized as follows:

The Clan- Represented by the earth Spotted Hyena, the Clan is a group of lighthearted pilots who are always on the pursuit of happiness, they seek positivity in their work and feel that fun is the most important thing in life. If you don't enjoy what you do then whats the point? They often do not take themselves very seriously and do not hold themselves to the highest level of discipline.

The Reign- Represented by the extinct earth T.rex, the Reign is a proud division of goal oriented pilots. They are highly driven to achieve their ambitions through attaining the courage to improve and hone themselves everyday in a wide range of interests and professions among their diverse array of pilots. They seek to conquer fear and embody courage in attaining their goals and seldom steer away from healthy competition. Often accused of being quite bold or overconfident, the members of the Reign relish in brazenly facing new challenges and impossible odds head on.

The Conroi- Represented by the extinct earth Pangolin the pilots of the Conroi seek to accomplish their tasks with a high degree of valor and honor. they hold themselves to the highest standards of poise and respect and expect the same of others. Politeness and hospitality are a mastery of theirs and these traits fall within a greater drive to keep others safe and accommodated. The Conroi seeks to be helpful but are not always quick to act, they are known for being careful thinkers and have developed skillful defensive strategies.

The Shoal- Represented by the earth Shark, its pilots are notoriously anti-materialistic. Members eschew luxuries instead opting that simplicity is the key to success. Many consider them monastic as their members believe that indulgence traps the mind and keeps one from achieving balance in their lives. The members of the shoal are generally peaceful and content to do all kinds of work with a simple satisfaction, however crossing them will seat you with a fierce grudge as they are highly territorial of the few assets they keep and of each other, more so than the faction at large.

The Unkindness- Represented by the earth Raven, the members of this division show discipline in subtlety. Self-control and self determination is the key to their virtues as they carry out their dealings mostly without notice or bombast. The members of the unkindness carry a sense of tact and efficiency often considered a bit cold by others but are masters of self discipline and have high expectations of themselves and others to drive themselves to get the job done

Despite the 5 divisions having such wide variation in their philosophies they all share one belief in common, that only through our combined efforts can we make a true impact on the galaxy at large. This is in line with our motto Virtute Simul meaning Power Together.

To support itself the Contingency carries out a variety of contracts for other groups and powers throughout human space and beyond, regarding everything from exploration surveys, to relief aid, to mercenary combat and assassination. Internally the Contingency is a feudalistic power. its power structure is loose aside from the 5 executive and legislative overseer positions which have successors designated by the overseers themselves should they die or choose to retire or step down. Using its assets of skilled pilots and the resources they acquire through its many allegiances across human space developed through contracted business the Contingency can leverage its influence and power to control a certain amount of territory. 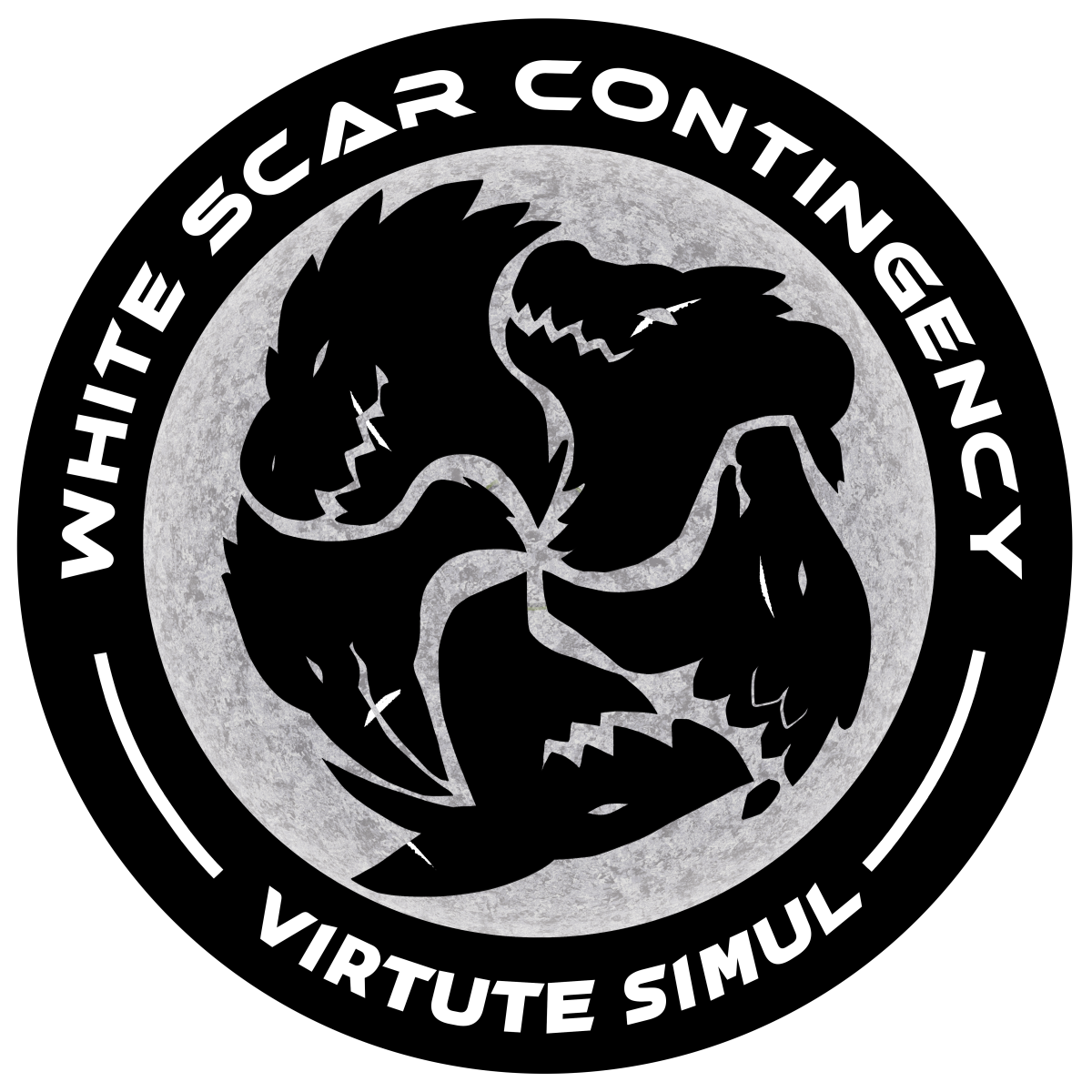 The White Scar Contingency is a loosely feudal faction that lacks firm hierarchy. after a devastating conflict 5 commanders spent several months scouring known space for a new place to settle. With their pooled resources, they founded the Contingency on several key principles: Loyalty to the group, credits and making sure each individual has their big moment and gets an opportunity to leave their mark on the galaxy and not be forgotten in a world that seems to get smaller every single day.