Flowers in the Black - Part VI

The atmosphere of quiet dedication that usually enfolded Professor Palin's base was gone, replaced by an almost manic intensity that was tangible almost as soon as the ship touched down, it was certainly clear beyond the hangars as the usually peaceful corridors, empty beyond the occasional lab coated tech, overalled  mechanic or flightsuited spacer were now filled with activity, drive and people. Purpose almost flowed through the brightly lit base rather than the usual quiet contemplation. The Professor was said to be working with the new Aegis organisation on a prototype scanner that would be of some use on the Thargoids, and it appeared his new partners expected results, and fast.

"Hello Stannis," a smartly dressed blonde woman said, stepping out to intercept the three visitors as they emerged from the docking area, "hi Claude, and I don't think I know you."

"Allow me to introduce my wife, Ms Kira Goméz," Jellicoe said with a touch of pride, "Kira this is Zoe Felstead, senior researcher."

"He's an Earther, they over formalise everything." Kira said smiling at the woman."

Zoe nodded, no her eyes darting to a pair of men in blue overalls loitering a short distance away. "This way, quickly." She said opening a door and heading off down a side corridor, more overalled men were in evidence, manhandling sealed crates onto a trailer.

"Who are they?" Jellicoe asked as they hurried past.

"Shut up," The woman hissed, "and keep your head down."

They had a short walk before Zoe keyed open a door and led them into what looked to be a mess area for the staff, grey panelled walls, dull metal tables and chairs with harsh white lighting.

"Help yourselves to tea and coffee," Zoe said as the door closed behind them, "There'll be something to eat in the dispensers as well, only ration bars but better than nothing."

"Where's the Prof?" Jellicoe asked, grimacing after a swig of the disgusting vending machine tea.

"Where do you think the galaxy's leading expert on xeno-biology is right now? Working. Have you any idea how busy he is?"

"Too busy to see an old friend?"

"Too busy to take a shit most of the time," Zoe said propping her feet up on one of the tables and taking a long swig of coffee, "besides..." she paused.

"You're not a good man to be associated with Stannis." Zoe said bluntly. "The Feds and Imps want you for terrorism and the Alliance for murder and espionage."

"I didn't realise Ishmael was a superpower stooge, especially after what the Feds did to him," Jellicoe replied leaning back and lighting a cigarette.

"He's nobody's stooge Stannis," Zoe replied, her eyes flashing with anger, "but the Feds and the rest of them aren't just going to vanish, and we can't clear off into the black like if we upset them you can, We have to work with them, the way things are looking we all have to pull together, our whole species if we're going to survive. Ishmael likes you Stannis, but you're trouble and trouble is something none of us need right now."

"So Palin's back in the loop and doesn't want to rock the boat?" Jellicoe asked with a wry smile.

"He has the chance to do what this centre was built to do. You've seen the wrecks out there, you know what these things are capable of. The superpowers are coming together to meet this, all of them and others as well, what's so different about you or is Stannis Jellicoe's ideological purity more important than billions of lives? With all the blood on your hands you've probably stopped caring." Zoe slammed her cup down as she finished, her voice high with barely controlled fury and her eyes blazing. "I'm sorry you didn't deserve that." She muttered.

"I deserved every word of it," Jellicoe replied stoically, taking a long drag on his cigarette, "but a lot of this makes no sense, I've encountered these things twice now they left me alone until I got in the way of what they were doing, are you sure they see us, all of us as the enemy?"

Zoe leaned forward, breathed deeply and ran her hands through her short blonde hair, "No I'm not," she said quietly, looking around as if expecting someone else to be listening, "but would you bet the fate of the entire human race on that? We have to be ready for anything and wouldn't you rather have a weapon you don't need than need a weapon you don't have?"

"We're not doing here no, but..." She was cut off by the sound of the door opening, three men in the blue overalls they had seen others wearing walked in, two carrying assault rifles, the third, clearly the leader had a pistol holstered at his waist.

"Commander Jellicoe?" The leader asked. "Come with us please Commander."

"I take it refusing isn't an option?" Jellicoe asked calmly.

Jellicoe was led through the base, more men and women in the now familiar blue overalls, some armed others transporting crates or data slates, and air of concentration and industry surrounding them until he was ushered into a small room, black walled, dimly lit and empty save for a small table with two chairs on opposite sides.

"Sit down please sir, someone will be with you shortly." The leader said before leaving the room with one of the guards. With little alternative Jellicoe sat and waited, he recognised the technique from his navy training, let him fret and stew, get hungry, confused and frightened before the questioning began, he reckoned between two and four hours would be about right.

Six and a half hours later a short, slender man with a slight stoop entered the rom and sat down without introducing himself. He had a sharp face, his hair receding over a high forehead, small, sharp eyes magnified by a pair of round spectacles that sat, rather awkwardly on a prominent nose. The man placed a data slate, a cup of tea and a sandwich on the table, took a sip of tea, bit into the sandwich and without a word began studying various holo-documents for a thirty minutes before looking up.

"Commander," he finally acknowledged Jellicoe, "you will tell me just what you are doing in the Pleiades." He said in a flat voice completely devoid of emotion.

"yes." The man said simply before returning his attention to his slate. Unlike the others he was wearing a black suit rather than blue overalls, cut in the style of a military uniform but lacking any insignia of rank or unit.

"This is an independent system," Jellicoe said after the silence had stretched for several minutes, "you have no jurisdiction here and no right to hold me."

"That remark insults both our intelligence Commander, don't make it again, if you believe you are free to leave then by all means try to do so."

"I think your goon by the door might have other ideas."

"Correct," the man said removing his spectacles and looking straight at the spaceman, "and this is the reality of the situation, I have all of the power and you have none so I will ask you again, what are you doing in the Pleiades?"

"I came to investigate these alien ships."

"I'm a curious sort of fellow."

"Do better Commander." The man said, his voice still calm and flat but now carrying just the slightest hint of a threat.

"Like the rest of the human race I want to know what's going on and how much danger we're in."

"A lot of questions, no answers."

"Will yo uhelp me find those answers?"" The man asked.

"No"" Jellicoe replied with a snort of sarcastic laughter.

"That would be very foolish Commander. Of the three superpowers who fund my organisation two would lock you up for life while the third would execute you, I could very easily hand you over to one or you can help me, yourself and all mankind."

"We need tissue samples from these Thargoid ships, collecting them is a very skilled and dangerous job, you are an Elite ranked pilot with a very powerful ship." "And if I refuse?"

"I'm sure you're intelligent enough to work that out for yourself."

"Very well, give me the kit and I'll do the rest, now are we done? I'm hungry and I'm out of cigarettes."

"I'm glad you've seen reason Commander, but just in case you have any second thoughts your wife will be our guest on the Oracle until the job is done."

"Now listen to me you snake, this is between you and me, leave her out of it." Jellicoe spat, leaping to his feet. The guard took a step forward and raised his rifle but the man calmly raised a hand to check him.

"Remember what I said about power Commander Jellicoe?" The man asked, his voice lowered, his face still a mask.

Jellicoe put his face up close to the mans. "If you harm a hair on my wife's head I will burn every Aegis ship I see from here to the bubble." He snarled

"I believe you Commander," the man replied quite calmly, "and while I do not expect you to like me, you will learn that you can trust me."
Do you like it?
7
Shiny! 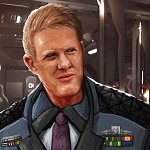