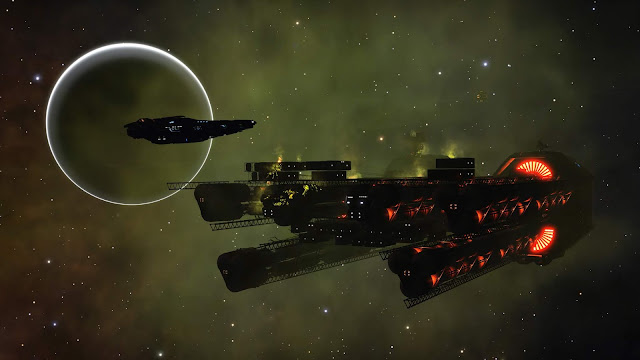 Finally I was ready to take the Spartan to do some extra engineering for maximizing the Frame Shift Drive mainly, and some other upgrades. I rent a ship at Kuk, to use as a taxi to Cubeo, where the Spartan was docked. After leaving the Chelomey Orbital, it took 13 jumps to meet Felicity.

It wasn't our first meeting, so she new what she needed to do, to boost the ships jump range. Still it took her 2 days to finish it. I admire her knowledge about the equations and science that i mostly don't understand. But she is the expert, I know that much. She even told me about a time that she was stuck in unscoopable stars with low fuel, and she did a trick to exceed the jump range to overcome the situation. She says it was the begining of everything. In time she perfected her knowledge, and still says that there can be much more, but it is a dangerous alteration for now. "People can stuck in Hiper Space for good. I'll keep it to myself untill I figure out a foolproof way." as she said.

Anyway after everything was ready, I left the station and I was checking the Nav Panel for my next stop. I saw the signature of an Aquarius Class Tanker. An old friend was the Commander of one of those. I aproached to hail the captain, but there was no response. Tried a few more time... still nothing. Turned my course and dropped from supercruise.

A sick yellow-ish green mist was surrounding the carrier. I know what this is. Never encountered one, but I know that this is Thargoid stuff. Switched to battle condition immediately. We used some of the ammo for testing purposes but we have a large ax multicannon at arsenal here. Everyone on board was looking to see the results on live. We do afraid too, it will be our first encounter, but everyone also believes we can do it.

Aproached the tanker at a safe speed, Though there was no Thargoid ships close by. Probably they run away when they saw us. The carrier in the other hand, was on fire... burning on multiple components, leaking flamable gas and O2 reserve on all around the ship, including the bridge. All the outer surface is covered by that glowing corrosive stuff, mixing with the gas to combine a deadly poisonous mist.

Hailled the bridge again to get a response... Nothing! Told the comms officer to broadcast my message in all frequencies... "This is ZethG Commander of TGP-SPARTAN. For anyone listening this is a distress signal calling for help... in the name of FBY-8839... We need all available an capable spacecraft for the rescue and salvage mission at Deciat A 6. Repeading Deciat A 6... Spartan out!"

After I turned of my radio, we all heard a scrambling static at first and I heard the voice of my friend Benjiro...

"Zeth!... Is that really you... We lost our wide range antenna. Thank to the Gods..." and he yelled to the others while mic was on "We are saved people, They found us.."

I heard both, the cheers and the screams of injured ones. Comms officer shouted at me that, 6 more ships captured our distress call and on the way, including 2 emergency medical units.

"Benji... I am sending the shuttle to you now. 2 medicrafts are on the way, including other ships. Start evacuating......"