Johnston was terrified - not because he was worried about the girls failing and what that would mean; more than likely their death. Rather,  because he was terrified they would succeed. If a couple of vigilante teenagers went on a murderous rage throughout the station, it would wreak havoc on the local economy and possibly even spark a series of copy cat vigilantes.

He sifted through his normal amount of station paperwork as the day progressed and went on his regular patrols. But more and more the psychotic plan weighed more heavily on his mind. Johnston simply couldn’t get it out of his head. For some reason, he had a terrifying suspicion that the girls were deadly serious.

He waited out the rest of the week with baited breath, always nervous as to what the next days patrols would bring or waiting for that call that there had been a homicide on the station. At the end of the week, the tension was killing him. He walked down to a small shop in the main mall. He knew just what he needed to do.

The noodle shop looked much like any noodle shop in any mall anywhere around the universe. Located on in a dingy corridor in the run down section of the mall, the noodle shop expressed a generalized stink. Other shops positioned themselves as if they were trying to give the little hovel as much space as rent would allow. A faded, neon sign gayly hoisted above a red and yellow grimy awning hoisted a bowl of noodles with two grey chopsticks lopped into the bowl. The neon of several of the letters flickered, in others, the lighting had long since fizzled out. Where at one time the sign proudly flashed: WO’ANG KING RAMEN now just flickered, only the W, A, N, K and R staying illuminated.

Johnston squished more than he walked, through the door. The floor contained the perpetual stickiness that is only rivaled by the hands of small children and old popsicle sticks. Loud noises that indicated something that would pass as food (somewhere) was being prepared, or at least vigorously burned, in the grease trap that served as the kitchen. Johnston carefully went to lean on the counter and then thought better of it. “Wang!” He calls to the back. A grimy paper hat which had previously been bobbing around beneath a retaining wall paused. The hat slowly hovered in the serving window before a pair of beady black eyes squinted at him through a pair of jam jar glasses. “How many time I tell you?” The beady eyes shifted and disappeared as it neared the kitchen door. “My name pronounced “Woah ang. What you want copper?”

Johnston laughed. “How many times to I tell you, lose the cheesy accent. You’re not fooling anyone you old fool.”

Wo’ang braced himself up against the counter with both arms outstretched, looking around appraisingly. “Oh - I know. But you sell what people expect.”

“Really?” Johnston leaned back to peer into the kitchen. “So why do you call this food?”

“Yeah, I didn’t need to wear those thick glasses of yours to tell you that.” Johnston said appraising a nearby menu. “Is this any good?”

Wo’ang looked at the particular selection. “Hmm no. Don’t get seafood. You want good seafood go to the jade noodle that on level two, five shops from the lifts.”

“You can’t even recommend your own food?”

Wo’ang shrugged, “I know my weaknesses. So what you need since I know your not here to get salmonella?”

“I need you to get a message to a settlement for me. I can’t use my station lines because I know those are monitored.”

“Ohh...Mr. Police man have mistress?” Wo’ang popped his dentures out and waggled his grey, bushy eyebrows.

“Oh god, please don’t do that again. No, I just want to follow up on a case and don’t want any one else peeking on my messages.” Johnston said sliding a sealed envelope across the counter. Wo’ang went to catch it but it kept sliding, undoubtably building momentum on the well oiled counter. The letter flopped with a squish on the floor.

“Okay but you owe me.” Wo’ang said, suddenly all business.

“I’m afraid to ask.” Johnston said looking back over his shoulder.

“I have annual health inspection next month.” Wo’ang said adjusting his binoculars.

“You said I owe you - I can’t work miracles.” Johnston deadpanned.

“Yeah but it big lady. She always sweet on you. I just want you to warm her up to me.” Wo’ang said with a wink.

“You wanna warm her up?” Johnston asked as he went to stroll out the door, “Then light a match in here.”

Wo’ang bent to pick up the letter. A crack in his back stopped him short. “Bugger.” He snagged the letter and then hunched back through the kitchen. “Dammit, my noodle burned. Again.”
Do you like it?
8
Shiny! 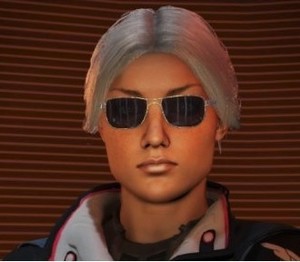