Vallysa had never considered herself to be the kind of person who could become an addict, but most people learn hard truths about themselves the hard way.  In the months following the victory ceremony  on Polya Coliseum over the Thargoids, her dreams had continued to terrorize her.  Simply flying was no longer enough to take the edge off.  As she slipped perilously towards an insomniac's never-asleep, never-awake state, she realized she needed to do something drastic to reset her psyche.  With little warning, she appointed her lieutenant to take over daily operations, hopped in the Ferdinand, and took off.  She didn't know where she was going, aside from somewhere remote.  Perhaps the silent, solitary blackness of the void would be enough for her to rediscover her center. 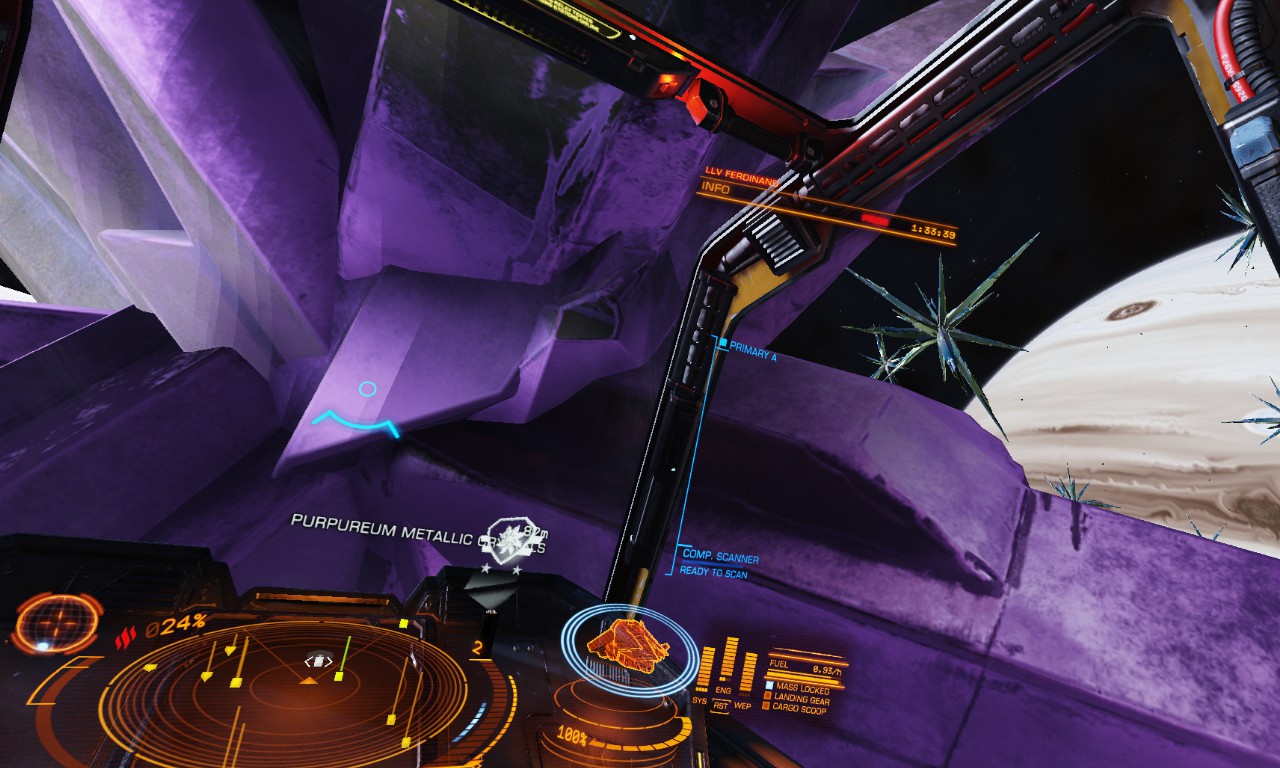 It seemed like a good idea at first, but she found that the dreams followed her to the middle of nowhere.  Every night she'd see Melvin's expressionless face, just as she'd found him in the carbonized wreckage of her fighter control pit after a particularly devastating encounter with a Basilisk.  She also saw the same girl, ripping flower petals "She loves me--she loves me not--she loves me...".  Every day, she threw herself at her navigational tasks, looking for uncharted stars, planets, anything, that would distract her from the waking dreams.  It was when she decided to land on a remote, desolate rock far from any star's warmth she found something that would finally send her over the edge.

She had followed a strange, faint signal.  Nothing more than a slight abnormality, but certainly something that shouldn't exist this far out in the middle of nowhere.  It was metal.  Not metal traces in rock, but pure metal.  Steering the Ferdinand towards the reading, she found a suitable landing spot on the red rock and descended into her rover.  Driving towards the signal, she crested a hill and couldn't believe what lay before her eyes.  Here, in the middle of nowhere, was a crashed ship with wreckage strewn over a square kilometer.  Then, she saw the source of the signal: escape pods.  Occupied escape pods, with all systems functioning.  Through the fog and fear, she found her life's purpose crystallize before her eyes: all moments had let to this one, so she could save these people from a slow, isolated death far from those who would ever remember them. 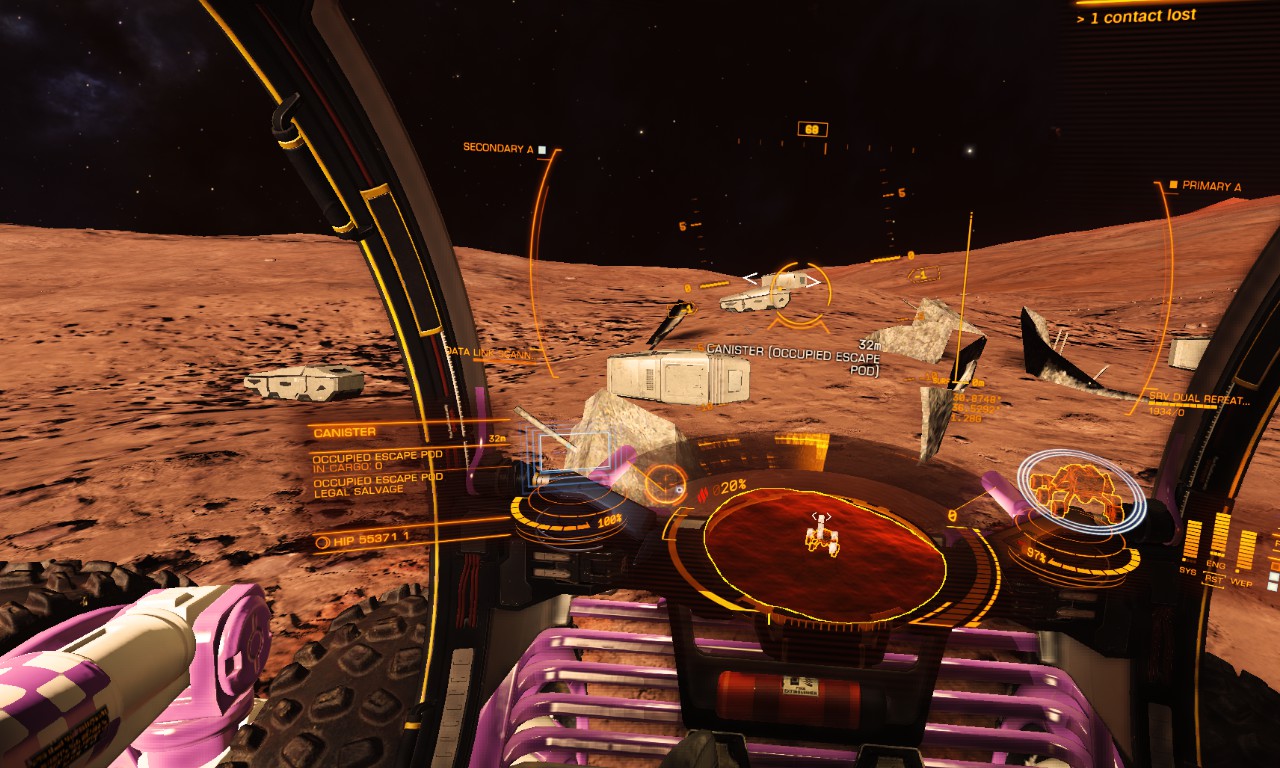 Then, she counted the pods.

Five.  There were five pods, all functional and occupied.  Probably a family.  With her limited cargo hold in the  Ferdinand, she could only take two.  She had no idea how long they had been out here, waiting for the infinitely small chance that somebody would stumble across them, but these pods would surely become tombs before anybody else had a chance of coming out this far.  Enraged--desperate--exhausted, Vallysa's mind shattered, with all of the decisions she made up to this point apparating out of the fog into singular moments before receding back into the abyss of her subconscious mind.  Why did she only have enough cargo space to take two?  She cursed herself.  She cursed the never-used ship's self-repair module, taking up the space where she could have placed this cargo.  She cursed Randomonius.  She cursed the Emperor.  She cursed the Federation.  She cursed the Thargoids.  She cursed the Guardians.

So she picked two.  There was no way to know who was in what.  The two, preserved in their semi-catatonic state induced by the lifesaving technology of the pods, might be aware they were rescued.  They would have no idea until they were returned to civilization that only two of them made it out.  The three left behind may have heard the sounds of the rover picking up pods and thought against all odds they had been saved, then heard the sounds fade away, along with any hope of their own survival.  No communications possible, just unbelievable hope, then an inevitable descent back into despair.

Driving back towards the Ferdinand, Vallysa numbly spotted one last thing, a small package on the ground.  She picked it up with the rover's claw and arrived at the ship, which automatically took the rover's two cargo pods and nestled it in its belly for safe-keeping, maddeningly oblivious to its own shortcomings.  Back aboard, she lost the drive to continue on and stayed in her cramped cabin for days, fighting the notion that her miserable life was the only tether the two pods in her hold had to the promise of their own lives being restored one day.  In a moment of numb torpor, she remembered the package she'd picked up and opened it.  The symbol, smell, and distinct texture gave it away: Onionhead.  Beyond reason or concern, she saw the answer to all her problems sitting right there in the palm of her hand.  She ate a couple of the seeds.

The feeling was incredible.  Her loneliness evaporated.  Her despair waved her goodbye and dissipated like a cloud beyond the walls of her ship.  Finally, she felt content, rebooted her navigational drive, and took off for the next wondrous destination.  She plotted and jumped, explored and documented, and she slept.  She slept better than she had in a year.  She saw wondrous things, hummed to herself while checking on the vitals of the pods' occupants, enjoyed the chemical complexity of her deep-space rations, and marveled at how good she had become at what everybody always said was the dangerous venture of solo, deep-space exploration.  Whenever the good feelings started to get crowded by her memories and dreams, a couple more seeds was all it took to get her back on track.
She lost awareness of time and distance.  Filled with childlike wonder, she broke into her carefully curated stash of rare materials for long-range hyperspace boosting and plotted further and further into the void.  She wanted to get high enough to see no stars in front of her, just perfect blackness.  Inject, jump, inject, jump, inject, jump........... 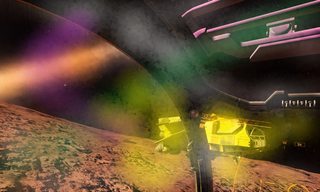 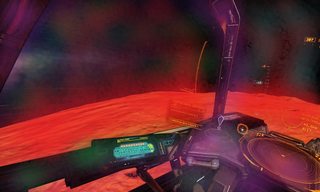 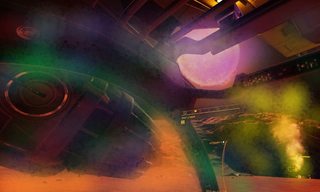 She awoke violently in her seat, sweating, staring into the maw of a white hot star.  Adrenaline cut through, moving her muscles reflexively, yanking the Ferdinand away from the celestial inferno, dropping a heat sink, and throttling away from a fiery death.  After a few minutes she regained her composure, the cabin cleared of smoke, and she looked at her instruments and surroundings for the first time she could remember in a while.  She checked the date.  That couldn't be right.  That was...how long ago did she leave?  Foggy memories bubbled up to the surface of her brain, and she shook them away.  Then, piercing through the confusion--the pods--she vaulted herself towards the cargo hold and checked the systems.  Still okay, but not for much longer.

It was time.  Pulling up her charts she found out where she was -- Frack! -- and plotted a beeline back towards the Bubble.  Hopefully she could make it in time.  Hundreds of lightyears later, her COVAS blinked and told her she was finally within range of the Pilot's Federation deep-space relays, and she could download a Galnet update.  Some sort of food pathogen?  She continued back towards the Bubble.  It was time to get back to work.  Back to humanity, back to Arissa, back to her crew--her family.  She had almost killed herself out there, and that experience had finally given her the balance she needed to continue on.  She knew the dreams wouldn't be completely gone, and the memories of Melvin and the others she'd watched die would stay with her, but at least now she felt like she had some closure.  Plus, if they ever got too bad again...she eyed the remainder of the Onionhead...Just a little bit, to take the edge off when I need...
Do you like it?
12
Shiny!