But of course, the Galaxy has a sick sense of humor...Gagarin Gate lacks the facilities to process bounties, so instead of clearing my name I endured another humiliating round of anonymous refueling, sullenly watching the self-satisfied face of Progenitor Cedrick Roman of the Colonia Council smirking down at me from a billboard even as his lack of proper bounty facilities along the Colonia Highway caused me to languish with millions of creds in exploration data rotting away in my databanks...

Midnight is having a blast with the whole sordid affair, wasting no opportunity to use played-out gangster argot from throughout the ages. Some of the lingo I've heard before in period-piece holo-vids, but never delivered in the cultured accent of a transcendent academic. Having one who was regarded as one of the foremost geniuses of his time bandy about terms like "bust a cap" or "sleeps with the fishes" in the gravitas-laden voice of an auspicious university professor sounds a lot more amusing than it is in practice, I can tell you.

There wasn't a huge amount in the way of new discoveries on this leg, which I did over the course of one day in two forty-jump spurts. I nabbed a six hour sleep period in-between shifts, with Soma: Space Station on the radio as musical backdrop to my flight through the black. It would have been lovely to stretch my legs at Gagarin Gate, but instead of that I ended up hiding out on my ship, eating cold protein noodles while Midnight made japes about how Station Security was assuredly inbound on a mission to "put me in the big house" or, even worse, to "rub me out". I told the old man to "turn it sideways and jam it", a euphemism from my own youth which I am happy to say proved mystifying to him.

Next populated system along the route is Caravanserai, in Gandharvi, where I should finally be able to pay my tiny fine and rejoin decent society. I must remind myself to send those cops who tried to kill me back in Skaudai CH-B d14-34 a holographic greeting card featuring my naughty bits. It'll cost ten times the amount of my fine to transmit my well-wishes, but the price will be well worth it. I'm a decent ways past the halfway point on my Journey to Colonia, so there's reason to feel jolly. 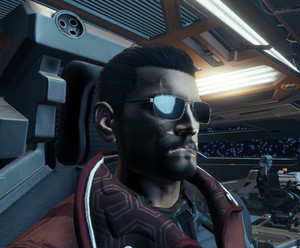