Mike and I head out to his new mining grounds, convinced we were going to hit the big time. Expecting pirates, I bring along a shield generator and hull re-enforcements, together with a few big weapons for defence. Apart from one pirate at the beginning of our run, and an Adder later on (where he didn’t even stick around for me to even see if he was friend or foe), we were not hassled at all for our first two hour stint.

Some pirates are so dumb. Firstly, they could be making loads more money, legally, by mining the stuff themselves. Secondly, they always seem to appear when you are about to start mining, when you have nothing in your cargo for them to take. They scan, get disappointed that you have nothing, then clear off.

Our yield is mediocre to start with, particularly for me as I refine my methods. I have two x 5A limpet controllers on the go at first, regretting not fitting a third. I also miss a trick with the prospector limpets, to get the full benefit of using these, it appears that I have to mine the rock with one active on the surface. Only two can be active at once, so if I scan a rock, find its good, but then go onto scan two more, the limpet on the first rock dies and the yield does not seem to be as good when mined. Its also tempting to take all the minerals that come off the rock, but painite is the biggie, much more valuable than the others. So I add everything else but painite to the ignore list. 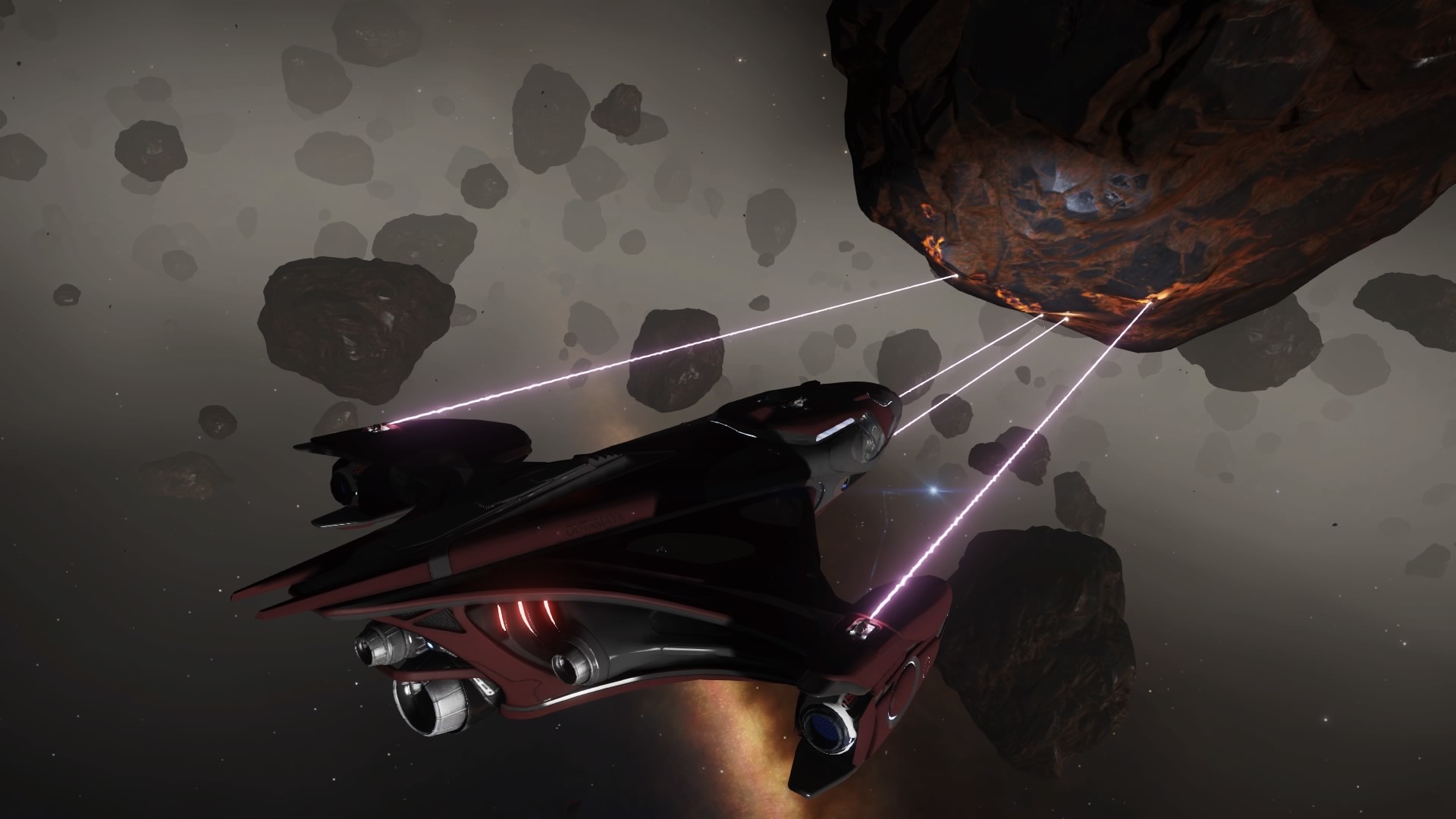 Compared to my 500+ tonne cargo space, my mining buddy has much less space to fill in his Asp. But he is being a bit more picky with his rocks and has fewer limpet controllers and lasers which slow him down a bit.
Its easy work, but not as fun as core mining. The overall operation is less complicated though.

After half filling my hold and a little break, I return to work, but this time I’m out of luck. I can’t find the sweet spot that I had before and end up only seeing a little painite maybe once in every 10-15 rocks. We then run into a pirate, who attacks me immediately. He’s not the one we’re on the look out for, but maybe he is connected in some way. A Fer-de-Lance. I should be able to take him out easily enough, but the Cutter is slow to turn and the underpowered 6A shield is already taking damage. I fight back, when I eventually have him in my sights, but his counter measures prevent most of my shots reaching him. Realising that this battle could go on for some time and that I run a risk of losing my ship and 200 tonnes of Painite, I do the sensible thing and high wake out of there. Two attempts at an indiction then follow – time to find a station, sell up and start again. 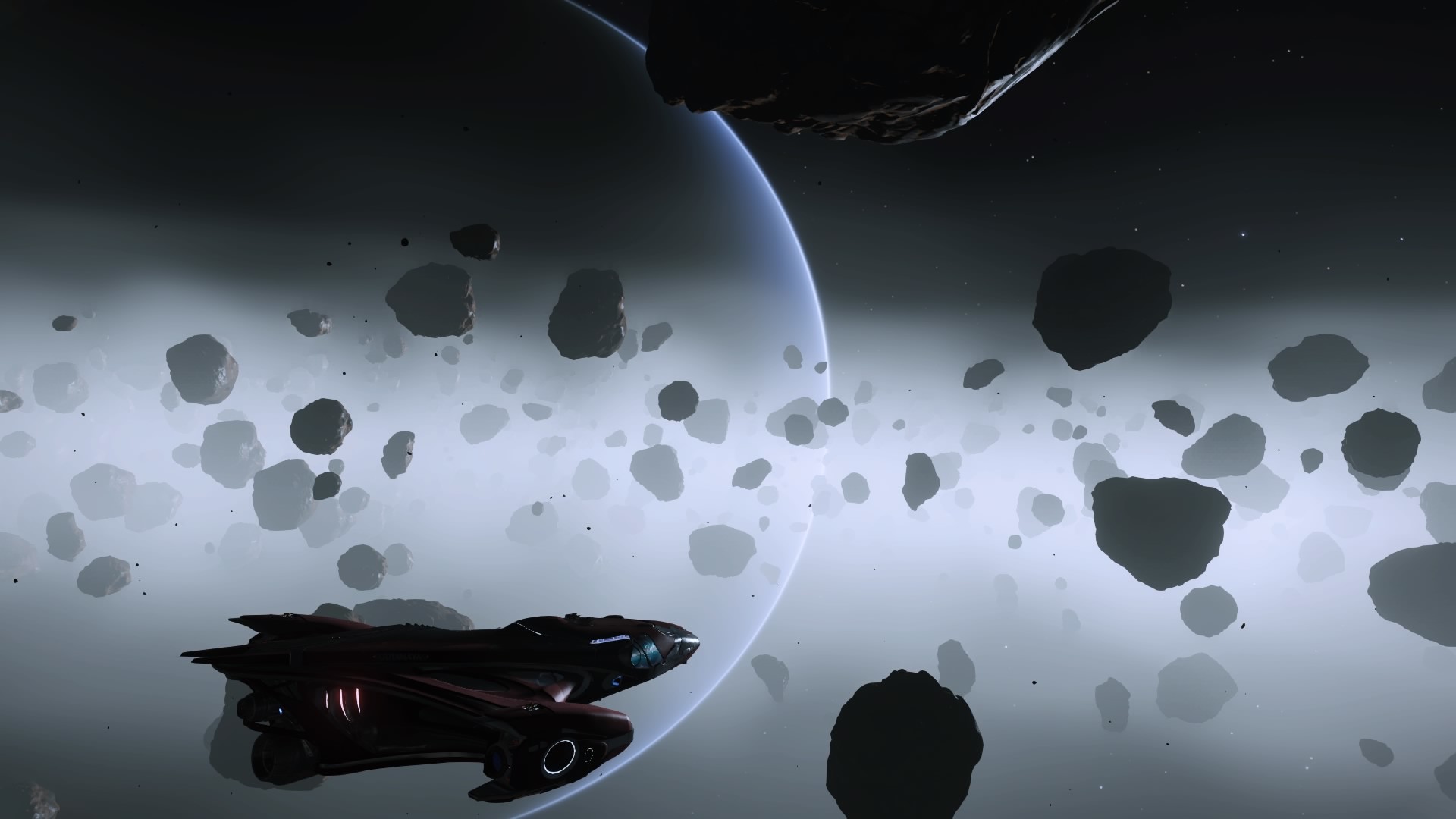 Flying a large ship like the Cutter takes some getting used to, especially after zipping around in smaller craft for some time. I take the ship to a local station for repairs, material trading and for that third limpet controller. On the way out I nearly lose it, along with the 200 tonnes of painite I’m still carrying to sell at a station with better prices. I leave the pad, then accelerate too quickly towards the exit, but with my direction of movement in completely different to where I'm pointing. The Cutter slams into the exit wall, knocking out the shields - this ship does not do emergency breaking. I’m then fined for loitering near the exit hole, but I cant move away, entangled with the far wall. Panicking, with my heart rate going like the clappers, I just manage to steer it away and back into the station before the authorities open fire on me. Phew.

Mental note, when flying a Cutter into and out of a station, be ultra careful and take your time!
Do you like it?
3
Shiny!