I was en route to Sol, looking for answers.

I had left the Perihelion behind and had boarded the Astyanax, my exploration focused ship, so the trip would be shorter. I couldn't wait to have a talk with my dad. Sure, part of that was because I really wanted to see him again. A holo projection just isn't the same thing.
But a very nagging small part of it was, because I now wanted to know more about EDI.

EDI. At first glance, it appeared that EDI was just another virtual assistant. Except, she was speaking with the voice of my dead mother.
It had unnerved me in the beginning, it had made me sad and angry. But now, her soothing voice provided comfort - and she was helpful.
She had automatically uploaded herself into all my ships and was now existing on all six of them. That had a couple of advantages: First, it meant I could use her almost like a crewmate. She followed orders and did a lot of smaller tasks very efficiently. And second, it meant I didn't have to wear the earwig - comfortable as it was - when I was on the bridge of one of my ships.

"Thank you, EDI", I muttered while stirring my coffee. Contrary to most safety regulations, I tended to use normal open ceramic mugs instead of closed plastic containers for my coffee. I found that coffee just tasted better when your nose could actually smell the brew.
Like my life, I like my coffee sweet and less dark.

"Charging frame shift drive", the dulcet baritone of my COVAS said and EDI added a some information about the next system. EDI was indeed helpful.


My father and I had agreed to meet on M. Gorbachev station in the orbit of Earth. While I kind of longed to visit good old England, my father thought, it would be wiser not to meet at home.
I didn't like it.

I was sitting in a Lavazza-Cafe (a brand still claiming it was original Italian), destroying the carefully made milk-foam artwork of my cappuccino the barista had created, when my father entered the cafe.
I jumped up from my table and within half a second I was hugging him like crazy.

"Hey, dad", I muttered teary eyed. I realized, I had cried more in the last couple of days than in the five previous years combined.

After quite a while, we managed to let go of each other and sat down. Dad waved for the waiter and ordered an espresso.

"So, you got my little present", he sad after the waiter hat put down his coffee and left again, "quite a shock, hearing her voice after all these years again, huh?"

"Yeah, quite a shock, indeed! You could have warned me!" I said.

"Shsh", my dad whispered and looked around him suspiciously, "I'm not sure anyone should know about this just yet."

"You cannot talk about personal stuff with her, so I know nothing. - How did you ... make her?"

"What?" I exclaimed a little too loudly. I quickly glanced around me but no one seemed to notice.
"What do you mean? Who made her?"

My father made a calming gesture with his hands and answered: "I don't know for sure but I am pretty sure Mark sent her to me."

"Mark Rettenmeyer?" I was utterly flabbergasted. Mark Rettenmeyer was my father's friend. A German professor teaching in Oxford university. He was the one who helped me getting a job as a history professor there and we also became good friends.
I hadn't heard from him in a while.

My father drank his espresso und carefully put down the small cup. "He vanished."

Again, my father looked around. "I got the package from him", he finally said, "but EDI was biometrically locked. She just told me, that she belonged to you. But I managed to trace the package to its origin."

"The place where your Uncle's career had started", he answered. 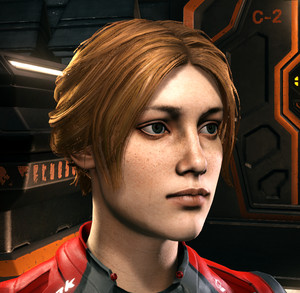