I was right about the Thargoid activity. Out in the Celaeno system we’re getting signal sources everywhere. Not only that, reports are coming in of similar activity out in the Witchhead nebula. Raven and I visit a few signal sources and engage some scouts, but are soon called back to the Artimis Lodge – something big is going down.

We arrive back to the station and its in a bad way. While we were away, a swift Thargoid attack has badly damaged the station and its in emergency lockdown mode. As we approach, we are asked to help out with an evacuation. Our Federal Assault ships are not best suited for this, but we manage to pick up a few survivors. My Cutter is still docked inside, this may be better for Thargoid retaliation, certainly for lifting passengers out of there, but its not going to happen. The Cutter itself has sustained damage and has come loose from its bay. Even if I were to get it moving again, negotiating the debris field would be very risky. 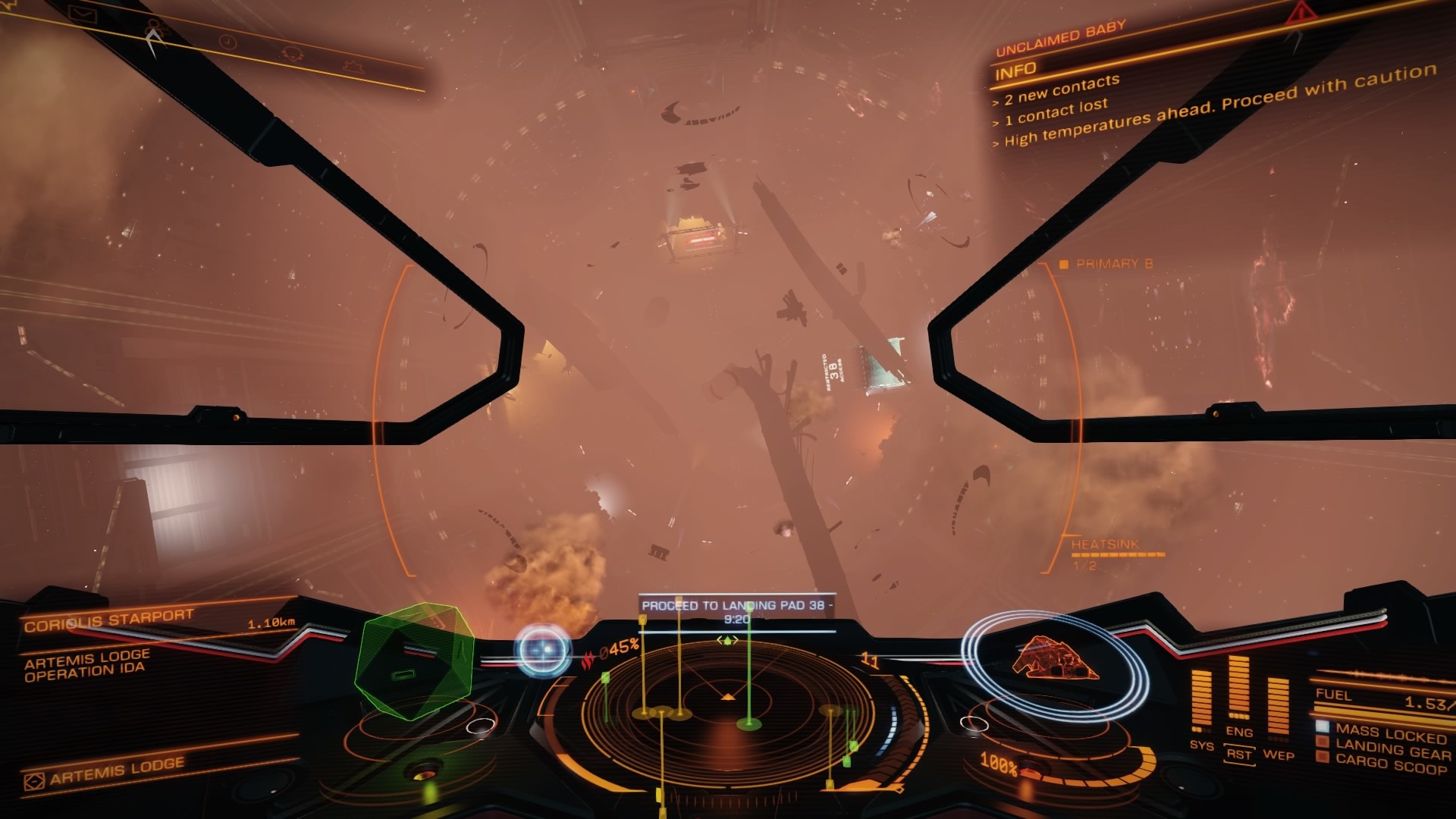 We stop of for repairs at the rescue ship nearby, dropping off the survivors, two of which are commanders who are keen to get back into the fight. An `AX conflict zone` has formed on the outskirts of the system, a battle ground where human ships are gathering to take on Thargoid forces. They need all the help they can get. The FAS `Unclaimed Baby` is all I have at my immediate disposal right now. Ineffective against interceptors, but fantastic against Thargoid scouts. So Raven in her FAS `Chaos Engine` and I head out to the AX-conflict zone to take on the scouts. And there are loads of them. 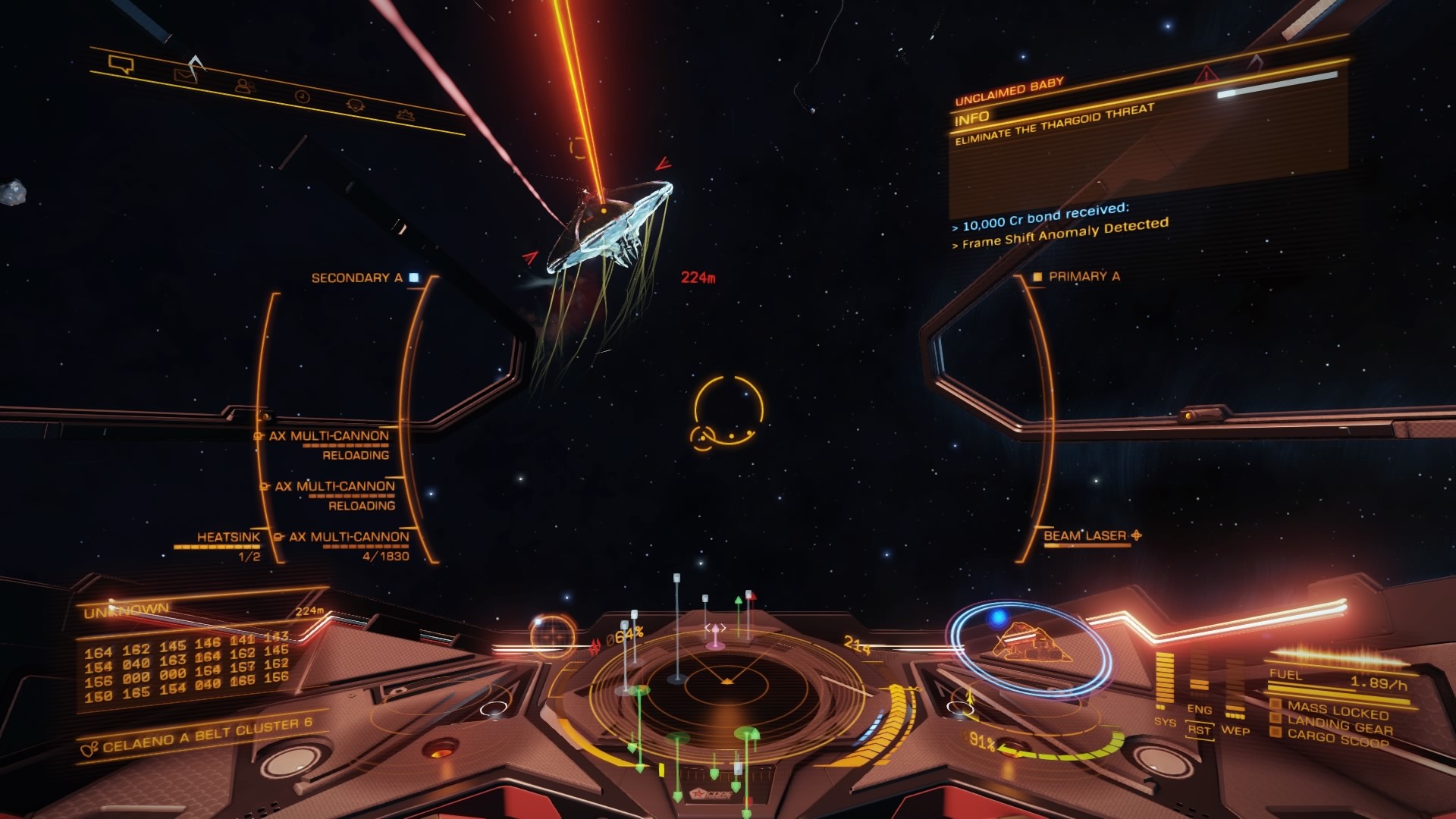 The radar screen is filled with activity as we join the fight and are welcomed into the team. A cocktail of human ships such as Cobras, Kraits and Anacondas are darting about among several Thargoid scouts. Its hard to keep track of numbers, since they constantly change with new arrivals and the casualties that follow. The comms channel continuously relays messages from other commanders in the area. Raven and I stick close together and attack the nearest red markers. We begin taking down scouts, but they are using their special abilities a lot more. There are more missiles being launched by them and their regeneration ships are more active, slowing our progress.  Just when I think we’re getting the upper hand on them, more scouts arrive. 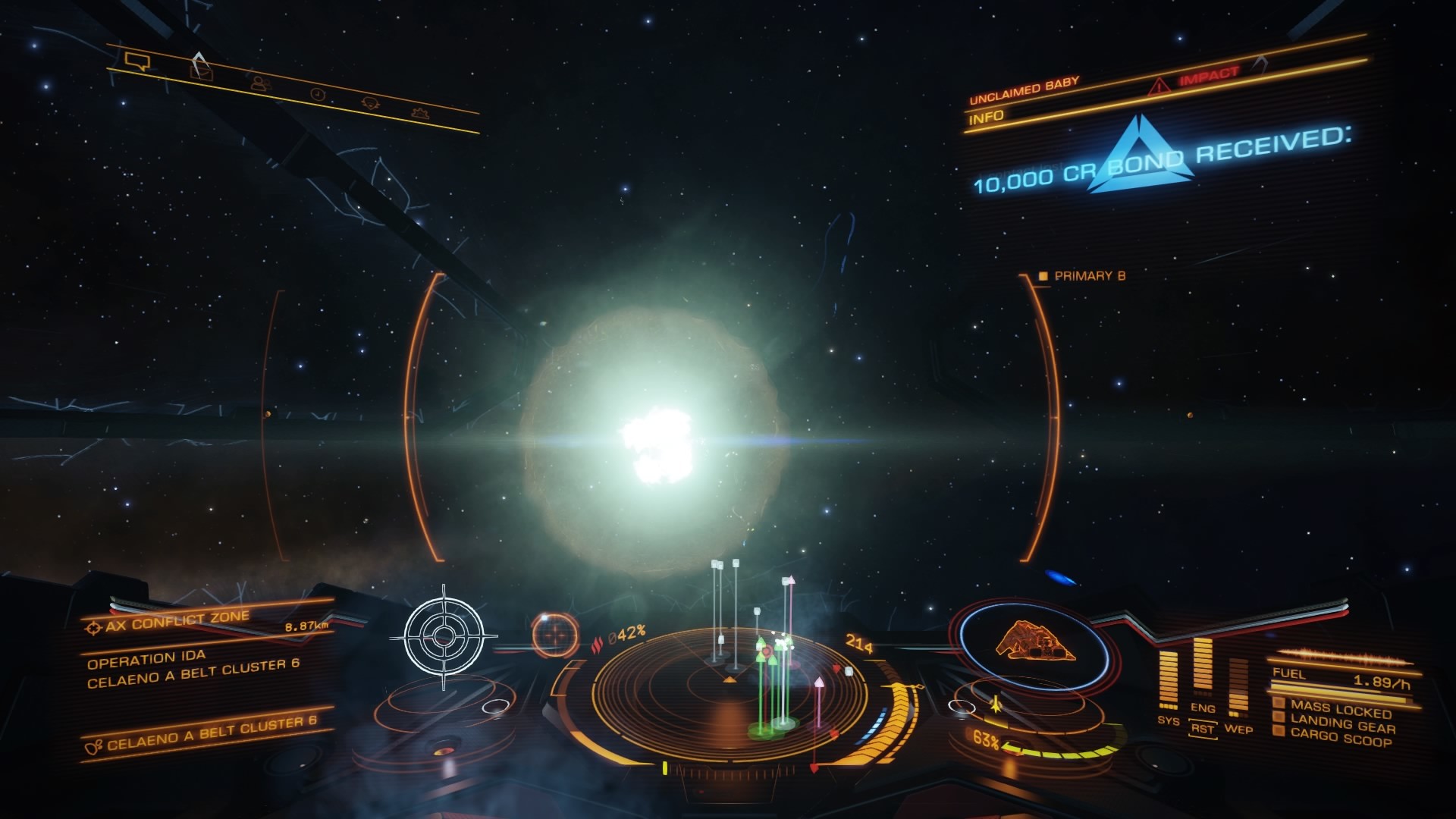 Then we see an interceptor appear on the scene. I’m not sure which type, since I don’t have the xeno-scanner fitted – not that I would get close enough anyway. But judging by the numbers in the swarm it could be a Medusa, or even a Hydra. I continue to fight scouts off, I feel I want to help take on the Interceptor but with my current set-up, I would be completely ineffective. I take out a few more scouts, but the corrosion damage is taking its toll. We’re then hit with a field shutdown and our ships go dead for what seems like ages.

Back online again and both Raven and I need to get out of there. The swarm starts to lock onto me though and bites into my hulls integrity, I can sense the Interceptor closing in on me also. Luckily I make it out though, a chance to repair and re-arm.

Raven insists on getting straight back in to the fight, but I urge her to return to the rescue ship with me for repairs. Within minutes though, we are fully repaired/rearmed and straight back into the action once again. Over the next few hours we continue to battle it out against the never-ending wave of scouts, returning briefly to the rescue ship for repairs now and then. After four hours we’re both exhausted and we are pretty much ordered to park up and rest, while new commanders take our place.

There is a strong desire to get back out there from both Raven and myself, but we have to be sensible, paced. Rest and repairs are important - I think we're in for the long haul on this one..
Do you like it?
15
Shiny!