Digging in the dust

I always seem to feel the need to generate some more money after a large spending binge on expensive ships and upgrades, I don’t really need to, but want the extra security I guess. That strange human need that hasn’t seemed to have left us over the centuries. I have a wait of a week or so before returning to the Pleiades anyway, so what better way to pass the time.

I quite like the occasional mining stint. It’s a nice break from running around so much, chasing and being chased. It gives me a bit of thinking time, time to plan ahead, to dream or reflect upon what I have done and where I’ve been.

I’ve kitted out the Cutter with the necessary mining equipment, but also a few offensive weapons to ward off any desperate hopefuls. Then its off to a nice double painite spot in a ring in the HIP 21991 system. Shortly before dropping into the ring, I realise that I have to go over to the nearby station to pick up the limpets that I forgot to buy. I get distracted by something, leave the station, make my way out to the ring, then return to the same station a second time as I forget to buy the limpets once again (buy limpets.. buy limpets… buy limpets… buy limpets..)

I scan the inner ring and find the right spot, then its time to settle down for a few hours mining. Painite? Low temperature diamonds? Void opals? Something else? There are a few high value options to consider when mining, Painite is easier – no setting of explosives to blast open asteroids, or long searches for the right rocks in the first place, but the value is less per tonne. So all things considered, theres not a lot in it, its down to the miners preference and the changing mineral values. For the moment, I’m going with painite.

There have been some drastic changes to the mineral prices recently though, affecting all of the more valuable minerals. I used to get 800k or more per tonne of painite, but now the price has dropped to around 400k per tonne. Opals and LTD seem also to have been affected. I wonder what caused this? Maybe a large sell off, or drop in demand? I’m counting on some sort of recovery soon, but not banking on much more than 400-500k per tonne.

The double painite spot in the HIP 21991 system turns out to be a good one, most of the asteroids have painite in them. I send out the prospector limpets two at a time, ignoring any with less than 15% painite. I dispatch the team of limpet collectors and set to work surface mining almost immediately, with my limpets ignoring anything other than painite. The asteroids all seem to have about the same number of fragments that peel off one by one, but the higher the painite purity, the fewer fragments needed for a tonne to be refined. A nice juicy 50% painite rock will yield one tonne for every 2 fragments, but a 10% painite rock will only give you a tonne after 10 fragments are collected. 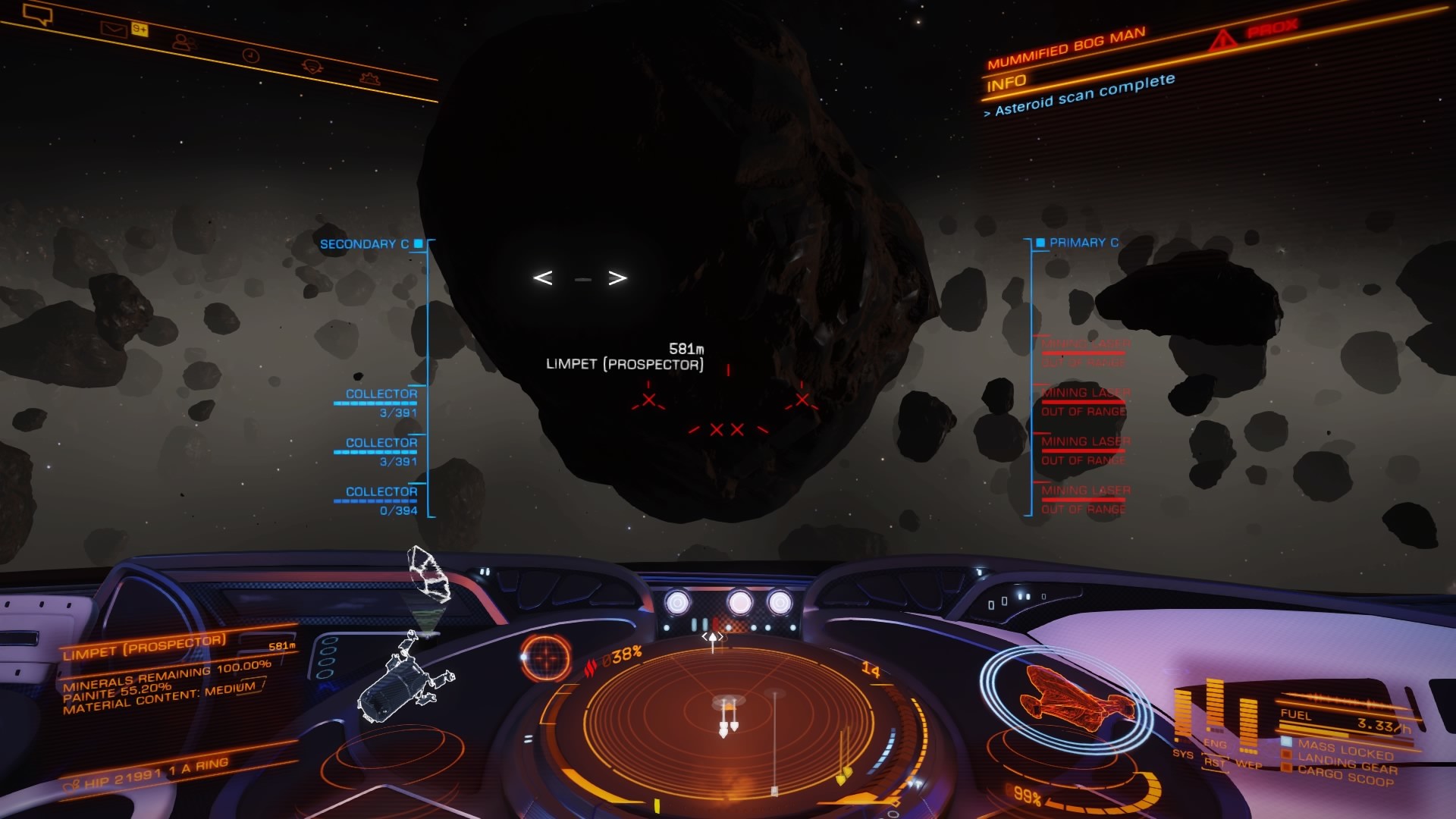 After a while, I have almost filled the cargo hold. But my options to sell nearby with a large ship are limited. Do I hang about and wait, or sell? I decide to make the sell some 10 jumps away and get about 350k per tonne.