I haven't found Danna under a rock, but close. It was in a rock nevertheless, and a fairly remote one. She was there for a reason after a life of hardship and heartbreak. We share some motivations. Both look for the void as the answer to our troubles and both find solace in brothers in arms.

When she joined my crew, back at Morgan's Rock, I just promised her a journey without a destination. That was enough for her to say yes, even before we discussed her wages or commission.

Back in the bubble and while The Bridger is getting ready for the next trip to the black, I thought it would be good to bring her back to a happy place of her past before we move forward in such uncertain terms.

Her stories are usually grim and lacking the spark, however, her eyes brighten when she mentions Kaushpoos.

Back in 3301 the Explorer's Association has called in the independent pilots to help on its effort to build a state of the art Ocellus starport at Kaushpoos and later relocating it to the Pleiades. The call was made to miners to bring in Palladium to Neville Horizons and for a security detail to enlist privateers. Danna was one of them, fighting off pirates that targeted the mining convoy. Her stories of bravery and close calls with death are awe-inspiring and you can get a glimpse of how crazy this pilot can be. You couldn't tell by her usual Easter-Island-statue look.

Now, Obsidian orbital, the Ocellus starport sits proudly on the Pleiades nebula and she was part of it. So we went back to Kaushpoos to catch some pirates for her good old times' sake. Nothing like fresh bounties to sheer you up. We had great fun at it, but tomorrow we head out and as soon as the ship is ready, so are we.
Do you like it?
0
Shiny! 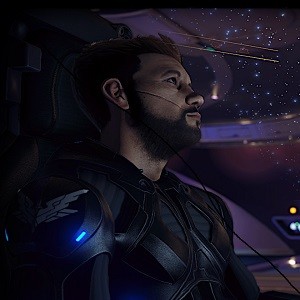