A JACK OF ALL TRADES

A JACK OF ALL TRADES

Yes. I think the Deimos is ready.

This is Jav Marlo, on board the Deimos, landed at Hamilton Gateway in system Wolf 406.

I am recording this log to register the modifications I have made to the Scourge, the Python I got during the rescue of the Sunflex pilots, and how I have made a great multirole ship of it. Or at least that is what I think. 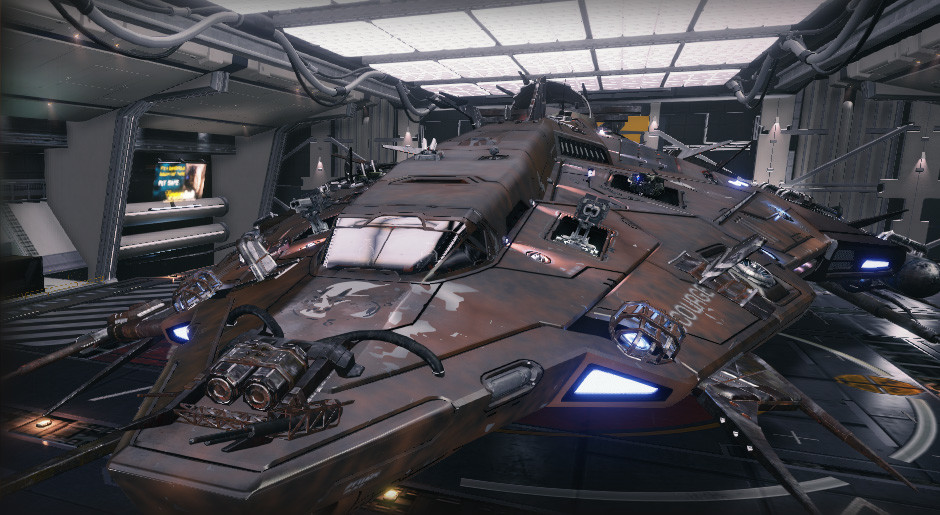 I must confess I was very impressed by the Scourge performance and high fire power during my combat with the pirates of the Black Gang. It managed to survive the combined attack of two Anacondas even with the poor upgrades I was able to made and its battered and corroded hull. And then was when an idea arose. I have been confining most of my operations to the surroundings of the Wolf 406 system due to the fact that my increasing flotilla is parked there. I mostly own transport and combat ships, besides my beloved Cobra. But I did not own any ship capable of bounty hunting and big hauling at the same time. The kind of ship that can land in an outpost and carry out most missions that are offered. I think my newly acquired Python can be this ship. The perfect Jack of all trades.

So, here is a list of all the modifications I have performed. First of all, I got rid of the old corroded light hull and installed a state of the art reactive surface composite. I removed the old fins, spikes and redundant systems and added some new ones. The final touch was a lay of black paint with a green stripe. A small Alliance touch. I had to find too a new name for the Scourge. Given the hideous past of the ship, I thought something with an ominous sound was in order. So I decided for Deimos, the mythological old Greek personification of terror. 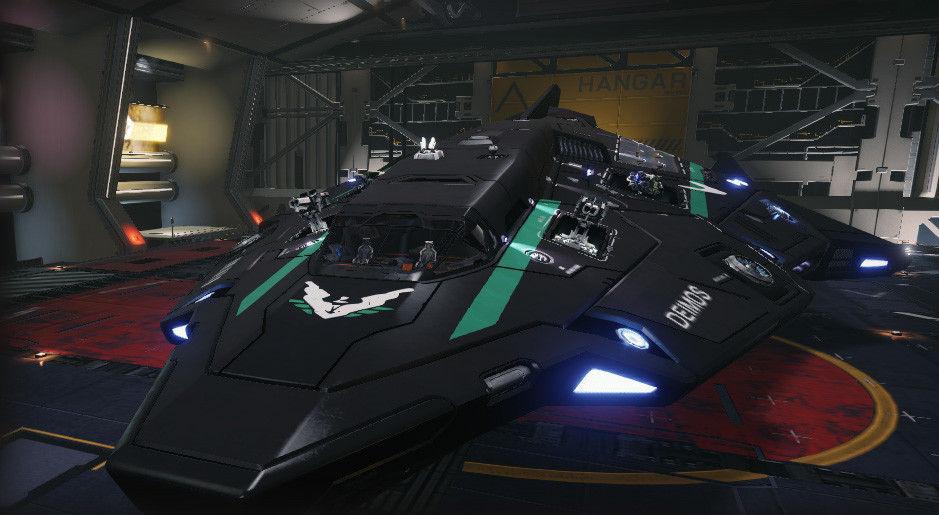 It was the time to tune up the weapons of the Deimos. The main setback of the Python is its sluggish maneuverability. A couple of medium beam turrets will help me deal with nimbler ships. The great hardpoint placement helps counteract the poor turning velocity. In order to deal with the bigger fishes, three grand fragment cannons will shred their shields and hulls. I visited Zacariah Nemo and his cyber friends, and he engineered my frags to the max. Now I can double shot incendiary rounds and corrosive shells that can rip apart a small ship in an instant and cause serious damage to a big one. Before leaving, Zacariah insisted that I should use cyber-implants in my eyes in order to improve my accuracy and get the maximum profit from his weapons. I declined his offer.

As for the core systems. A quick visit to Hera Tani at the Jet’s hole allowed me to improve the output of my power plant and its resilience at the same time. There is something about Hera that makes me uncomfortable. I always try to expend the less time possible at her base. 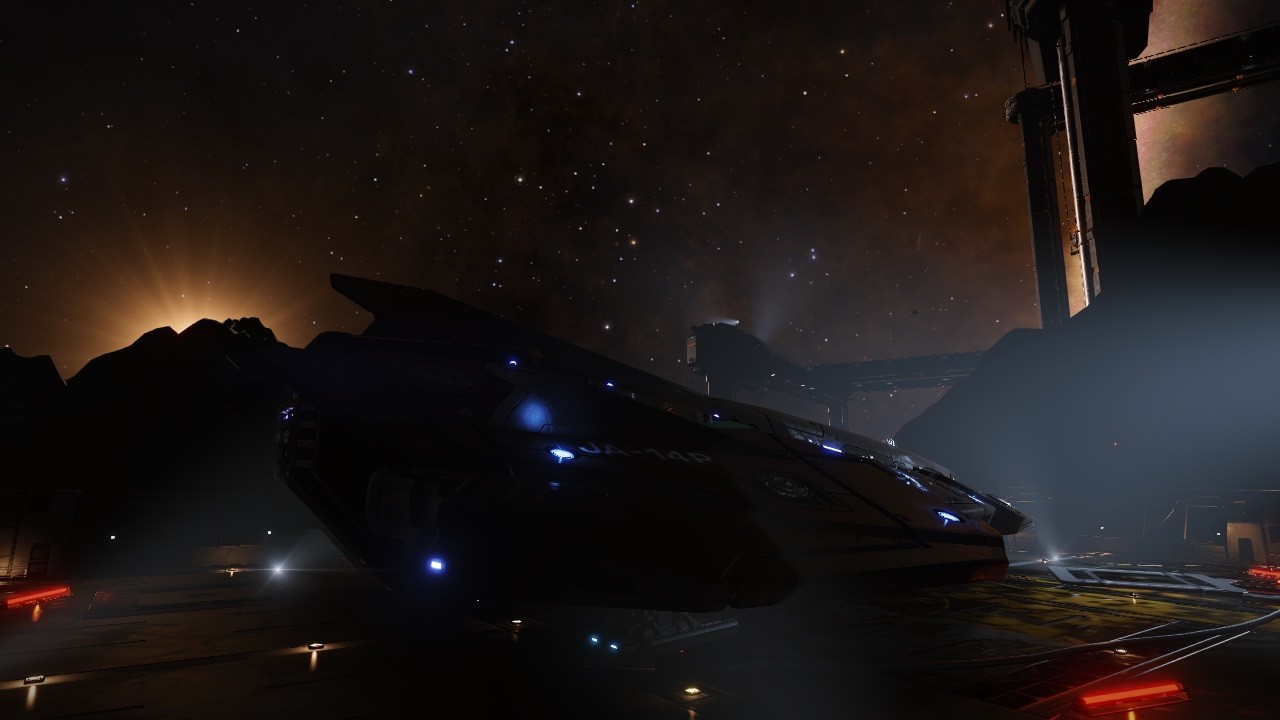 The Deimos landed at the Jet’s Hole (Kuwemaki)

I concluded my tour around the underworld circles visiting the Dweller, who increased the charging velocity of my power distributor way beyond its specifications. 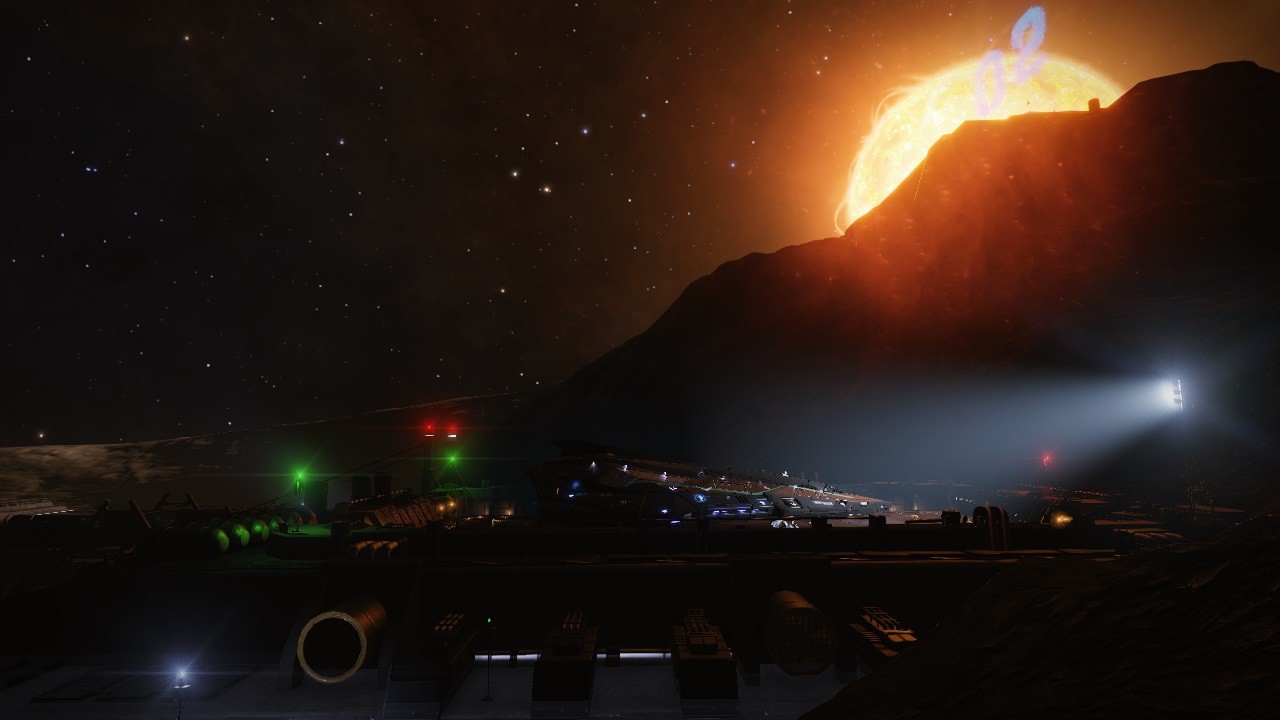 The Deimos landed at the Black Hide (Wyrd)

Regarding the internals. I removed the cages for prisoners and the torture room and gained a lot of space. After installing a proper system for dealing with the canisters I ended with a big cargo bay capable of hauling 128 tonnes of merchandise. I upgraded the collector limpet controller but found it very heavy, so I pay a visit to an engineer I had not contacted before. He goes only by the name of the Sarge, and he do not hide that he is a veteran form the Federal Navy. He also worked for the drone division of Core Dynamics, and is a magician tinkering with limpet controllers. He managed to reduce the mass of my system by an 85 percent just removing redundant circuits and safety systems. He only asks for the scanning data of combat ships in exchange for his services. 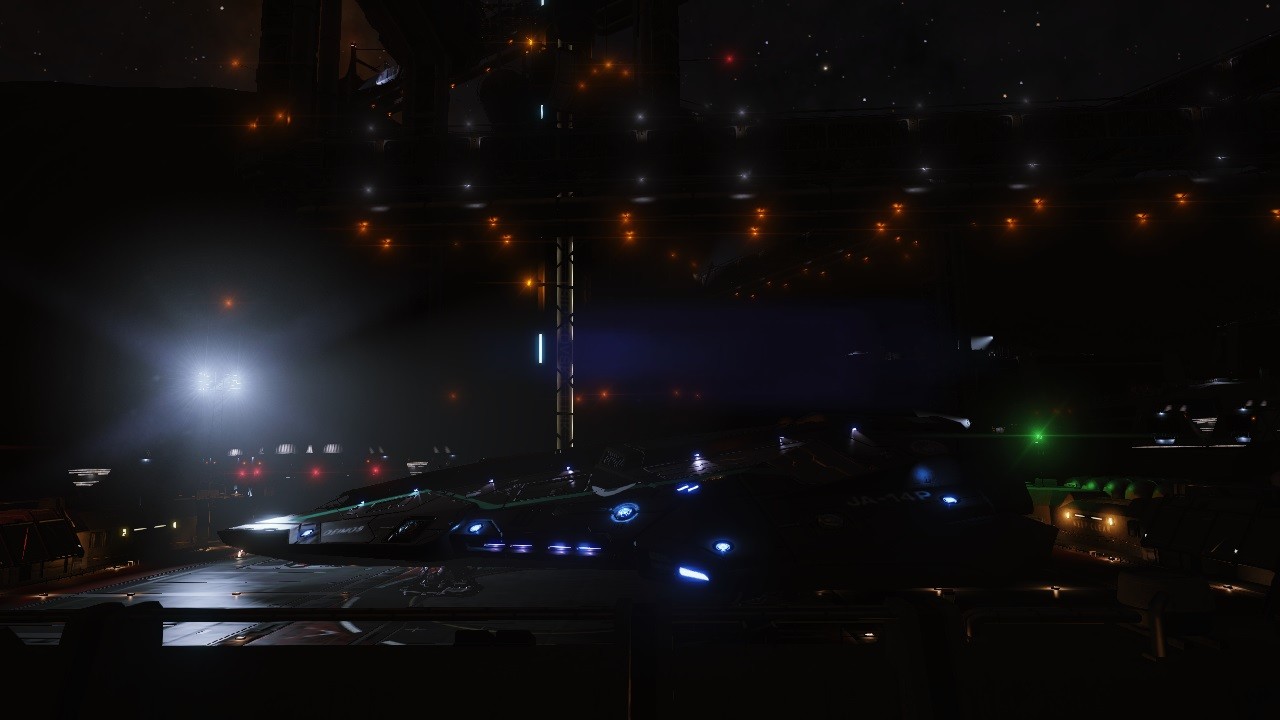 The Deimos landed at the Beach (Beta-3 Tucani)

Didi Vatermann, the shield expert and Lavian Brandy lover of Leesti, helped me with the final pushes to the shields and boosters. Together we found a perfect combination for fast charging shields with enhanced resistances. 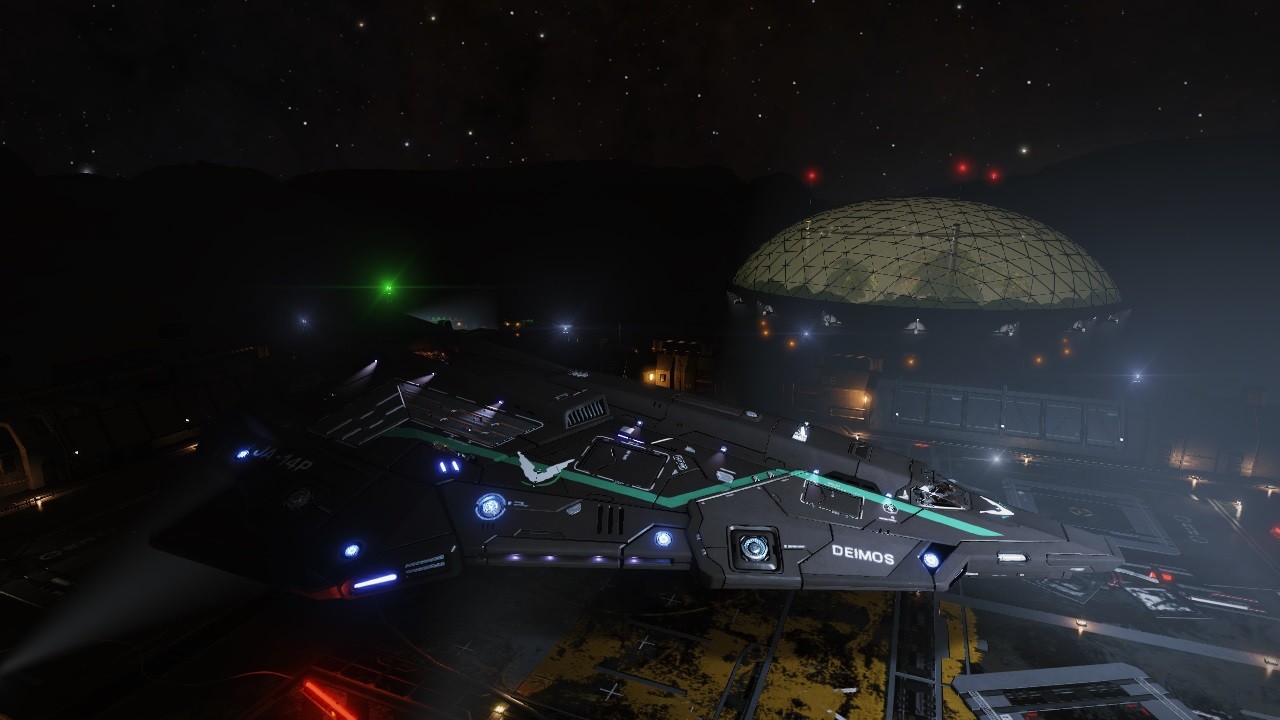 My tuning up project ended with a visit to professor Palin at his new headquarters in Abel Laboratory. He squeezed all the raw power possible from the thrusters in order to provide the Deimos with a reasonable combat speed, its Achilles’ heel. 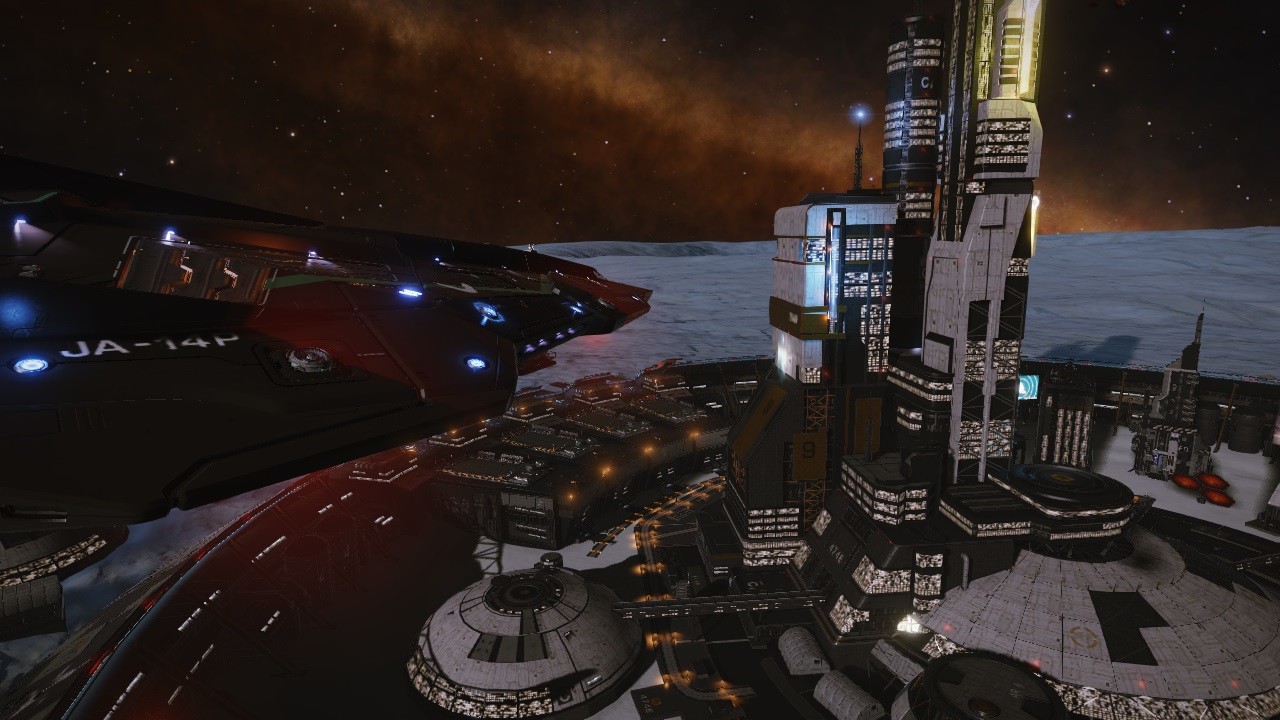 The rest of the modifications consisted majorly in making lighter systems like the sensors or the life support. Modifications that I have learnt to perform on my own.

The final results are amazing. The performance data I get from the workbench is way beyond my expectations. The Deimos is my most powerful ship so far. And the most expensive too. Let’s see if it is up to the task.

Meanwhile, the news about a blight affecting crops all over the Bubble threatens to reduce the availability of foodstuffs in multiple systems. The fear to starvation has caused civil unrest. Independent pilots have been called to help. Pirates and terrorists are coming to the smell of the blood too. I guess there are many systems where the Deimos could mark a difference. There are plenty of Alliance systems that could use some push too. Mmmnnn! There is one going through elections right now. A small corporate system with low security and an economy of extraction. The only station to land there is a tiny outpost. A ship like the Deimos operating there could have a significant impact. Let’s find out. 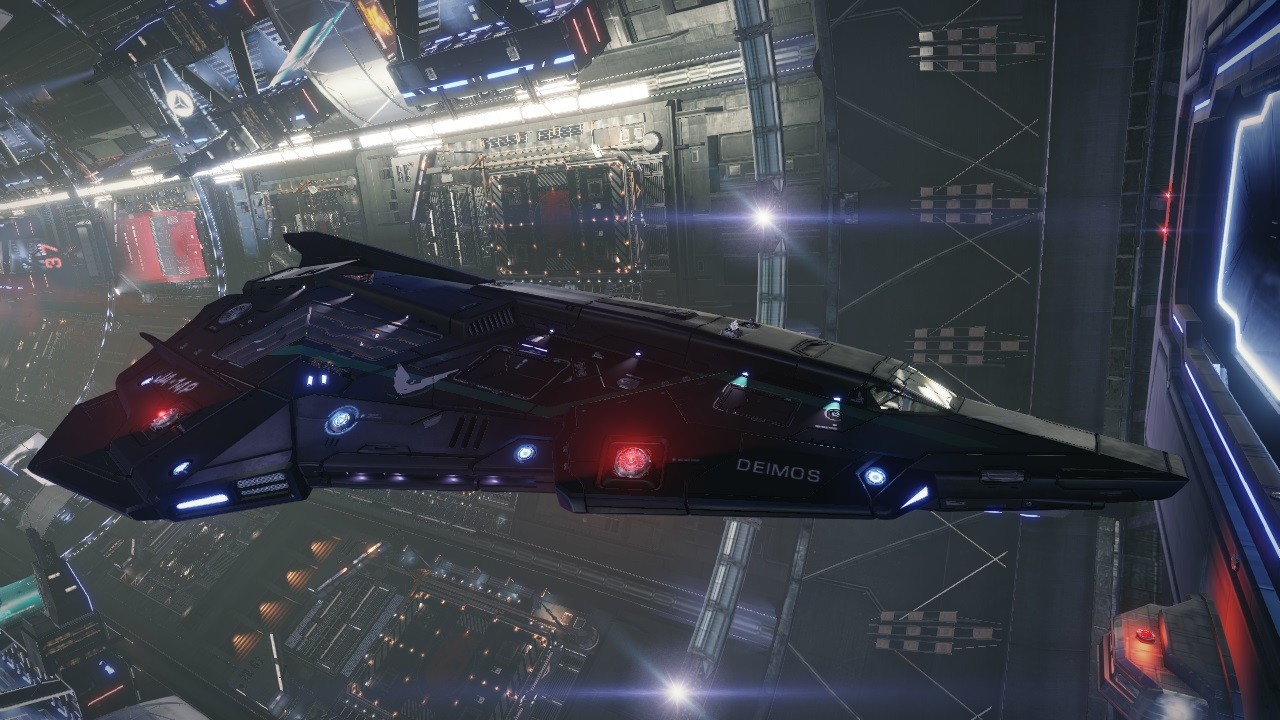 The Deimos leaving Hamilton Gateway (Wolf 406)
Do you like it?
5
Shiny!