This is Jav Marlo, on board the Orion, landed on HD 63154 B3a, among the alien ruins of a Guardian installation.

She was right. The ancient ruins were exactly where she said. Now, let’s see if she can extract that FSD booster technology she claimed it could be obtained here. But for that we will have to wait. It is pitch black out there. I am not letting her to explore these ruins in the dark. There is something on this place that gives me the creeps. We should better wait for the daylight. And, besides, she does not know, but I am waiting for reinforcements. 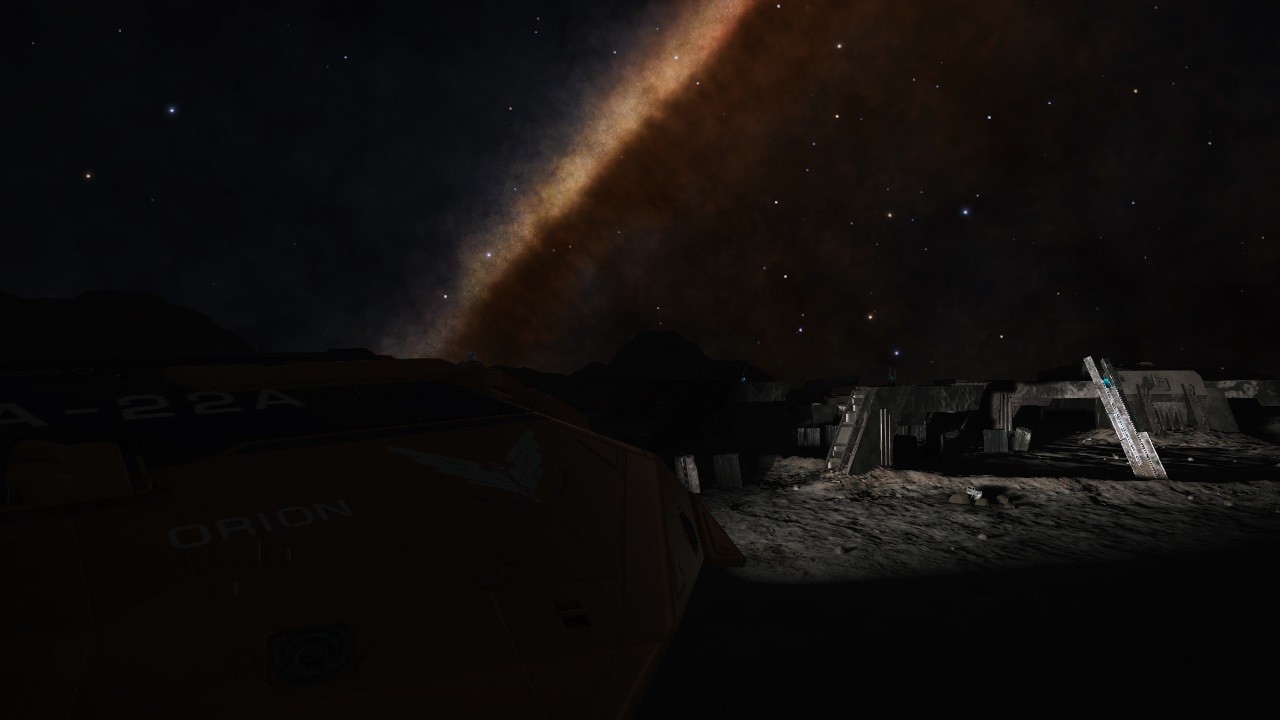 The Orion landed at the Guardian Ruins of HD 63154 B3a

I cannot believe that just ten days after I got rid of her, I let her get into my ship again. Specially after what I saw she was capable of doing. But her offer was too good to ignore.

Two days ago I was working in one of the hangars of Hamilton Gateway in my new ship, an ASP Explorer that I bought in Beagle 2 Landing, in Asellus Primus system, the same place where my father left me before embarking in his last exploration mission. The one from he did not come back. Since my father disappeared in the Merope system, I thought that Orion would be a very suitable name for my new vessel. 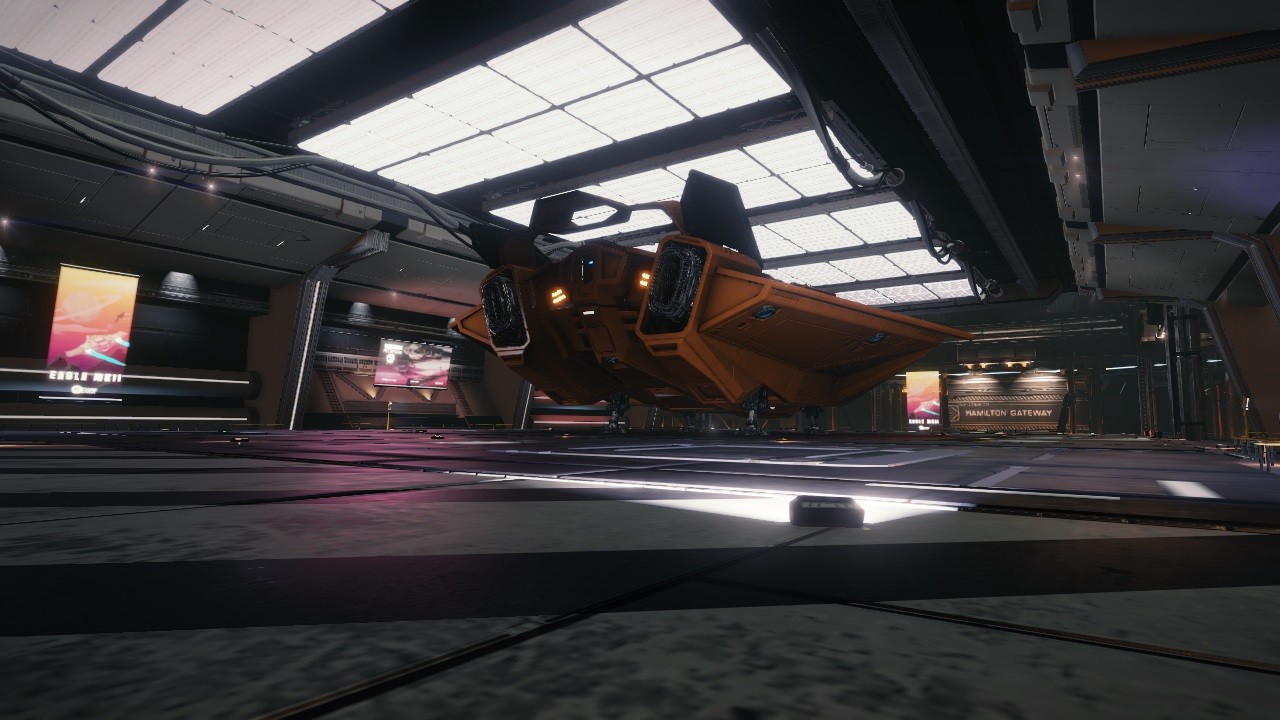 The Orion in a hangar of Hamilton Gateway (Wolf 406)

I guess she had been following me. My mysterious passenger, as I liked to call her, had been wandering around the docks for the last days, keeping track on me. Well, dock security is a serious issue in space stations, ask illegal trespassers for the matter, the galactic commerce depends on that, and nobody likes wanderers around their private hired hangars when working. When the trespasser alarm sounded I run to grab my pistol. When I arrived to the door of the hangar, she had already beaten three guards that were laying at her feet unconscious. I leaned my gun to the back of her head and pushed while screaming her to freeze. The moment she felt the cold cannon of my gun on her nape, she did a lightning fast twist kicking my ankles and unbalancing me. I falled backwards to the floor and when I was able to aim to her again with my gun she had the point of a long thin knife against my throat. I have never seen anybody moving so fast in my life. Lucky for me, two more security guards had come and where aiming at her, this time from a distance, with their plasma rifles. I do not know why, but I told the guards that she was with me and that all the mess has been a misunderstanding; that she was a passenger that has misplaced her access code to the hangar. I had to pay a fine of 200 credits for the mess. But they checked my credentials and that she came to Hamilton Gateway on one of my ships and let us loose.

Of course, she did not payed the fine, but said she would compensate me. I told her that I did not denounce her on respect to the Allied Order of Exemplars, but I wanted to know why she was following me. That is when she came with her offer. She had seen me engineering the Orion for deep exploration, and she said that she knew how I could dramatically increase its jump range using alien technology. 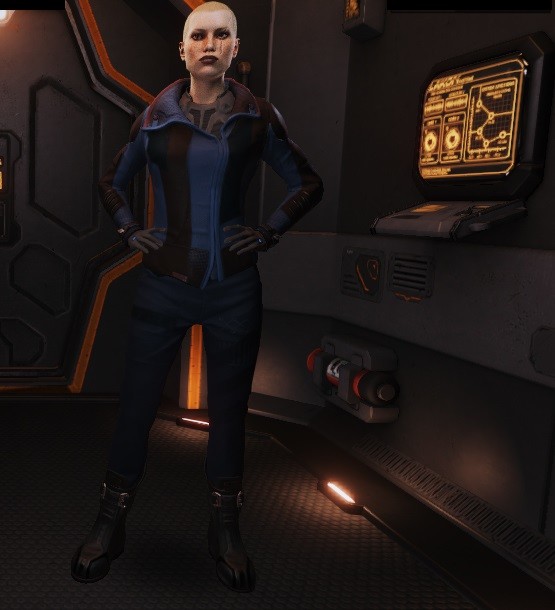 The mysterious passenger on board the Orion

According to the GalNet, the Guardians were an alien humanoid species that became extinct two million years ago. Their Ancient Ruins were first discovered in the Synuefe XR-H D11-102 system on October 27 3302 by Commander XDeath. The mayor galactic expert in the Guardians is the engineer Ram Tah. In the last three years many Guardian ruins have been discovered. I even landed in one of them during Distant Worlds 2. And many commanders have been taking advantage of hybrid Human-Guardian technologies. It seems that the Guardians were at war with the Thargoids millions of years ago, and their weapons are especially effective against them. Alien technology brokers can be found now in some space stations of the Bubble. They deal with Guardian technologies to increase the performance of ships beyond common engineering. I have seen ships with ridiculous jump ranges during my trip to Beagle Point. But getting one’s hands into one of these technologies is not easy. The tech brokers take their toll. They request for special alien components and schematics for their services. And, in order to get those, it is necessary to find a special kind of structure in the Guardian ruins and be able to hack it. And I do not know how to do that. But my mysterious passenger does, or that is what she says. 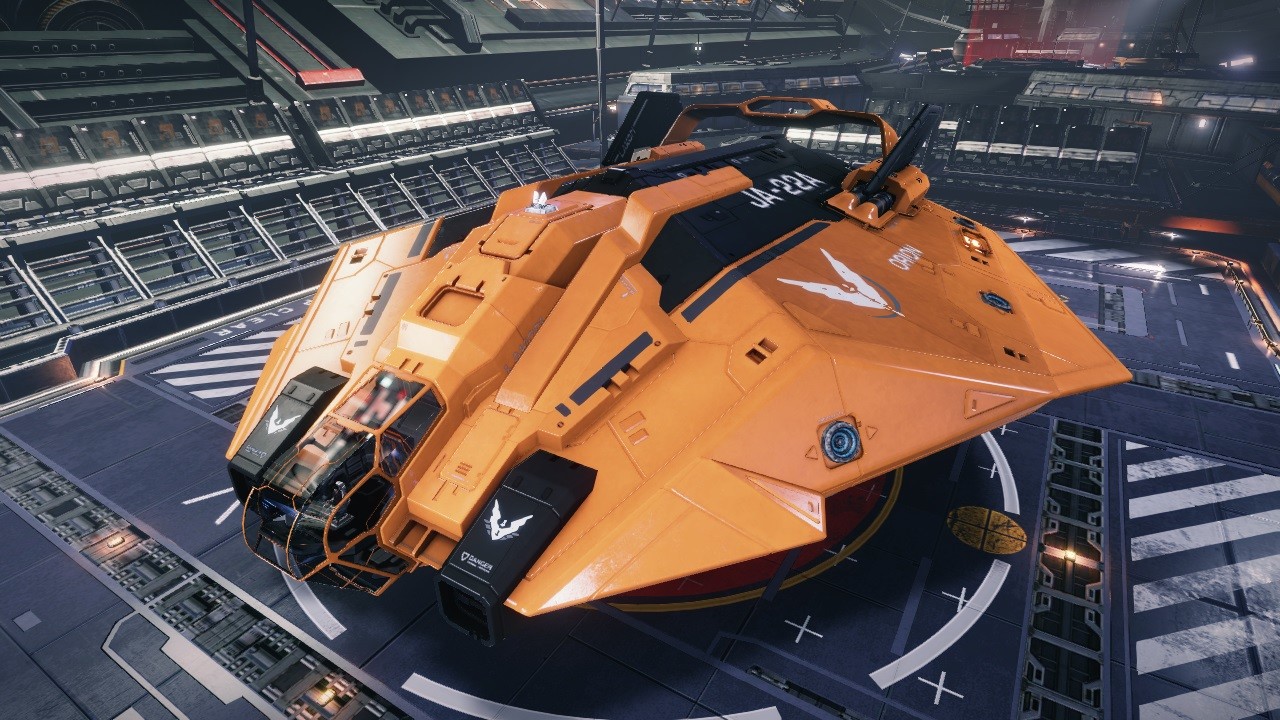 The Orion about to depart Hamilton Gateway

So there we went. To the black again. In search of the Guardian ruins that keep the secrets of the FSD booster. On this occasion, being my partner and not only a passenger, she gave a name to call her, Ayumi, that I presume false, of course. 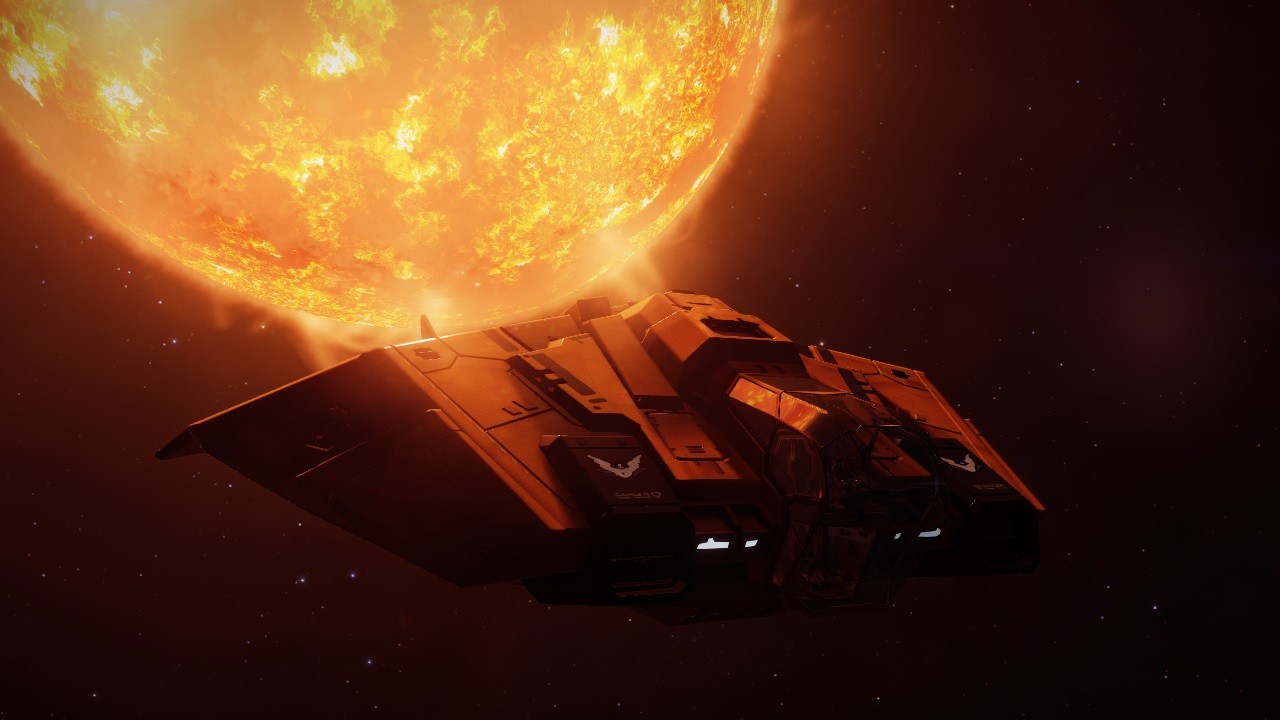 The Orion fuel scooping on its way to the Guardian Ruins

The trip went without incident. Ayumi still remained laconic in the little interactions we had. And the Orion proved it to be a true explorer ship. I can tell the difference with my beloved Hyperion. The jump range is a little bite lesser, for the moment, but thanks to its big fuel scoop, the most expensive piece of equipment of the ship, it can refuel from a star as its fly by, without decelerating, thus allowing to travel much faster. And thanks to its engineered power plant, it does not overheat at all. Moreover, it has bigger crew quarters, fit for long range exploration. It is clear that the Diamondback Explorer was designed for medium range trips. I still wonder myself how I managed to not get crazy on the way back from Beagle Point. 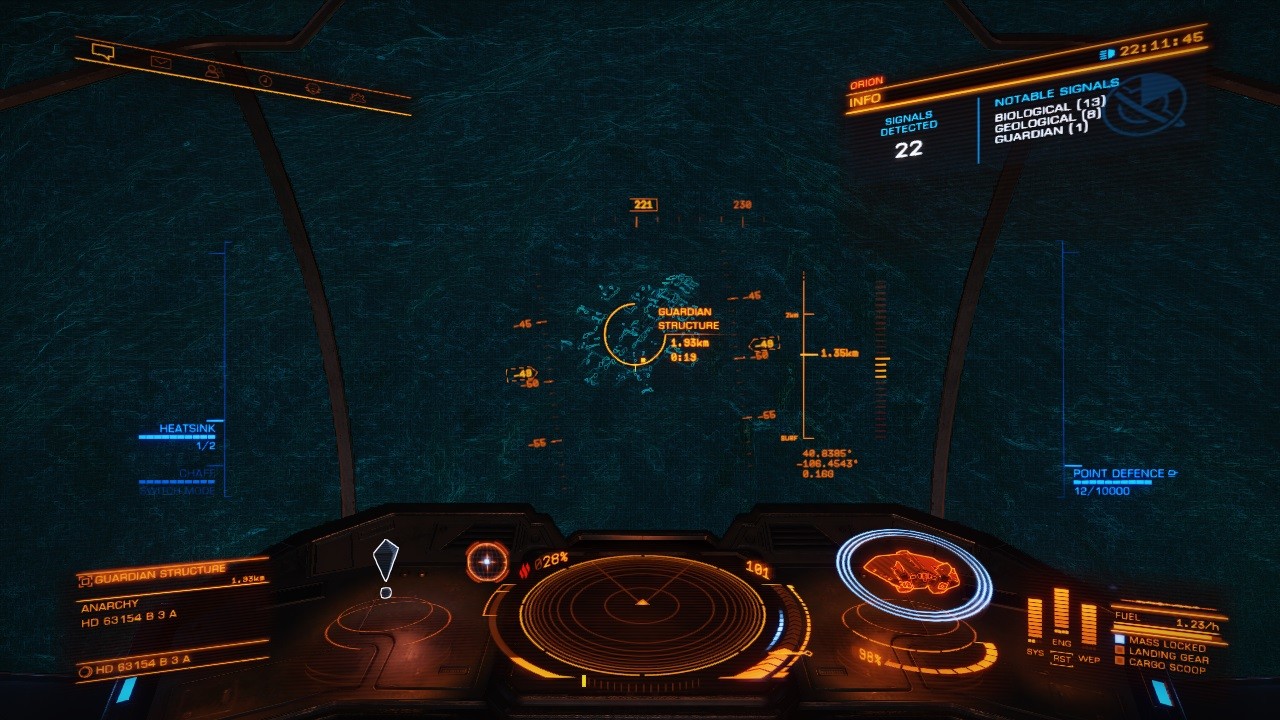 The Orion approaching the Guardian Ruins in HD 63154 B3a

In less than 24 hours we arrived to system HD 63154, and that was without neutron star boosting. At this pace, I could reach the Zurara in ten days. There is quite a distance from the entry point to the second star, where the planet with the ruins orbit. I could tell from space that these ruins are not like the ones I saw during Distant Worlds 2. From above they looked like a complex or installation of some sort. Not just a collection of obelisks. I saw a clear in one of the sides of the structure and landed there. 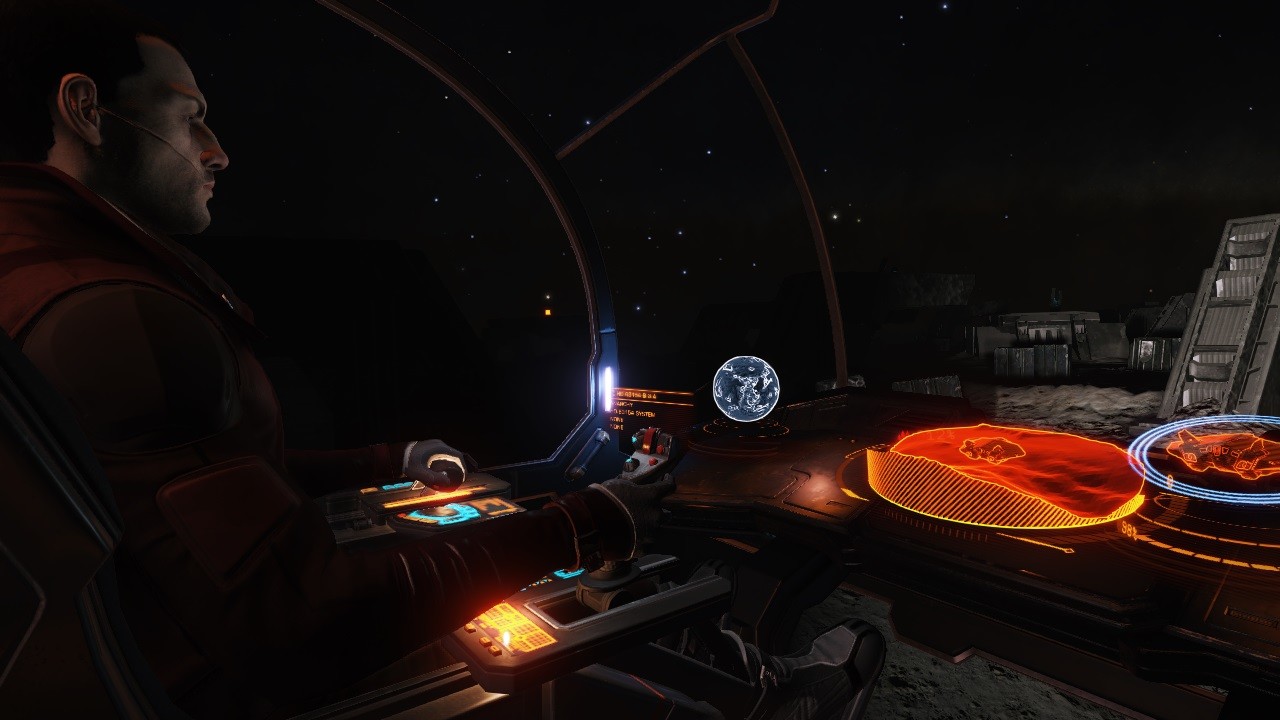 Jav Marlo, on board the Orion, recording a log

Ayumi is eager to commence exploring the ruins, but I have told her that we will wait for the daylight. Besides, I cannot trust her and this will give time to the reinforcements to arrive. I am not crazy enough to come to an alien ruin with an artificially enhanced psycho girl without some backup.

There is something about this place that makes me very uncomfortable. I can see the gleaming blue lights in the pylons outside. They are still active. After millions of years. And the sounds on the surface scanner has a regular pattern, artificial. I would say that we have been probed when we landed. I think something has scanned us. 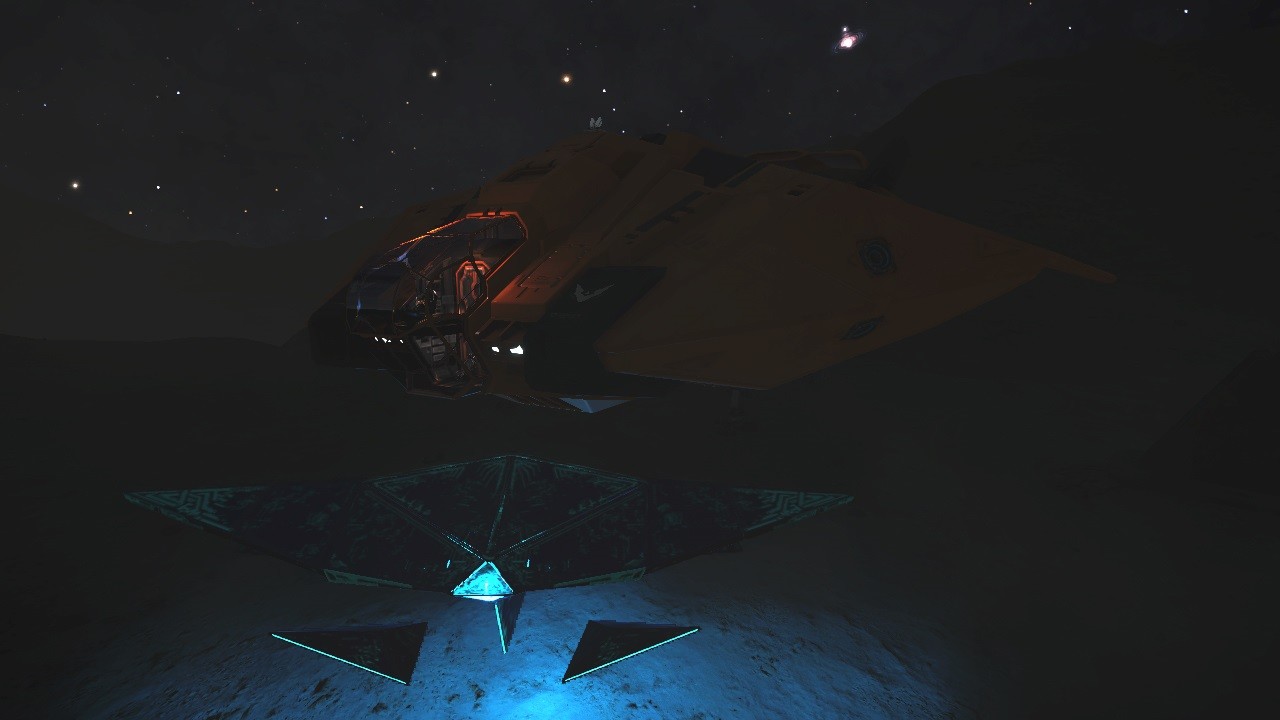 A Guardian Sentinel scanning the Orion in HD 63154 B3a

I better end this log and check what Ayumi is doing. I do not feel comfortable sleeping in my bunk in a place like this, so I am going to rest in the cockpit, so if something happens we can get out of here fast. I am blocking the access door too. I have seen what Ayumi can do, she is a lethal weapon and I do not know what her real plan. It is just a precaution. I better eat something, check the ship and be back fast. It is just a feeling, but I would say that something is lurking out there. 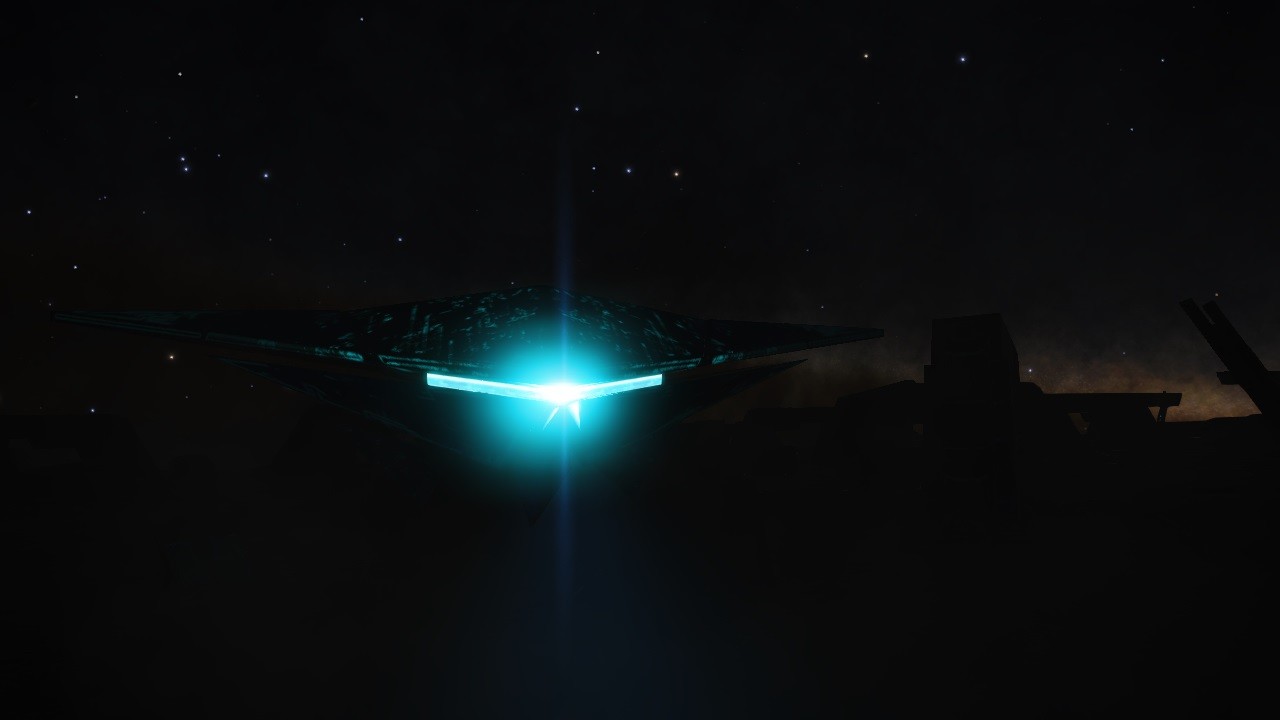