This is Jav Marlo, on board the Orion, landed at Hamilton Gateway in system Wolf 406. All systems checked. At last I am ready to depart. The Formidine Rift awaits me. Since I got my pilot license, it has been my intention to discover what happened to my father. He disappeared more than five years ago. His ship was found adrift in Merope. I blamed the Thargoids for that. Now, I am not so sure it was them. It was Bill Turner, the engineer, who put me on the track again when I was losing hope about finding out what happened to him. Turner told me that my father was on a cover operation for the Alliance following the track of a Generation Ship that had been secretly launched in 3270. That only could mean the Zurara. It had sense. The new frame shift drive technology made the mission possible five years ago. But many questions remain unanswered. I recently discover that my father was a Fed. Why was he working for the Alliance? Was he a double agent? Why is the Zurara so important? What is really her mystery? GalNet says that the ship’s logs painted a haunting picture, indicating that the crew sabotaged the vessel before killing themselves. Unofficial sources tell an even darker story. The Generation Ship was sought by the Children of Raxxla, and some say that even by Salome herself. Well, it seems that my father looked for it before. And, who knows, maybe he even found it. I need to find out. I have been studying the charts and the possible routes for an ASP with the jump range and navigation technology of the year 3000 for weeks. I have tinkered with every system of my ASP, the Orion, to push its capabilities to the very limit. It is time that I see the Zurara by myself. 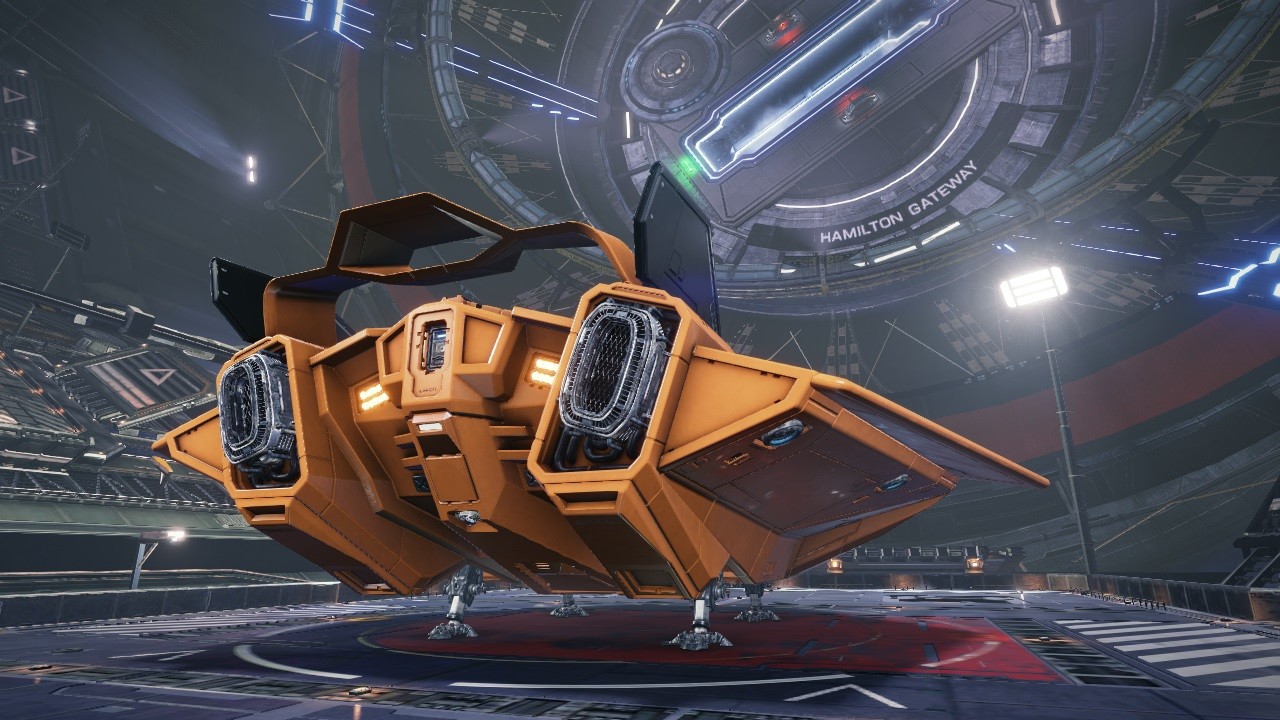 The Orion, ready to depart in Hamilton Gateway (Wolf 406)

There is only one loose end before I depart. Ayumi, my mysterious passenger, as I used to call her. I promised her one month ago that I would take her to Obsidian Orbital in Maia on my way to the southern regions and Amudsen’s Star. I lied to her about the true purpose of my mission. But I lost track of her the moment we arrive to Hamilton Gateway from our visit to the Guardian Ruins. It is like if she has just vanished. Well, I cannot say that I am going to miss her. There is something creep about her, but I admit that she did a great job acquiring the Guardian FSD Drive Booster. Anyhow, I cannot wait for her to appear anymore.

And you won’t have to.

What the hell. How did you get into my ship?

You authorized me, remember? Weeks ago.

But how…? It does not matter… Where have you been hiding? I did not hear from you in weeks.

That’s not your business. Shall we depart? I’ll be in my quarters.

Charming, as usual. As I was saying, all systems checked. Next stop, Obsidian Orbital. 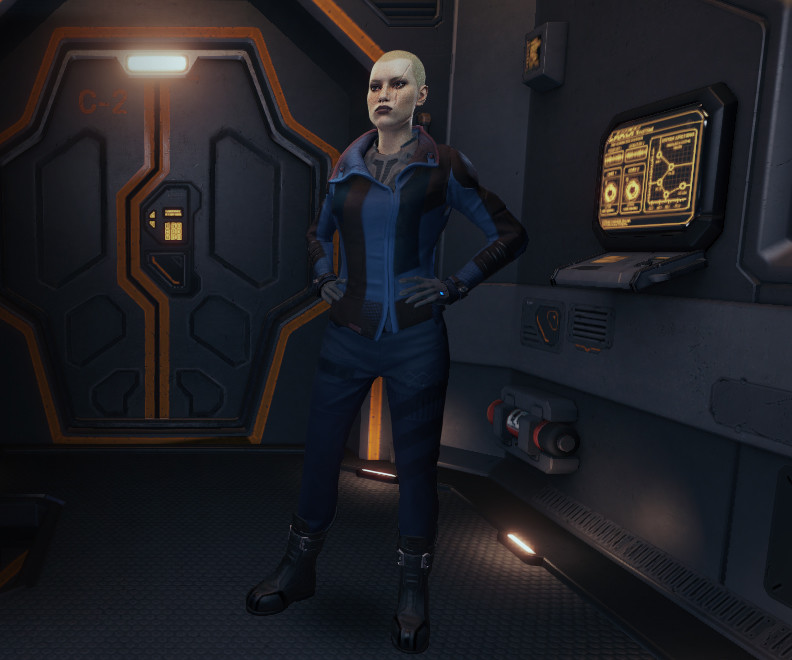 Ayumi onboard the Orion 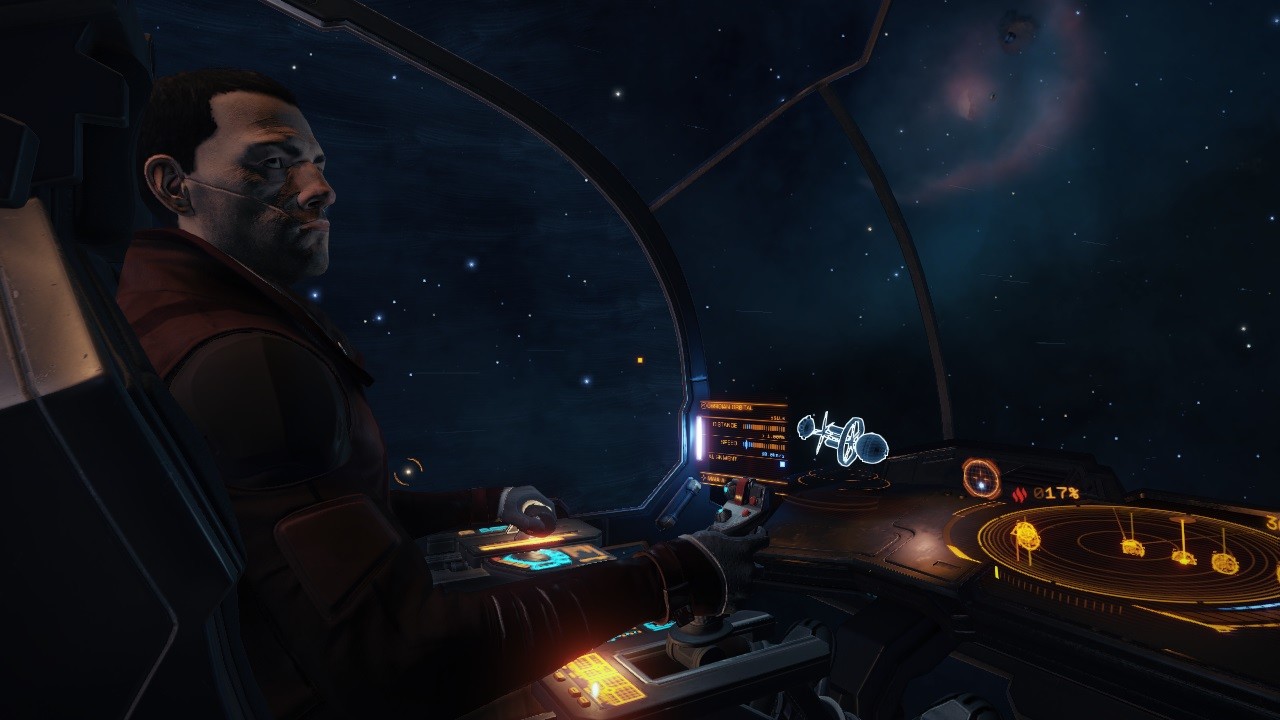 Jav Marlo on the cockpit of the Orion in Maia

Wait! A ship is approaching us directly from the main star. It probably saw us when we arrived to the system. It’s a Mamba. INTERDICTION DETECTED. How? Pirates? Here? What the…! 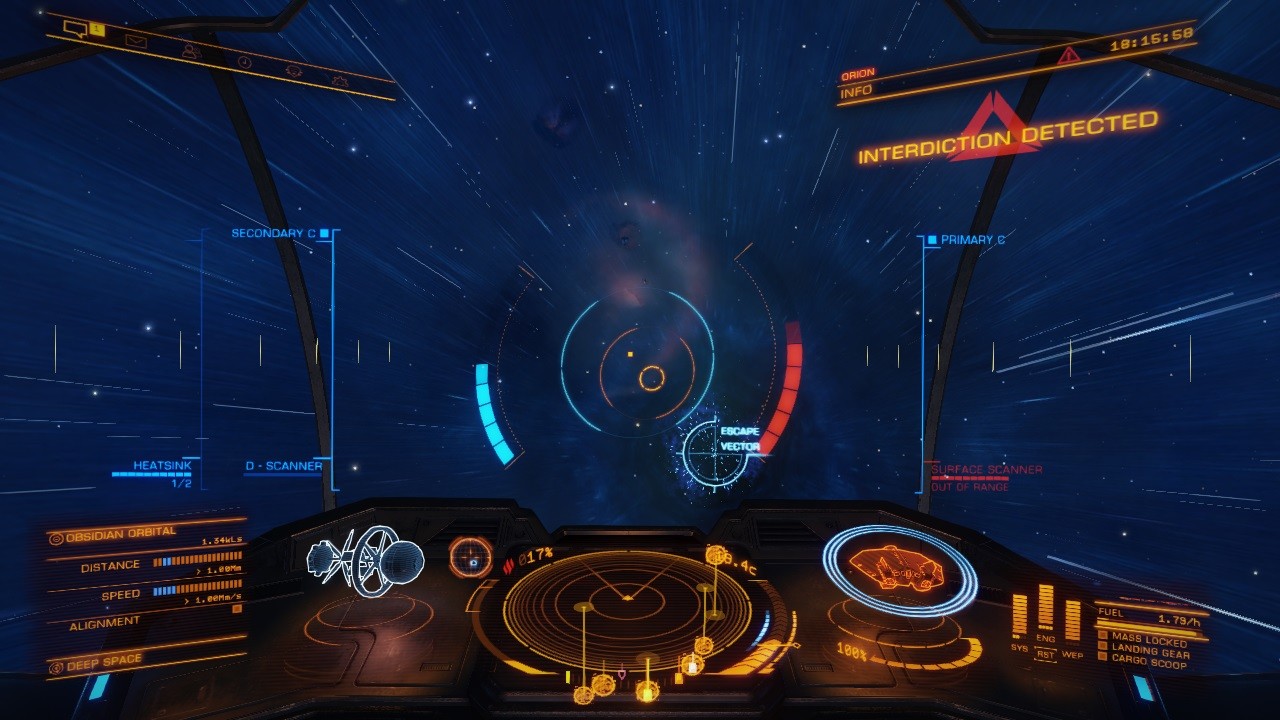 The Orion being interdicted in Maia

Damn! He got us. Where the hell is the Mamba? I cannot see it. 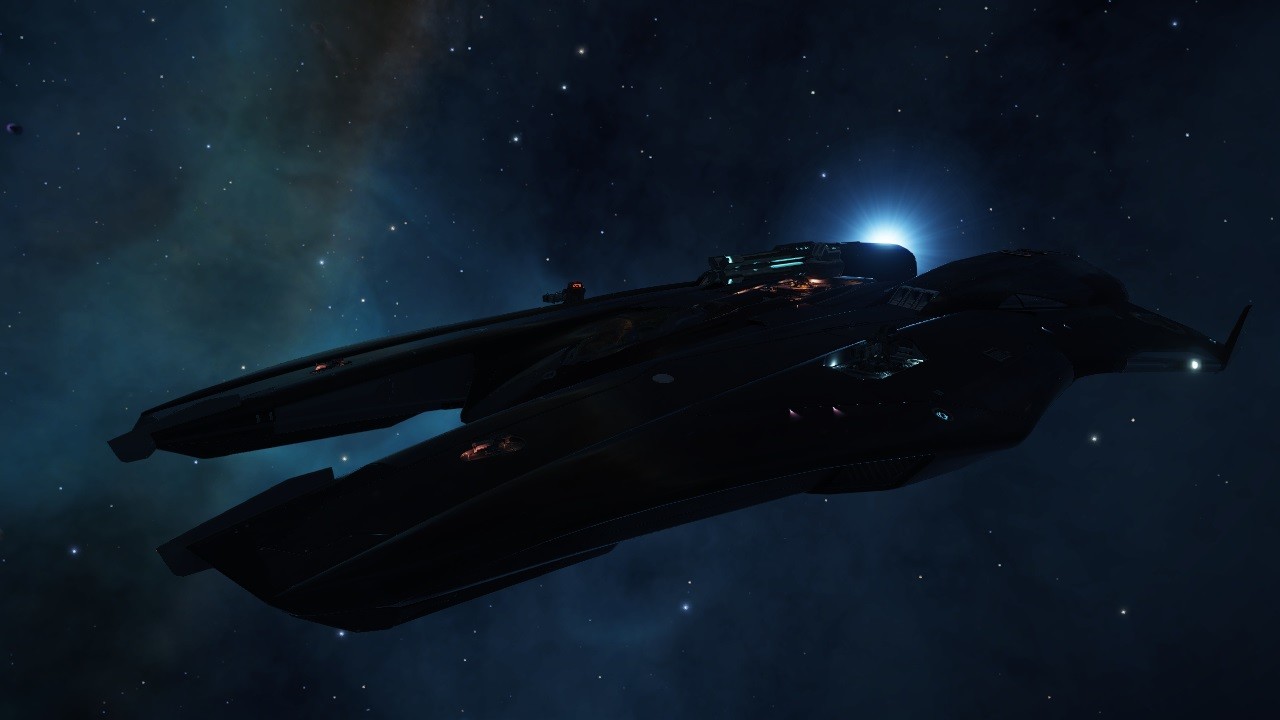 The Pirate Mamba approaching from the main star (Maia)

PORT SIDE! It's firing at us!

What the hell are you doing? Get back to your quarters!

No. I’ll take the lower cockpit. 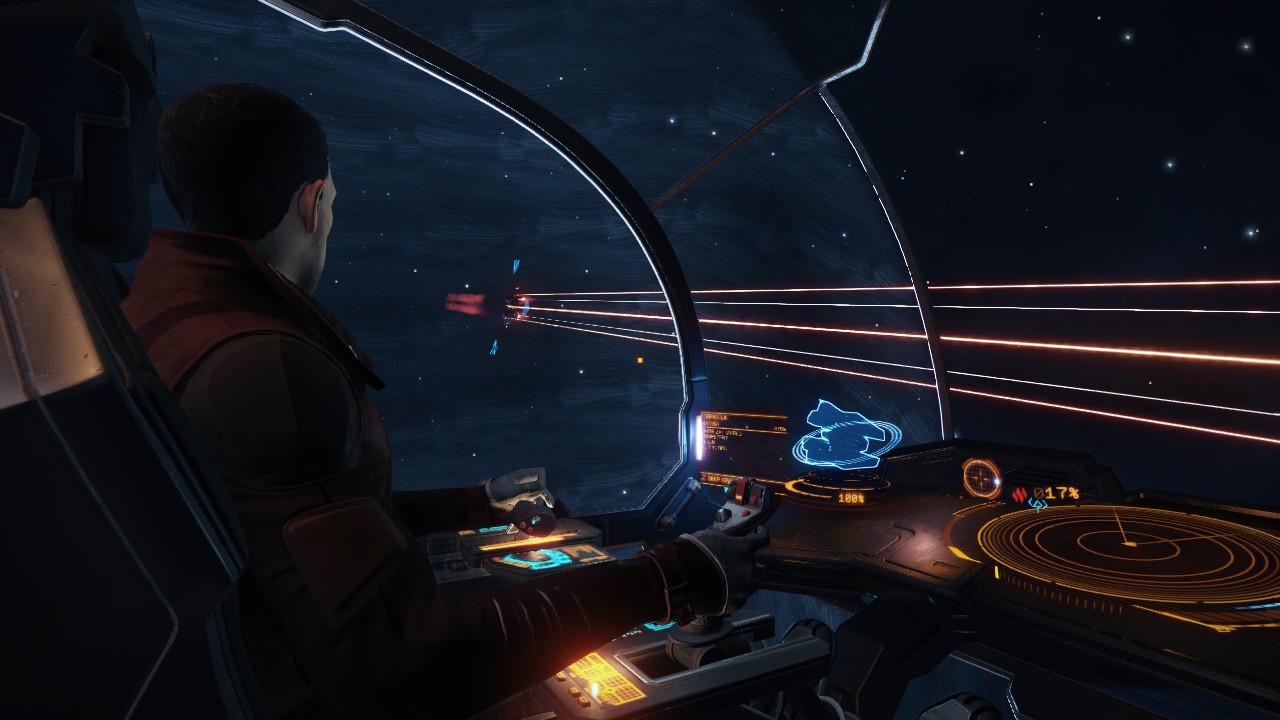 Jav Marlo onboard the Hyperion watching the Pirate Mamba attacking

To the Mamba attacking us. This is the Orion. Hold your fire. We pose no threat to you. We’re unarmed and have nothing in our cargo hold.

(Comms buzz) This is the Oblivion. Surrender your passenger! (Comms buzz)

My passenger! What do you mean? (Firing lasers)  Waow! 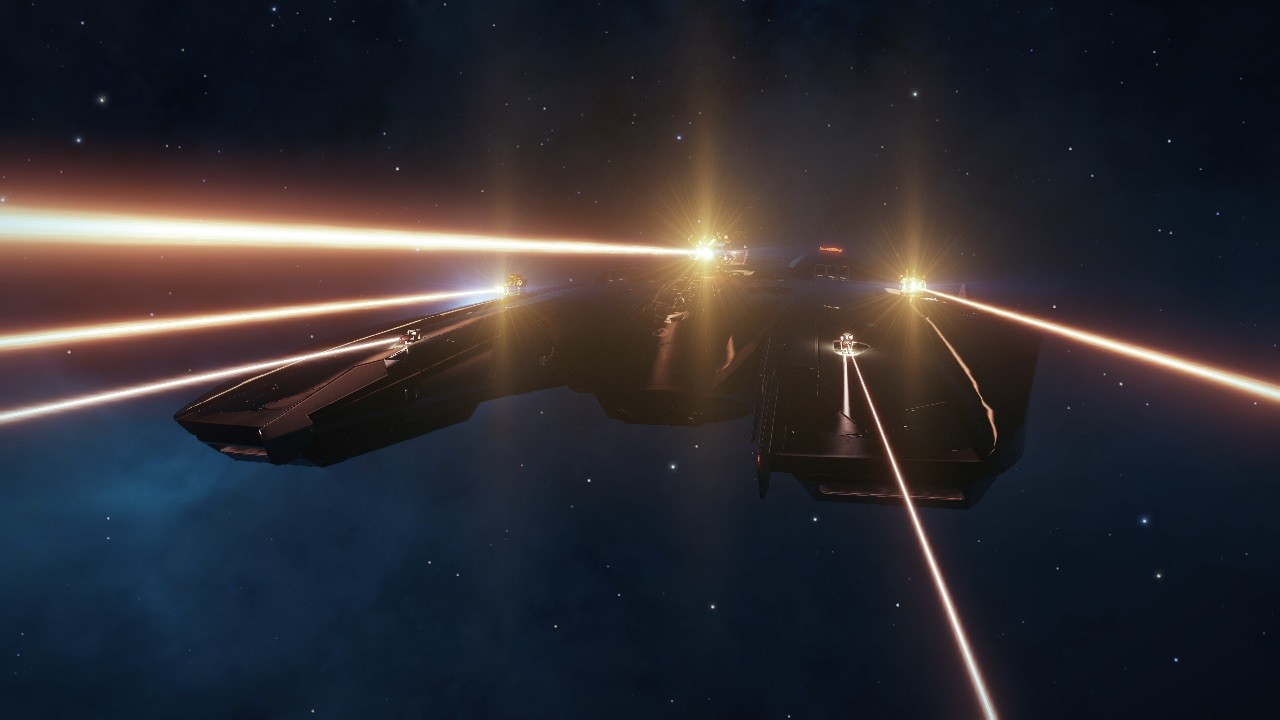 The girl? (Firing lasers) Ok, ok. Don’t shot. I am reducing speed. You may approach.

What do you mean? You’re not going to deliver me, don’t you? Don’t you?... You bastard!

You better tell me why this pirate seeks you or I will deliver you dead.

You try… (sobs) I thought you we’re different.

Nice try. Your time is running out. The Mamba is approaching. 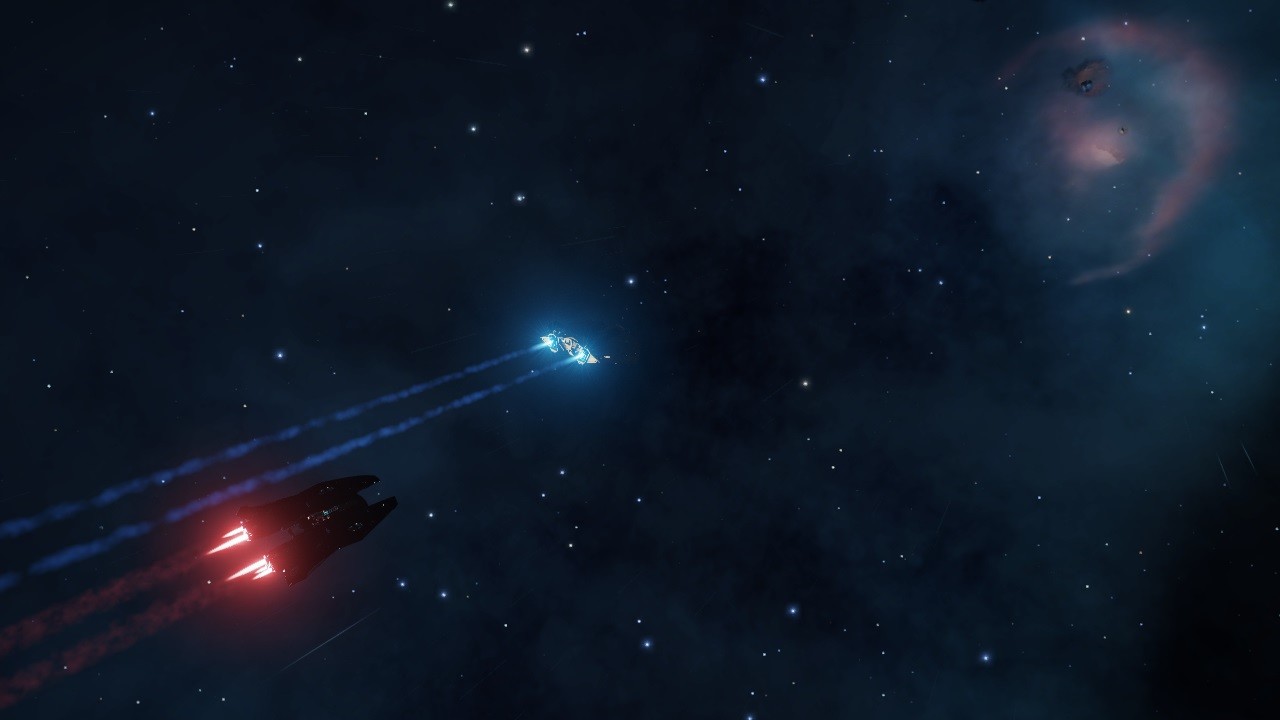 The Pirate Mamba approaching the Orion

And you didn’t say anything to me. You risked my life and my ship. I should toss you out of the airlock. 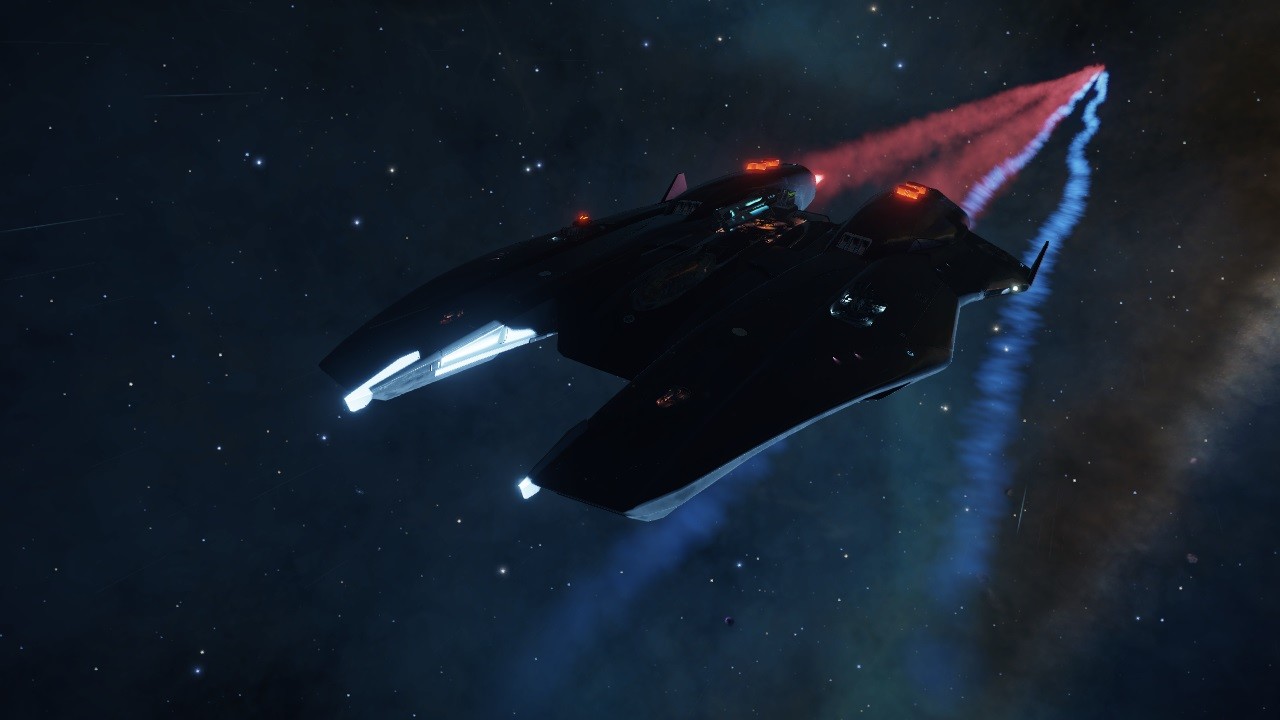 The Pirate Mamba close to the Orion

You’re far away from the Pegasi Sector, Oblivion.

(Comms buzz) Not your business. I can take the girl and leave you on your way on your shiny ship, or I can retrieve her corpse from your debris. It makes no difference to me. What will it be? (Comms buzz) 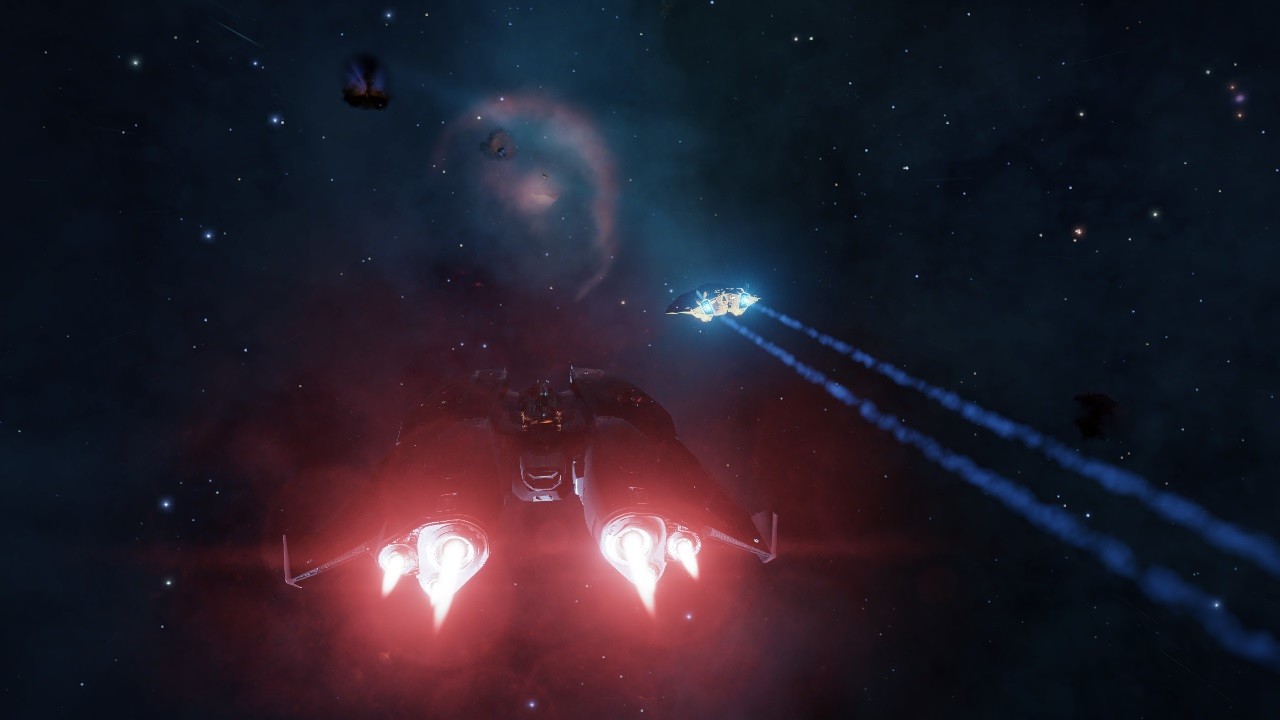 The Pirate Mamba about to board the Orion

I’ve heard Mambas are fast. Let’s check it out.

SHUT UP you liar. CURSE ME. 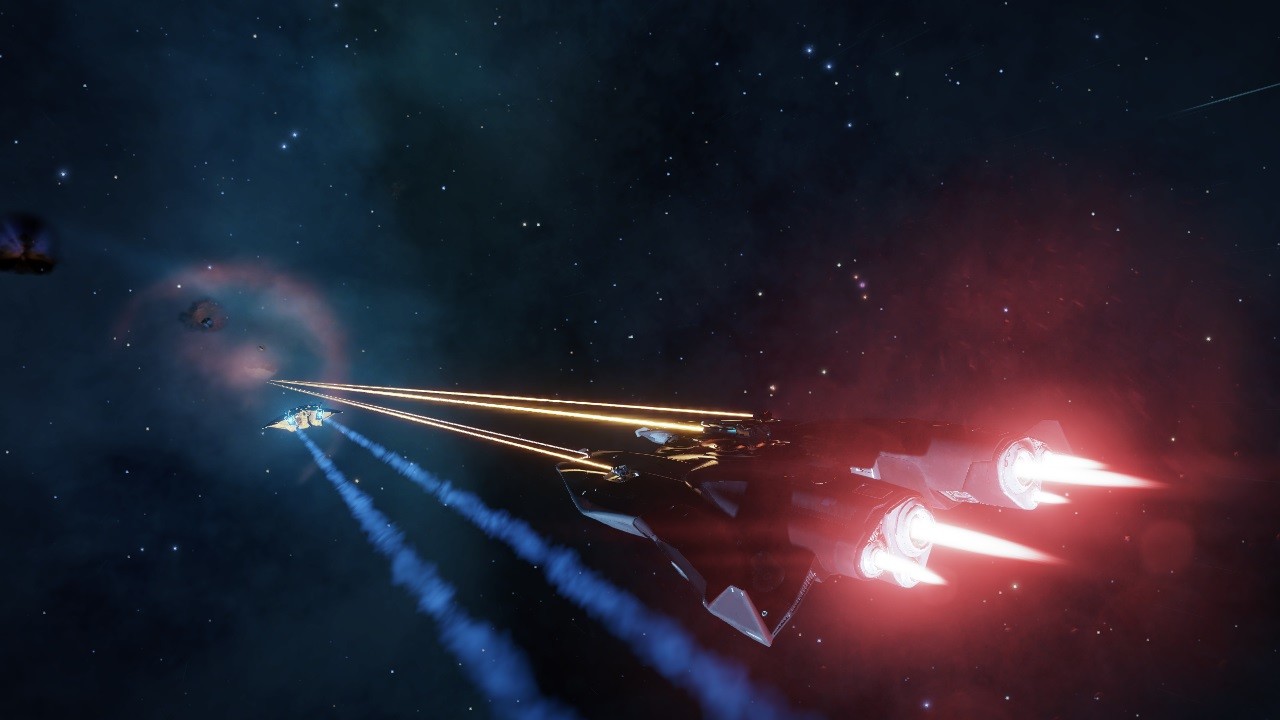 The Oblivion pursuing the Orion

You cannot outrun him. 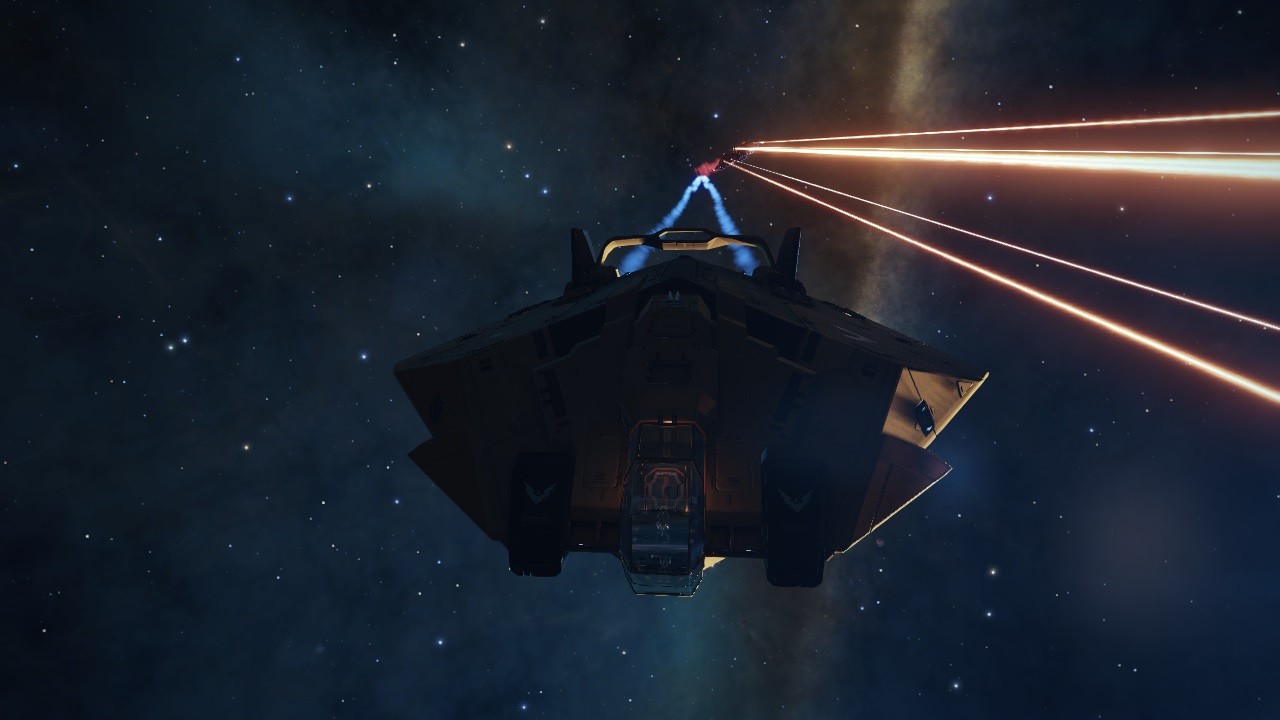 The Oblion firing on the Orion 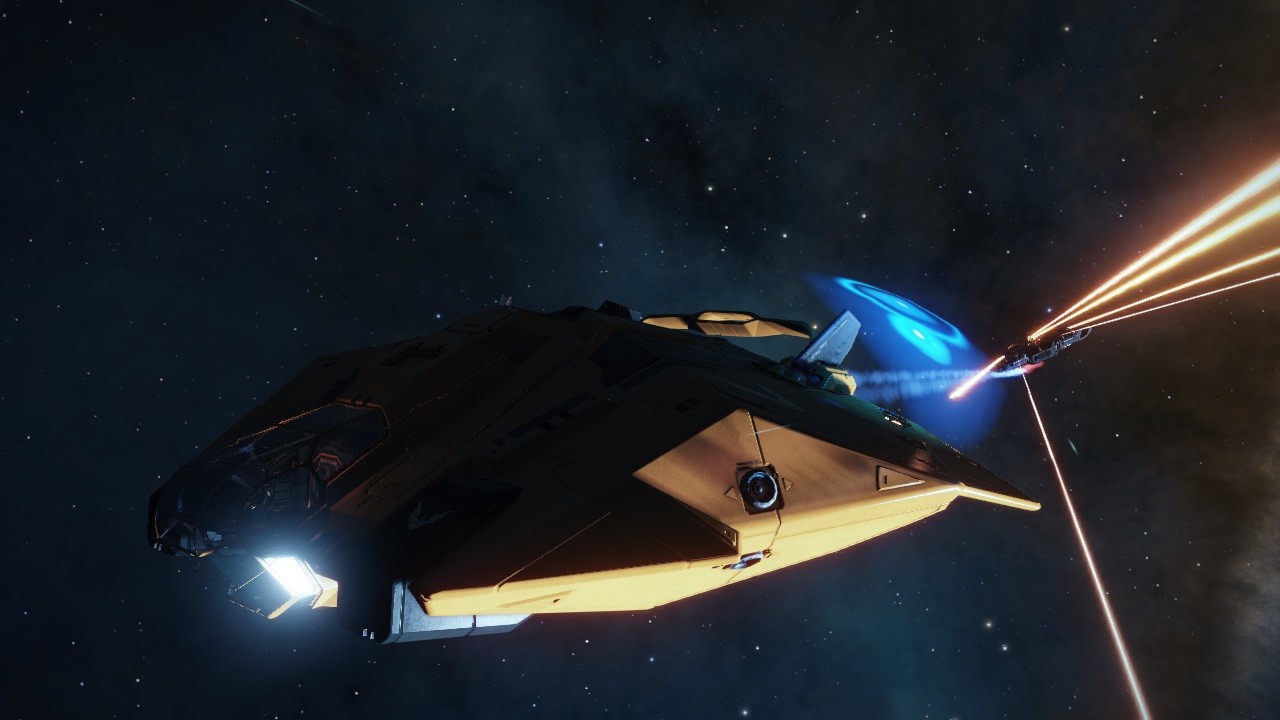 The Oblivion hitting the Orion with its lasers

This is an exploration ship. The shields won’t hold much more.

What are you going to do?

Well. You better think something fast. He’s on us. 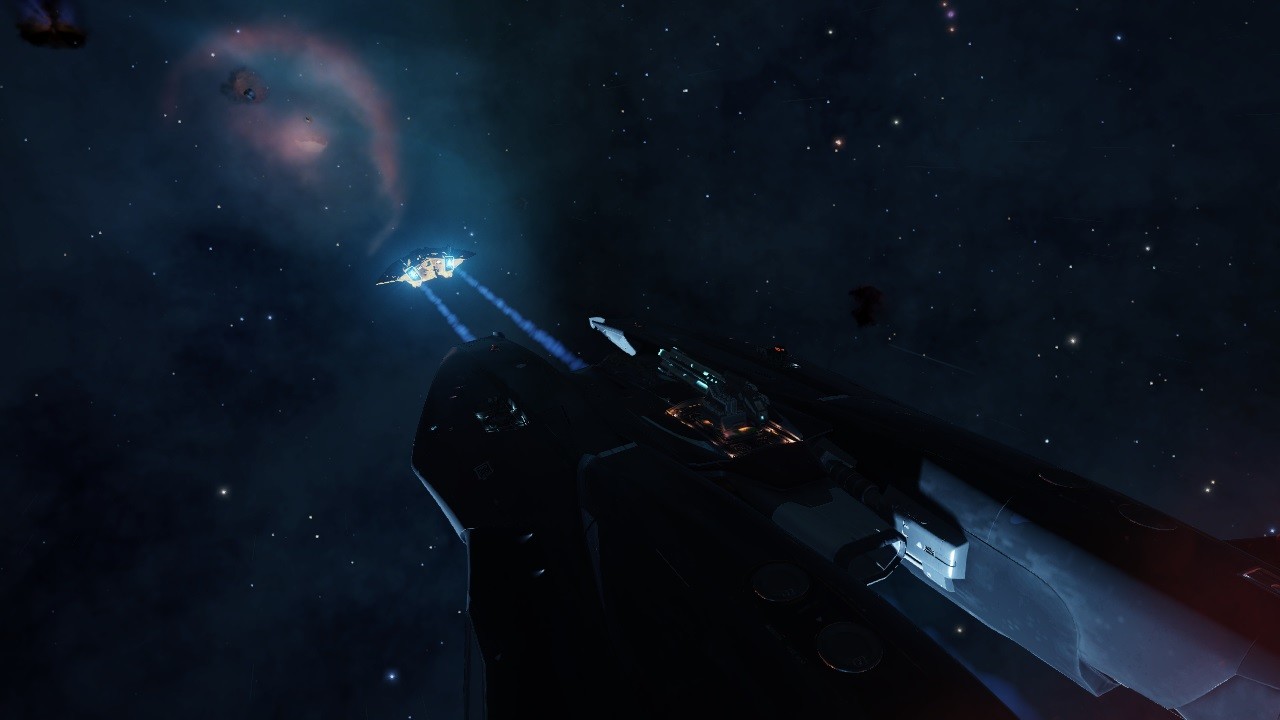 The Oblivion outrunning the Orion 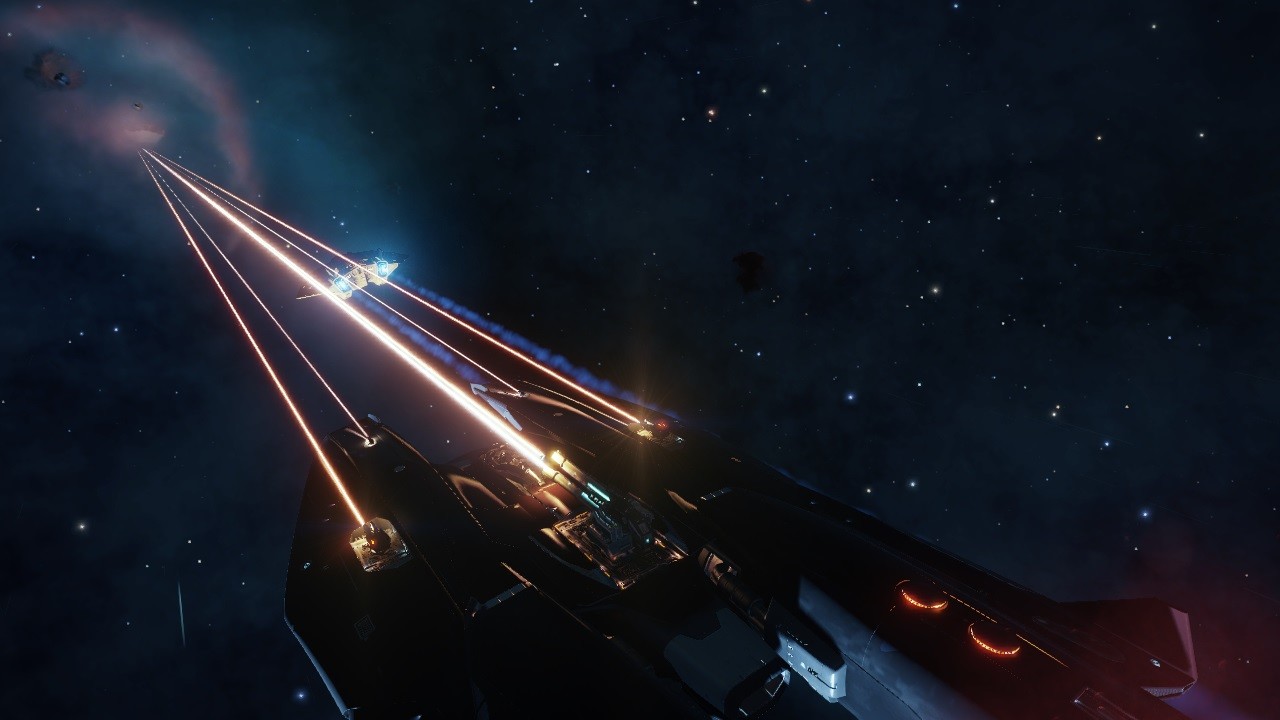 The Oblivion firing all its lasers on the Orion

I don’t think so. Follow me if you can.

What are you doing?

I cannot hold this fire anymore. I’m activating the Guardian Frame Shift Drive Booster. I cannot land in Obsidian Orbital with this Mamba patrolling the system. I’m afraid you’re coming with me.

I hope you packed for a long trip. 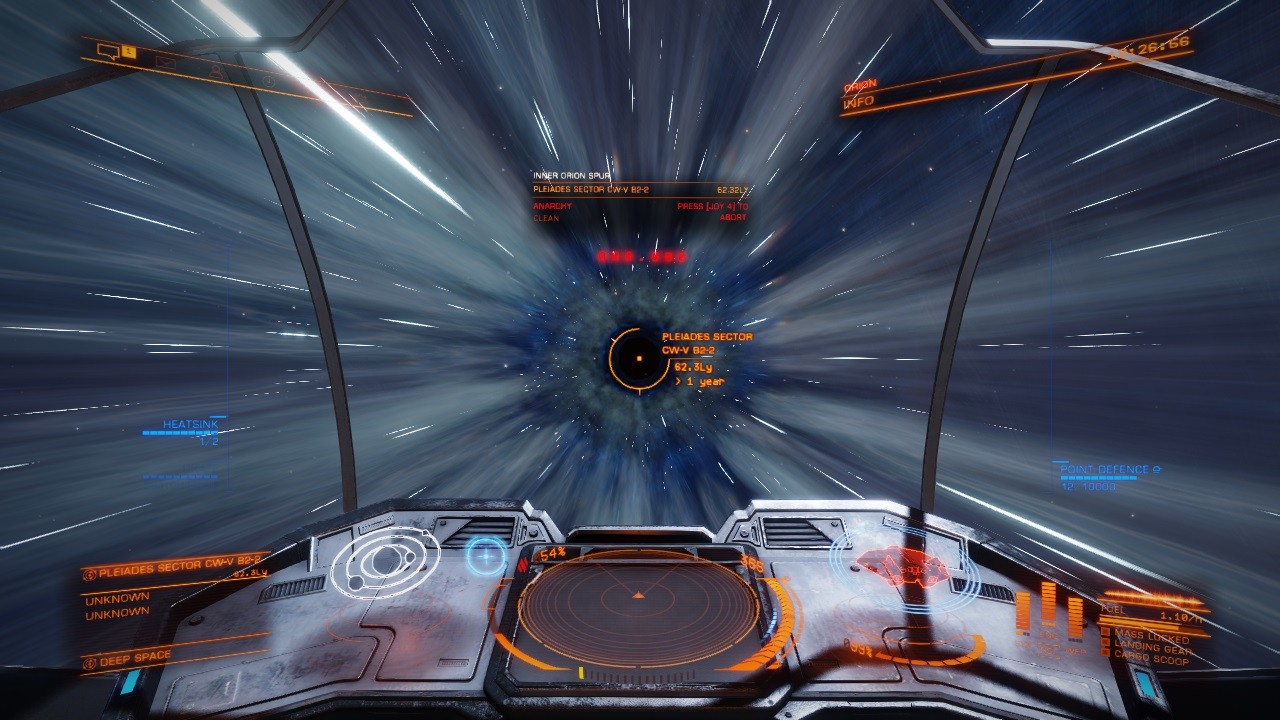 The Orion jumping to witch-space
Do you like it?
8
Shiny!