The galaxy is in turmoil; the Thargoids are an ever looming threat, and still internal conflicts and political struggles occur within the borders of human space. After the assassination of High Lord Jakken Eardley, his daughter Lyria vies for political leadership of Spearhead Charter, while Fleet Admiral Savoy leads the elite Spearhead Charter Royal Guard. The SCRG lead Spearhead Charter's military to enforce their rightful claim to the Vestige, and defend humanity from Thargoid incursions. Working with our allies, we stand to resolve the alien threat, fighting in defence of targeted systems whilst looking to avoid the need for further bloodshed on either side. All the while, Spearhead Charter is pressured by Xeria's Wrath, a powerful organisation, recently emerged, seeking to return the Vestige to a criminal haven, rampant with slavery and corruption, exploited by dictators after power for the sake of power.

While Spearhead Charter exists to defend humanity from the Thargoids, and any other aliens that may threaten our species in the future, we do not wish to fight an unnecessary war. Mounting evidence directs suspicions toward Aegis, likely a faction under the thumb of the manipulative group known as The Club. These shadowy figures have known about the Thargoid armadas long before anyone else, and prepared a mass exodus of humanity to distant worlds, murdering all witnesses. Since then they have tried to keep countless conspiracies under wraps, assassinating Kahina Tijani Loren (better known as CMDR Salomé) in an attempt to keep her silent. But she was not alone. Her allies unveiled the breadcrumbs, and since then many have worked to fit the pieces together. Aegis, The Club, they are not to be trusted - whatever GalNet may say, they control this war, and our best chance of making it through is to stop them. But while our allies work to achieve that goal, the Thargoids continue to destroy stations and kill endless innocents, and we must do what we can to keep them safe.

Spearhead Charter is loyal to the Alliance, though our faction has its roots in the remnants of an ancient martial society, which shared many similarities with the Empire. We are a friendly group of players aiming to enjoy the game as a group, with a focus on combat (both regular and anti-Thargoid) and BGS manipulation. A good opportunity for anyone wishing to join a squadron, meet some friendly players, participate in expanding a new in-game minor faction, and take part in Thargoid combat. Players of any skill level are welcome and we are always happy to help out any newer players.

As the elite force of Spearhead Charter, pilots of the SCRG are hand picked members of the Pilots Federation sworn to the protection and advancement of Spearhead Charter. Trained not only in combat against other factions but also to fight Thargoid aggressors, the SCRG follows the leadership of the Fleet Admiral. Members of the SCRG may be from any walk of life, though many find themselves exalted as heroes by the populace of the Vestige and represent systems as Knights and Lords.

In order to meet the objectives of the SCRG, multiple Divisions have been created. Royal Guard pilots choose to work within any of these, and many choose to be operatives of multiple flights.


Spearhead Charter was established in order to help defend humanity against Thargoid attacks. To allow us to achieve this, we have established the Counter-Xeno Division, a sub-group of the SCRG dedicated to combating Thargoid warships. We provide advice and training in AX combat to any SCRG Pilot who is eager to learn. We're looking to recruit more AX combat pilots, so if you're interested, even if you've never even seen a Thargoid before, we'd love to have you! The Counter-Xeno Division is led by our Fleet Admiral, Counter-Xeno Officer Savoy. 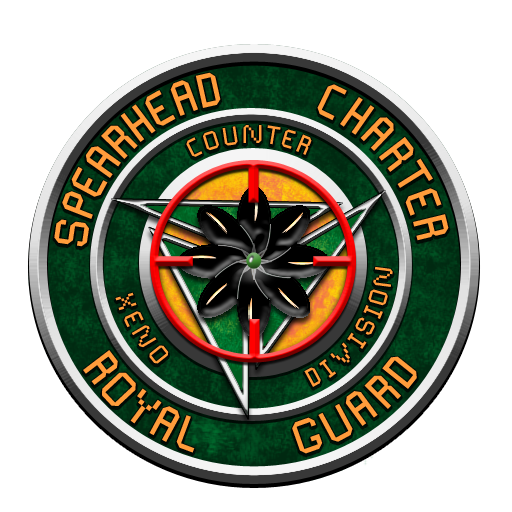 
In order to maintain its military excellence, the Royal Guard requires a corps of rangers, trained for surveillance missions. Spearhead Charter Advanced Recon pilots are built for survival deep in enemy territory, searching far and wide to support our intelligence efforts, seeking out targets well beyond our borders. SCAR pilots regularly patrol the Vestige, gathering crucial information to feed back to the Lords, Knights and military leadership, enhancing strategic decision making and ensuring efficient combat operations. This crack team of pathfinders is lead by Advanced Recon Officer [SCARO] RaptorMonkey.

Our in-game minor faction, Spearhead Charter, contests for control of the region known as the Vestige, operating from our home system Manktas. We are actively involved in its expansion and control, with operations constantly running to this end. This provides a good way for members to get involved, dipping in and out of BGS work as they choose.

Lords of the Vestige


To compliment the lore of Spearhead Charter, appointing 'Lords of the Vestige' is our manner of maintaining systems that fall under our control. The Vestige contains many highly populated Control systems, each with a close group of smaller Vassal systems around them forming a Jurisdiction. As we retake these systems, we hold votes within the group for who will become the Lord of the Jurisdiction. This person is responsible for tracking Spearhead Charter's position in the system, and reporting anything of note to Spearhead Command. They may also choose to record the system's lore and history. The Ruler gains the Title once the Control system is secured by Spearhead Charter.

Knights are chosen by a Lord for acts of valour; an impressive action within their Jurisdiction, particular dedication to the conquest of a system, etc. The Lord nominating the individual for the knighthood names the system (a Vassal system within their Jurisdiction) which they are to become the castellan for, requests permission to knight the individual from the High Lord of the Vestige, and if this is granted proceeds to anoint the new Knight. A title for the Knight is discussed and granted. The Knight then holds the responsibility of recording the lore of their system, and tracking its status. The Lords and Knights of a Jurisdiction form a Knightly Order.


The Vestige is a region of space once controlled by an isolationist faction, dating back centuries. It maintained a strong martial prowess. In 3230, the Alliance of Independent Systems was formed, and through the rest of the century expanded to its current state. Until 3290, the Vestige managed to hold off enemy forces, the Alliance encroaching on one side and the Federation expanding on the other. Gradually the Vestige became an isolated state, gaining support from the Empire due to having similar ideals and two common enemies. A strong indoctrination of the people to Imperial ideals and animosity to the Alliance and Federation, combined with a sizeable military, allowed their survival.

House Duront held the throne of Manktas, the capital system of the Vestige. In 3290, Lord Duront was assassinated by his wife Xeria. She claimed all his assets, and conquered the Vestige for herself. Soon she opened slave mines on a resource-rich moon, ignoring the relatively noble ideal of Imperial slavery, abusing her subjects. These mines eventually became the sole reliable source of income for Xeria's Vestige. Jakken Eardley, the brother of Lord Duront, led the lesser line House Eardley. On the assassination of his brother, he fled to Alioth having long harboured secret ties to the Alliance – though in the rush to escape, his wife and sons were murdered, with his daughter Lyria assumed dead. Instead, Xeria had her captured and thrown into the slave mines. Over the next 10 years, the extortion of the people demolished the steadfast indoctrination, and the borders of Xeria's Vestige began to falter. During this time, Lyria grew up and gathered a rebellion of slaves within the mines, and led them to escape, stealing a fleet of short range fighter craft. A long war culminated in the downfall of the Vestige, with its systems taken over by lesser factions.

The recent events involving the Thargoid advances was of great concern to the survivors of House Eardley. Discussing with the Alliance, a new fleet commission was issued by the Council of Admirals, in a grant entitled The Spearhead Charter. This document provided permission for a force, independently provided in its entirety by House Eardley, to officially stake Jakken’s de jure claim to Lordship of Manktas. This would benefit the Alliance, as the military strength of the systems once part of the Vestige could be rekindled, providing a considerable asset for potential war against the Thargoids.

The political structure of Spearhead Charter is a complex democratic system predominantly based on Houses, which results in the entire population holding a practically equal vote. Many ideals resembling those of the Empire remain, with this culture still heavily favoured by the populace, though certain changes have been made such as the absolute abolition of slavery, and the adjustment of economic pride to promote the sharing of wealth to bring all members of the society to a high level of prestige rather than allow a gap in status to develop. Spearhead Charter maintains all the benefits of being a member state of the Alliance of Independent Systems, but remains completely autonomous; the only requirement is that the faction harnesses the Vestige's military prowess to defend humanity from alien threats.

[More recently, Spearhead Charter has come under threat by those who escaped the downfall of Xeria's Vestige, a terrorist organisation calling themselves Xeria's Wrath. The organisation has conducted several attacks, with their first campaign resulting in the assassination of High Lord Jakken Eardley. Now, his daughter Lyria has been elected to the throne, and begins to defend the Vestige from this threat, drawing her attention away from the Thargoid threat.

More detail regarding the lore of Spearhead Charter is available in the respective History, Politics and Society sections, and the original document legitimising the faction is also available. The Vestige Herald regularly reports on the news around the Vestige.


Providing local news stories, the Vestige Herald hosts articles written by our members to expand on the lore of Spearhead Charter. If you're interested in writing articles, more reporters are always welcome; we can always have more story lines ongoing. Working closely with our Master of Lore, you will be able to guide aspects of the story to bring the Vestige to life. Some of the stories that have been written so far are listed below; while they have been grouped together based on similar subjects, many of these story lines intertwine. A full list can be found (in chronological order) in our Squadron Logbooks.

The galaxy is in turmoil; the Thargoids are an ever looming threat, and still internal conflicts and political struggles occur within the borders of human space. After the death of High Lord Jakken Eardley, his daughter Lyria vies for political leadership of Spearhead Charter, while Fleet Admiral Iapeto leads the elite Spearhead Charter Royal Guard. The SCRG lead Spearhead Charter's military to enforce their rightful claim to the Vestige, and defend humanity from Thargoid incursions.