"Pilot Autonomy... Unified as One"


Who are we?
“So, are we a group of selfless altruists helping the helpless because it warms our hearts? No, we are not. There are certainly Commanders in our ranks who fit this description, but the Paladin Consortium is a diverse group harboring a lot of mindsets. While some might be benevolent knights in white armor, others prefer earning their share with more shadowy endeavors.

Truth is though, that we come from the early days of colonization, and still carry that spirit within us. We were pioneers and neighbors to one another, helping each other to prosper and to overcome hardship in order to grow into a stronger society. We live to this credo still today, looking at the galaxy as a whole. This also means that we do not suffer bullies, we do not tolerate raiders or exploiting warbands preying on those who yearn to live in peace. Not in our space, not anywhere else.”

The Paladin Consortium has been around for a long time, featuring an established minor faction and two hands full of systems we call our own.


What are we?
“We are an association of Commanders of all trades, united by the will to promote liberty and to improve the well-being and cooperation in the galaxy. We strife to ensure safe trading, mining and exploration.”

We are traders, explorers, combat pilots, miners, roleplayers, smugglers, “privateers”. You name it. People however, who play for the single reason of disrupting gameplay for others have no place in our ranks. We despise griefing and ganking. 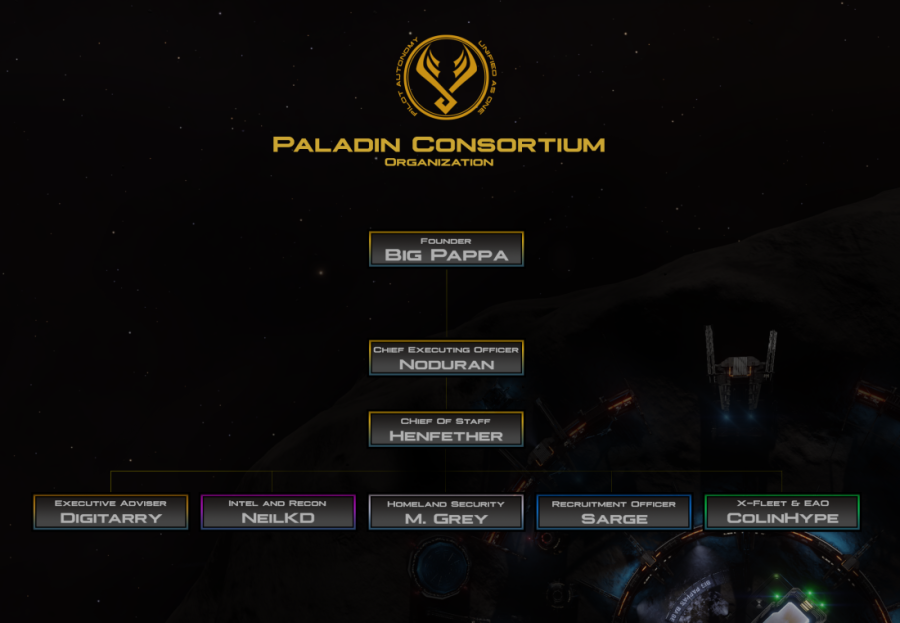 The council of Paladin Consortium

What do we do?
“While PalCon is politically independent, it is governed democratically and opposes dictatorship and tyranny as a general concept. It’s part of our agenda to help other groups against such threats, as well as being a constructive force in the Galaxy in general.”

Our events can take the form of combat operations or forming convoys of guarded trading ships. We also maintain our systems by playing the background simulation and fly together whenever the opportunity arises.
We offer a mature community in the game and on Discord. Our members range from new players to seasoned veterans, hailing from all corners of the Earth and favoring many different playstyles.
We value our autonomy as Commanders while we stand together as a group, always ready to strengthen our territory and community.

Our lore
In the early days of space colonization, when interstellar travel was still very dangerous and took days and weeks, a few colony ships left Sol for the star cluster around LFT 37, a remote system with a lot of opportunities around it.
The first settlers established outposts, and later orbital stations and extensive mining endeavors in their systems. Extraction was a very lucrative business back then and the colonies thrived and grew and expanded into the nearby systems, establishing alliances with neighbors.
When terraforming became a stable and reliable process, the early Paladins started the LFT 37 project, turning the high metal content planet in that system into an Earth-like world to become a new home for the colonists. The Paladins’ headquarter moved to LFT 37 which turned into a center of gravity for the surrounding systems.

The Houses
Over the centuries the colonies around LFT 37 developed into the Houses that now form the consortium. Still diverse, and still very much their own, they all can track their history back a long time. They stood together in a more savage period of human history where unity and helping each other out was mandatory.
Andhrimi, Isisi, Nabat, Nemet, Phoenicia, Segovite, Tavgan and Qarato, our eight Houses, may each be autonomous, but are still united as one in the Paladin Consortium, standing for these early, but still vital, virtues of humanity… with a few exceptions.

Andhrimi
The system of Andhrimi is famous for its state-of-the-art technology, and the House seated there is not only known for its expertise in trading in the most recent tech, but also for its rigorous bounty hunters, keeping the miners in the system’s planetary rings safe from pirates.

Isisi
Every society has its rebels and undesirables; those not accepted by the mainstream. The Isisi are a mix of life’s more “interesting” lifestyles.”

Phoenicia
It is said that if you want to get started on a job, you ask a Phoenician, who will lend you enough enthusiastic fire to kick a Y-Type into the main sequence. If you want to get the job finished though, you better do that yourself. The House of Phoenicia is full of ambition but lacks direction. Be careful not to dismiss the power that lies in their passionate hearts though.

Nabat
The Nabatean Mining and Transportation Company (NMTC) is a well-known quantity when it comes to bulk trading, logistics and profitable mining endeavors. The early Nabatean settlers arrived in a barren system and turned it into the economic powerhouse it is now.

Nemet
The otherwise barren system of Nemet is the main headquarters of the military Paladin fleet. House Nemet being its supervisor and also the main provider of war ships and combat pilots.

Qarato
The system of Qarato is a great place for small-scale trade in a broad range of selected products. There have been a few accusations and suspicions in the past, mainly concerning certain illegal substances and illicit cargo, but those have all been proven wrong. The Qarats are a versatile bunch of open-minded business people trading in totally legit goods.

Segovite
Everybody knows that there is not much of interest in the system of Segovit, which is why no one goes there regularly. That’s exactly why the Segovites chose it as their home. Eccentric minds, pedantic lore-writers, loners, hermits and introverted explorers living in secluded orbital stations, minor settlements on barren planet surfaces or even in their ships.

Tavgan
Law and Order are the highest virtues of House Tavgan. Based in the system of the same name, you better be extra careful to obey docking regulations and to keep papers and access codes always in reach when dealing with House Tavgan. There is a punishment for every breach of law, and you can be sure it will be enforced by the letter.

Participation
We encourage every member to do the things they enjoy, and we provide opportunity to learn new skills and trades. We ask members to share their knowledge with other members of the group, helping each other to experience everything in the game.

We foster active participation here on Inara and mostly on Discord, as well as in-game to promote camaraderie with our members.

Everyone here has a voice... If an idea makes sense we implement...

Whether our members are on PC/MAC/PS4 or XB1, we all work together to support each other and our minor faction, as well as our allies.


In order to ensure cohesiveness and a certain level of participation and involvement within the group, you must be 18 years or older.

We look forward to serving with you!

Paladin: "A person who actively supports or favours a cause..."